A Counter-Perspective on Apostasy in Islam

The controversy over the Afghan Muslim convert to Christianity has brought to the fore the issue of the Islamic law of apostasy. According to the dominant view of the Muslim scholars, the punishment for a Muslim apostate is death. By Yoginder Sikand 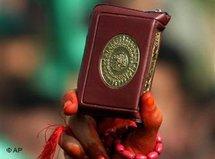 Killing apostates simply because of their change of faith goes against the Quran, Indian scholar Asad Subhani says

​​According to the dominant view of the ulama, i.e. the Muslim scholars, the punishment for a Muslim apostate is death. Accordingly, Islam thus comes to be reduced to a one-way street. While it exhorts its followers to engage in missionary work, it sternly forbids, on the pain of death, abandoning it for other religions.

This cruel punishment for Muslim apostates is, however, not the only view on the issue. Historically, this view has been challenged by other Islamic scholars. An interesting critique of the dominant Islamic perspective on the question of apostasy is provided by the Indian scholar Asad Subhani, head of the Faculty of Islamic Studies in the College of Education, Zanzibar.

In his recently published book, 'Apostasy in Islam' (Global Media, New Delhi, 2005), he argues that the death sentence for apostasy from Islam that involves a genuine change of faith is a gross violation of the Quranic commandment that 'there is no compulsion in religion'.

What the Quran says

According to the Quran, he writes, God has given human beings the choice of doing good or evil, of believing in Islam or rejecting it. Nowhere in the Quran is the death penalty for apostasy mentioned.

The Quran refers to apostasy in some ten verses, but the punishment for it is clearly suggested as being reserved for the afterlife, not in this world itself. Hence, Subhani argues, killing apostates simply because of their change of faith goes against the Quran.

Forcing apostates to recant and declare themselves as Muslims if they want to escape capital punishment when they do not actually believe in Islam is nothing short of hypocrisy, which the Quran considers a heinous sin.

Not finding support for their position in the Quran, advocates of the death punishment for apostasy draw on the corpus of Hadiths, traditions attributed to the Prophet. Subhani mentions a number of such traditions in which the Prophet is said to have ordered the killing of apostates. Subhani regards only some of these as genuine, but argues that even these need to be viewed carefully in their historical context.

Subhani claims that many of the Hadith reports that lay down death for apostates relate specifically to those Muslims who abandon Islam and actively engage in treason or what Subhani calls 'conspiracies' against Islam and the 'Islamic state'. These reports, he argues, do not apply to other apostates, who are free to choose any religion they want.

This explains, Subhani points out, why, according to one Hadith report, the Prophet did not punish a certain Bedouin who had renounced Islam. Likewise, when the caliph Umar bin Abdul Aziz learnt of some Muslims who had been imprisoned for abandoning Islam he ordered his governor, Maimun bin Mahran, to release them.

Following in this tradition, Subhani tells us, a number of leading Islamic scholars from earliest times down to our own, have opposed the death penalty for 'non-aggressive' apostates, although these voices have been and continue to be in a minority.

In approaching the Hadith reports relating to apostasy Subhani advises great caution. He reminds his readers of the number of so-called Prophetic traditions on a range of issues that are either 'weak' or later concoctions.

In this regard he cites two reports that relate to women who accepted Islam and then renounced it. The Prophet, so these reports have it, announced that the women should either repent and become Muslim again or else be killed.

Subhani analyses the chain of transmitters of these traditions, and notes among them are certain individuals who are recognised by Islamic scholars as unreliable. One of them is even said to have earned notoriety for inventing stories which he falsely attributed to the Prophet.

Hence, Subhani writes, a number of Hadith critics believe that these traditions are 'weak', and, therefore, are unacceptable.

To further back his argument against the dominant position of the ulama on apostasy, Subhani cites the case of the apostate Abdullah bin Abi Sarh, who is said to have sided with the Arab pagans against the Prophet.

However, he was forgiven by the Prophet. This suggests, Subhani writes, that 'it is not necessary that even a combatant apostate be necessarily killed'. The punishment is a matter of discretion for the judge, who can choose to sentence him to death or to imprisonment or even to pardon him.

In discussing the treatment of apostates from Islam, Subhani is particularly critical of traditional ulama of the Hanafi school of Islamic jurisprudence, with which the vast majority of the Afghan as well as other South Asian ulama are associated.

He castigates them for adopting an uncritical approach to the corpus of Hadith, ignoring both the particular historical contexts of each narration as well as the fact of numerous 'weak' and concocted traditions.

Logical fallacy in the argument

It is this approach, he says, which explains why most Hanafi scholars continue to uphold the punishment of death for apostasy. Subhani locates what he sees as a logical fallacy in the dominant Hanafi argument on the issue. Under Hanafi law, a woman, as opposed to a male, apostate is not to be killed.

Rather, her punishment is imprisonment until she repents and turns Muslim again or else dies a natural death. However, if she is also involved in promoting 'strife on earth' and 'conspiring' against Islam and the Muslims, she is to be executed.

At the same time, however, Subhani points to the fact that the reason that the Hanafi scholars do not lay down the death penalty for general apostate women (as opposed to those who promote 'strife') is because such women are not regarded as a 'threat' to Islam or the Muslim community.

Using this logic of the Hanafis against the Hanafi position itself, he argues that this suggests that simple apostasy (out of spiritual or even worldly motives) on the part of a woman or even a man does not merit the death penalty, because such apostasy is not linked to any sort of 'conspiracy' against Islam, the Islamic state or the Muslim community.

Hence, contrary to the dominant Hanafi position, the death penalty for 'ordinary' apostates, men as well as women, is actually wrong, their punishment, Subhani argues, being solely God's prerogative. As he puts it, 'People who do not want to fight against Islam and have changed their religion due to some reasons should not be touched'.

Subhani's treatment of the controversial subject of apostasy is admirable, seeking, as it does, to argue from within an Islamic paradigm against dominant Muslim understandings on the question.

However, while the distinction that Subhani draws between 'ordinary', 'non-aggressive' apostates and 'combatant' apostates is valid, he does not provide any criterion for deciding as to precisely what constitutes 'aggression' and 'conspiracy' against Islam, which he seems to argue merits the death penalty.

Surely, these need to be clearly laid down and not left to arbitrary decision. This said, Subhani's case is a very welcome contribution to a debate that has been raging for centuries in Muslim circles, often with frightful results. The argument for freedom of religion and conscience that it makes is surely a major advance on the position of the traditional ulama.

Today, more voices like his need to be heard, and louder than ever before, in order to critique the hidebound traditionalist ulama as well as hardened Islamophobes, both of whom see Islam in terms of a monolith, defined in dry, legalistic terms and having no room for internal diversity and debate.

Qantara.deThe Release of Abdul RahmanAfghan Legal Principles under Examination After having been threatened with a death sentence as a punishment for his conversion from Islam to Christianity, Abdul Rahman has been set free. Peter Philipp argues that the case continues to raise fundamental questions about the "Afghanistan Project" Christians in AfghanistanUnder Suspicion For centuries, Afghanistan remained largely isolated. Now the country is increasingly confronted with foreign influences and other religions, Christianity in particular. Islamic hardliners are fiercely resisting this development. Martin Gerner reports Koran Studies "What is the Koran?" Christoph Luxenberg's book on the history of the origins of the Koran has found wide resonance internationally. But scholars of Islam are skeptical about the work. Michael Marx summarizes the results of a Berlin conference on the subject. Correspondence: Emran Qureshi and Heba Raouf EzzatAre Sharia Laws and Human Rights Compatible?In their correspondence, Emran Qureshi (journalist and expert for Islam and human rights) and Heba Raouf Ezzat (lecturer for political science and womens' rights activist) discuss the role of the sharia in Islamic countries and in how far sharia laws are compatible with human rights. Lily Zakiyah MunirThe Koran's Spirit of Gender EqualityLily Zakiyah Munir, Head of the "Center for Pesantren and Democracy Studies", Indonesia, argues that it is not the Koran, but social convention of patriarchal cultures that women in Islamic countries are deprived of equal social status. DossierReformist Islam What possibilities does Islam offer for the reform and democratisation of modern Muslim societies? Qantara.de presents the opinions and initiatives of renowned thinkers from the Islamic world

END_OF_DOCUMENT_TOKEN_TO_BE_REPLACED
Social media
and networks
Subscribe to our
newsletter