Cultural self-awareness is gradually awakening again in Afghanistan. An exhibition in Berlin provides a glimpse of it. Contemporary paintings by female Afghan artists can be seen there for the first time. Aygül Cizmecioglu reports 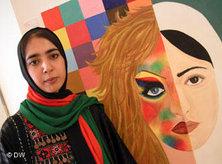 ​​Perfect weather in Berlin – the sky is a brilliant blue, and it is pleasantly warm. Rather than enjoying the sun at one of the street cafes, however, dozens of camera people, photographers, and politicians push their way through Saxony's State Mission.

A whitewashed hall, exquisite parquet flooring, and walls covered with huge paintings. In the midst of it all are four young women. They listen to the innumerable questions somewhat shyly and look away from the cameras with embarrassment. Some of them cover their dark hair with filmy silk scarves. It is an absolute premiere for the four young artists. They are presenting their works outside their native country of Afghanistan for the first time.

"I have become much more self-assured through painting. Women in my society used to be invisible," says 19-year-old Sheenkai Alam Stanikazai. Because of art, she now feels much more free.

Searching for identity with brushstrokes

Above all, it is rage that is expressed in the artists' paintings. Women's faces are squeezed into confining squares, shadowy silhouettes are lost in the crowd. Burkas are pasted all over with eyes and mouths. 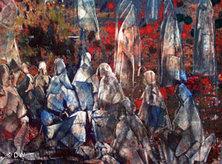 ​​Almost all the artists are in their early twenties. They were born shortly after the Taliban seized power. War and insecurity have characterized their lives until now. Education and self-determination have always been a struggle.

Today they seek their identity with brushstrokes, show themselves and their fears through paint. They have studied at the Center for Contemporary Arts Afghanistan. It is a private art school intended especially for women, which was founded by artists in 2004.

"We are not state-financed but have to arrange everything ourselves," says cofounder Rahraw Omarzad. That is something entirely new in Afghanistan, because in the past art was often misused as a means of propaganda. "But only through diversity can a society grow and establish a democratic culture. And that is precisely what we are attempting to do here."

Heavy burden of the past 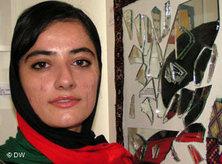 Sheenkai Alam Stanikazai: "I have become much more self-assured through painting. Women in my society used to be invisible"

​​Twenty-three young women from liberal families are now studying at the academy of arts in Kabul. They have boundless curiosity and a tremendous need to make up for lost time. Under the Taliban, the depiction of humans and animals was punishable by whipping – a strict prohibition of images in the name of Allah. Only idyllic landscapes and calligraphies were allowed. These motifs are entirely absent from the works of the young artists today.

Although that was a break with radicalism for them, it was not a break with their roots. Sheenkai Alam Stanikazai and the others describe themselves as devout Muslims. "Islam and art are not contradictions for me. Painting has a long tradition in my religion. We simply have to develop it further and show that our point of view can also be part of Islam."

Pigeonholing also in the West

That is why the four artists have come to Berlin. They have had discussions with German art students here and visited countless museums and galleries. Khadija Hashemi's almond eyes light up when she talks about it – art everywhere, it is like Ramadan and a birthday at the same time.

Yet the 21-year-old has observed that her homeland is not the only place where they are pigeonholed. "Many people here in the West smile condescendingly at us and think that we are not really talented, particularly since women in Afghanistan are constantly oppressed anyway. Perhaps the exhibition can help straighten this picture a bit, because we are not that different from the women here at all."

Khadija Hashemi, Sheenkai Alam Stanikazai, and the others want to break down clichés – on the Spree, just as on the Hindu Kush. That is why they are not only studying, but are also teaching younger art classes and visiting girls in the Afghan provinces, in order to pass on a little of their pioneering spirit. After all, it is not only possible to change things with words and politics, but with brush and paint as well.

END_OF_DOCUMENT_TOKEN_TO_BE_REPLACED
Social media
and networks
Subscribe to our
newsletter