Afghan Refugees in Iran
The Lowest of the Low

Afghans in Iran constitute one of the largest refugee populations in the world. In recent months, reports sprung up claiming thousands of them have been executed. Now Iran and Afghanistan are increasingly arguing over how many have been killed, and under which circumstances. Iason Athanasiadis reports from Kabul 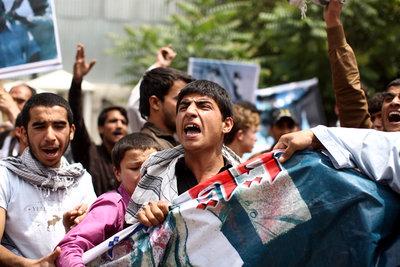 Is a reformist movement emerging in Afghanistan? Angry demonstrators in Kabul are beginning to organise protests against suffered injustice

​​ It was not just the solid traffic jam that grabbed motorists' attention – immobile even by the Afghan capital's weary standards – but the unprecedented sight of assertive rows of women marching down the street. Shrouded in sky-blue burqas or racy Iranian-style colourful scarves draped over flops of dyed hair, they boldly advanced down the middle of the boulevard, forsaking the diffidence most Afghan women display in public, as if entering battle.

Ahead of them, clumps of angry young men pushed against lines of riot police perspiring outside the high walls and sprawling compound of the Iranian embassy, one of the largest in Kabul. The police gripped clubs, Kalashnikovs and battered shields; the demonstrators held up anti-Islamic Republic of Iran banners whose slogans would have shocked even the most hardened of last summer's Green Movement demonstrators.

"Death to Iran's Mullah Regime" one banner proclaimed; "Death to Khamenei & Ahmadinejad" said another, condemning Iran's two top leaders. Other posters showed long lines of forlorn young men lackadaisically dangling from the end of nooses, the victims of capital torture. A legend demanded that Iran's allies in Afghanistan be sought out and killed as punishment for hanging Afghans in Iran.

The formation of civil society in Afghanistan?

But what was the real story behind this impressive-looking and unprecedented demonstration? Are Afghans turning their criticism away from NATO or Pakistan and towards their western neighbour? Are we witnessing seminal moments in the formation of a civil society? 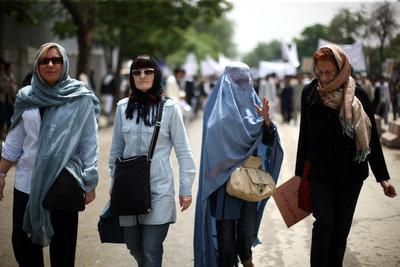 Forsaking the diffidence most Afghan women display in public, these women demonstrators walk through central Kabul in what passes for modern outfits in Afghanistan's complicated gender landscape

​​ "To untrained eyes, the hallmarks of a new progressive movement were all there", wrote commentator Nushin Arbabzadeh in a June piece for the British Guardian titled "Afghanistan's False Hopes for Reform". "Women, men and even schoolboys were marching alongside each other, demanding justice regardless of gender, ethnicity or even the category of crime that had led to imprisonment to begin with. (…) They were curious protests, creating the impression that a reformist movement similar to the one in Iran was emerging in Afghanistan."

I came across one of the open-air sewers festering all around Kabul. Nearly a decade since the American invasion of Afghanistan, the country's capital lacks even very basic sanitation. Locals complain that, whereas the Soviets built infrastructure and sent a whole generation off to Moscow to be educated, the American presence has very little to show other beyond a ramshackle national army of dubious allegiance and NGOs employing cosseted Westerners on inflated salaries.

"At least under the Taliban," one demonstrator told me, "there was a mullah at every crossroads dealing out sharia. With the knowledge that your hand would be cut off if you stole, you could leave 1,000 Afghanis on the ground and pass by the next day to pick it up, untouched."

Zalmai Ahmadi, my interview partner, said that his brother was one of those executed in Iran over the previous year.

"My brother was imprisoned at the Iranian border with Afghanistan," he told me as we wandered away from the screaming crowd ringed by riot police. "Our father went and begged them to release him but they didn't respect him."

"We saw my brother one last time before he was executed. His arm was ripped out of its socket and one leg broken. He had been tortured for a year, then they executed him anyway."

Demonstrators claimed 3,000 Afghans have been killed in recent years in Iran, the world's leading executioner after China. Abdul Zahir Faqiri, a spokesman for the Afghan Foreign Ministry, confirmed several executions but could not give a number. 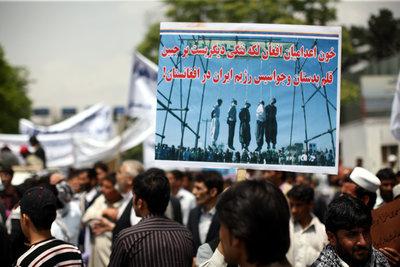 Victims of capital torture: Placards depict images of hanged Iranian Kurds, another minority that is discriminated against by the Islamic Republic of Iran

​​ Iran's government denies the figure of 3,000 executed and puts the number at just three Afghans who, it claims, were "drugs and weapon smugglers".

"They would have met the same fate even if they were Iranians," an Iranian Foreign Ministry official said, speaking on Afghan radio.

For Columbia University professor Hamid Dabashi, Afghans in Iran "have indeed been subject to institutional and popular racism of varied sorts". In the summer of 1997, at the height of the Afghan refugee wave in Iran, Dabashi witnessed "unsurpassed racism towards Afghan refugees".

Iran's state-run television Press TV blamed an Afghan TV channel for organizing a series of anti-Iranian demonstrations in Kabul and accused it of "taking its cue from the US and Israel".

"The protests have largely been provoked and organised by a TV channel named 'Today in Kabul' which is owned by a member of Afghanistan's National Parliament," an article on the state-owned Press TV website claimed.

"While the TV channel remains silent about the US-led saturation bombings of Afghan cities, which regularly results in the death of thousands of innocent civilians, it accuses Iran of human rights violations over the execution of Afghan drug-smugglers."

Back at the demonstration, more horror stories of Iranian atrocities were forthcoming. Once news spread that a Dari-speaking Western journalist was wondering around freely, relatives raced to tell their stories about the lives of Afghans in Iran.

"Every day our relative was in hospital recovering from the beating administered to him by the police", Arum Ahmadi said, "the doctors drew blood from him for their emergency stocks." 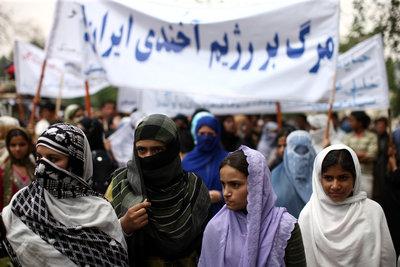 ​​ Dariush, a young man speaking in an Iranian regional accent from the city of Shiraz said that his family was forced by the Iranian government to pay $1,200 in costs for their executed relative's funeral. Not only were they not allowed to attend it, they were subsequently expelled from the country.

"Growing up in Iran, I was kicked by the Iranian boys, told I was a dirty Afghan that smelled and forced to sit alone at the back of the class," he said. "It's true that our economy is weak here in Afghanistan but that's no reason to force us to leave."

Iason Athanasiadis is a writer, photographer, political analyst, and television producer who has contributed to a range of media, including the BBC, al-Jazeera, Channel 4, the Christian Science Monitor, the International Herald Tribune, The Guardian, and Newsweek. He specializes in the Middle East.

Presidential Election in Afghanistan
Low Point of an Electoral Farce
Following his controversial re-election, the Afghan president Hamid Karsai can expect energetic resistance from the opposition under Abdullah Abdullah. Andreas Zumach finds it easy to understand why Abdullah decided not to take part in the run-off

Baha'i in Iran
A Life of Repression
The situation for Baha'i in Iran has been deteriorating ever since the "Islamic Revolution" thirty years ago. Yet persecution has intensified under President Ahmadinejad's rule. By Katajun Amirpur

END_OF_DOCUMENT_TOKEN_TO_BE_REPLACED
Social media
and networks
Subscribe to our
newsletter