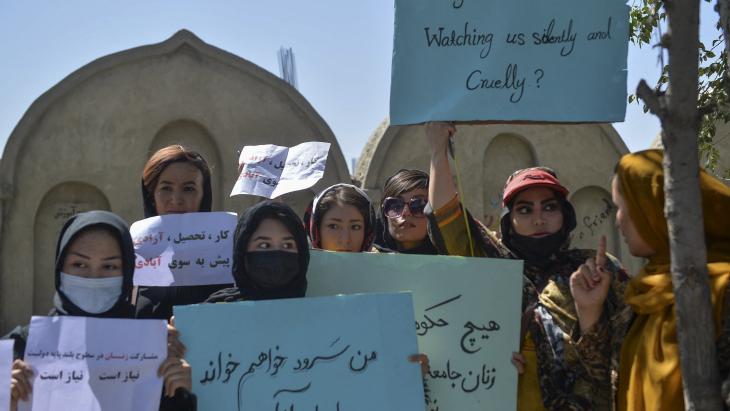 Despite their promises of "moderate" rule, the Taliban have announced the end of mixed classes in universities and a ban on sports for Afghan women. Many are taking the streets to denounce the worrying measures, only to be met with violent repression. Cyrielle Cabot reports

Shouting "Freedom, freedom" and "Resistance", anti-Taliban demonstrators took to the streets of several Afghan cities once again on 8 September, as they had sporadically since the group rose to power on 15 August. On the front line were activists, but also dozens of Afghan women claiming the preservation of their rights and their freedom.

The previous day, the Taliban unveiled their interim government. And despite promises of an "inclusive" cabinet, no women were featured on the list. "When the government was announced, things became clear: women will not be present in politics and there will be no tolerance," said one demonstrator in Kabul.

"They can't erase us from society"

"We are on the streets in order to maintain our basic rights: rights to education, to work and to political participation. We want to make the Taliban understand that they cannot erase us from society," a young woman in Kabul said a few days earlier, as reported by the NGO Human Rights Watch.

Since returning to power, the Taliban have tried to show a more tolerant face to the world. But many women fear nevertheless a return to the past: under the first Taliban rule (1996-2001), they vanished from the public space.

The West's mission in Afghanistan is ending as it began — "with grandiose neo-colonial posturing."

A deluge of books, movies, series and cover stories: ever since the events of 9/11, the West has seemed almost manically preoccupied with Islam. Yet this has rarely led to deeper ... END_OF_DOCUMENT_TOKEN_TO_BE_REPLACED

Twenty years after 9/11, the world is faced with the dual challenge of Islamophobia and anti-Westernism. Ahmet Kuru argues that Muslims in the West, well versed in both Western ... END_OF_DOCUMENT_TOKEN_TO_BE_REPLACED

Two decades after the attacks of 11 September 2001, the West faces the shattered debris of its failure – not only in Afghanistan, but also in Iraq, Syria, Libya and Yemen. What ... END_OF_DOCUMENT_TOKEN_TO_BE_REPLACED

Twenty years after 9/11, the United States is recalibrating its war policy. However, its assertions that the era of endless wars is over are a myth, writes Maha Hilal END_OF_DOCUMENT_TOKEN_TO_BE_REPLACED 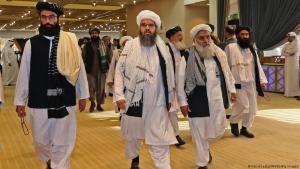 In league with the village mullahs: the Taliban have taken Afghanistan by storm. The rebels' victory is the result of a social revolution in Afghanistan, writes Joseph Croitoru in ... END_OF_DOCUMENT_TOKEN_TO_BE_REPLACED

Following the Taliban's power grab, members of the Hazara minority fear they will be targeted. Those who can, escape. Others have joined the armed opposition. But for many, there ... END_OF_DOCUMENT_TOKEN_TO_BE_REPLACED
Date:
Mail:
Send via mail

END_OF_DOCUMENT_TOKEN_TO_BE_REPLACED
Social media
and networks
Subscribe to our
newsletter