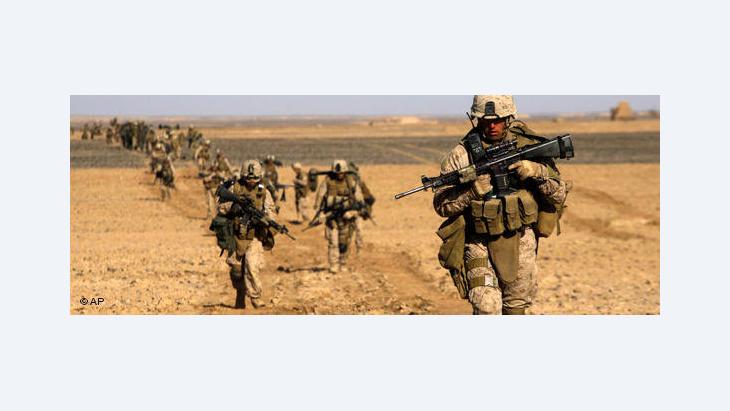 Afghanistan and the West

﻿The West is well on the way to failing at its most important mission in the war in Afghanistan: creating a stable country. This is due not least to a few key strategic mistakes. Tobias Matern comments

An Afghan woman describes the mental state of her countrymen as follows: We have cherished hopes of peace again and again for more than three decades now; sometimes this wishful thinking lasts a week, sometimes a month, sometimes a year.

But now all hopes have once again been shattered. Fear reigns. Afghanistan, in autumn 2011, ten years after the invasion of western troops: most of the people in this war-torn country now view the prospect of a stable future as nothing but an illusion. From every perspective.

In the aftermath of the assassination of former president Burhanuddin Rabbani, chances for reconciliation between the hostile fronts have become even more remote. The modicum of trust that Rabbani had managed to build up in his function as chair of the so-called High Peace Council set up by his successor Hamid Karzai has proven to be fragile.

Rabbani, the ex-mujaheddin fighter, who himself had anything but a peaceful past, ended up paying with his life for trying to find a peaceful solution for his country.

No talks with fundamentalists 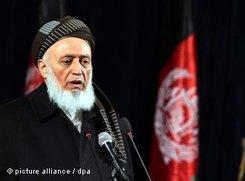 Ex militant peace broker: "Rabbani, the ex-mujaheddin fighter, who himself had anything but a peaceful past, ended up paying with his life for trying to find a peaceful solution for his country," writes Matern

​​Following the fatal bombing, the ex-president's companions in the movement known in the West as the Northern Alliance feel still more justified in their scepticism. They have always felt uneasy about negotiating with their archenemy, the Taliban, seeing no sense in trying to reason with fundamentalists.

Karzai deliberately chose Rabbani from amongst the ranks of these critics to head the peace council. But trying to convince the mujaheddin to venture further advances toward the Taliban now seems futile.

US defence minister Leon Panetta completely overlooks this internal Afghan dynamic when he insists that the West is making progress in the battle against the Taliban and that Rabbani's death represents an "isolated incident". As difficult as it is to make any predictions regarding Afghanistan, the chances have increased that the country could once again be heading toward civil war.

As difficult as it already is to achieve peace within Afghanistan, the role of the neighbouring nations places an additional burden on these efforts. After the spectacular Taliban attack in Kabul's embassy quarter last week, the US Administration cast its reserve to the winds, openly accusing its official ally Pakistan and its secret service of having links to the crime.

Pakistan's alleged goal is to deploy supposedly controllable fighters to ensure it will have a say in the post-war order in Afghanistan. Negotiations for peace in the Hindu Kush must hence also include those pulling the strings in Islamabad – particularly as it has become amply clear that the Taliban cannot be defeated with military means. And their place of retreat is after all Pakistan.

Nor can long-term peace be achieved in the region without the cooperation of Pakistan's archenemy India and without Iran. The US Administration has neglected as yet to attempt this diplomatic tour de force. Afghanistan is thus still a country where neighbouring states fight out their own surrogate conflicts. 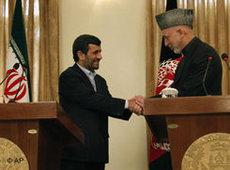 There can be no prospects for long-term peace without the cooperation of the two regional stakeholders India and Iran: Pictured: Mahmoud Ahmadinejad and Hamid Karzai on 10 March 2010 in Kabul

​​When the Russian army withdrew from the Hindu Kush in the late 1980s, the West simply abandoned the region. No matter how much the coalition insists on its long-term commitment, the people in Afghanistan have lost faith. The West is well on the way to failing at its most important mission in the war in Afghanistan: creating a stable country. This is due not least to a few key strategic mistakes.

The urgent desire to launch negotiations with the Islamists, for example, grew out of a position of political weakness. US President Barack Obama's announcement that all fighting units would be withdrawn from the Hindu Kush by 2014 was motivated more by conditions in Washington than those in Kabul.

Obama wanted to present the war-weary Americans with an exit strategy. His allies gratefully jumped on the bandwagon, because the other countries in the West are just as tired of dealing with Afghanistan.

However, the plan for withdrawal brings to light a central problem: at the time of Obama's announcement, the war between the western troops and the Taliban was at an impasse. It is true that the ISAF allies have been able to eliminate numerous Taliban commanders and to liberate certain regions from Islamist power. But the insurgents have reacted by switching to asymmetrical war tactics, with spectacular attacks on emblematic institutions and high-ranking figures like Rabbani.

The Taliban most definitely do not have the feeling they are losing the battle. Why should they negotiate a peace when all they have to do is wait for the western powers protecting Karzai's regime to leave the scene?

Developments in the Hindu Kush are taking a turn that offers little reason for optimism.

Home
Print
Newsletter
More on this topic
10 Years after 9/11: Terror in the Name of VirtueAfter Bin Laden's Death: Time to Talk to the Taliban?
Related Topics
All Topics
Date:
Mail:
Send via mail