Cultural treasures of various origin were stored in the Afghanistan Museum in Switzerland during the country's long civil war. Now the objects are being packed up again to be shipped back to the National Museum in Kabul. Aslan Khassan reports 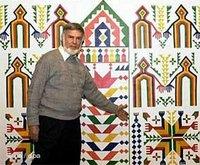 Paul Bucherer, director of the Afghanistan Museum in Exile

​​After 23 years of war in Afghanistan, not only were many cultural artifacts destroyed or had disappeared, everyday culture and traditions also suffered.

In 2000 in Bubendorf, in the Swiss canton of Baselland, Paul Bucherer undertook a heroic rescue of a trove of cultural treasures. The director of the Afghanistan Museum in Exile wanted to save cultural monuments from the plundering and destruction brought by the Afghan civil war.

The idea for an Afghanistan Museum in Exile was already developed in 1998. Paul Bucherer, then director of the Afghanistan Institute in Bubendorf, was addressed by the Afghan war parties:

"There were Afghans from the Taliban side as well as from the North Alliance," recalls Bucherer. "There were Taliban groups with very different motivations, among them a group that was very nationalistic. These people were very conscious of the threat to their own culture, and they wanted to save it."

When the Afghanistan Museum opened in Bubendorf in October, 2000, it was full of countless archeological finds. Among other items was a bronze phallus said to have been placed by Alexander the Great in the foundations of the Afghan city of Ai Khanoum.

A gargoyle in the shape of a dog's head apparently represents Peritas, Alexander's loyal attack dog. In addition to artistic handcrafts and historical objects, many everyday objects were also included in the museum: clothing, water pipes, furniture and a rug with helicopter motifs from the period of Soviet occupation.

Bucherer says the museum made a point to collect these kinds of everyday objects so that the next generation of Afghans will be able to trace the history of their home country. The museum is situated in Switzerland, the center of Europe, to serve as a showcase for Afghanistan. 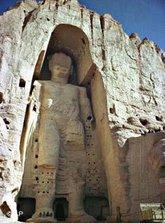 A partly demolished Bamiyan statue - In a country at war, there is no guarantee for the protection of its cultural heritage

​​Bucherer says that thousands of museum visitors have experienced a very different Afghanistan – a cultivated, culturally rich country – that defies the image of a land torn by war and unrest regularly conveyed in the media.

In agreement with a UNESCO treaty on cultural goods, the museum has not been allowed to buy any of the objects. They are gifts on loan and entrusted to the museum for safekeeping.

The donors were often tourists who had traveled to Afghanistan. Others were aid and development workers or scientists who worked there and received the objects as gifts or bought them at the market.

Return to the Afghan National Museum

The Afghanistan Museum in Exile is a private museum. The objects were exhibited and inventoried. In October 2006 the museum closed its doors. Soon a delegation from Afghanistan will arrive and check over the inventory. Then the 1,300 objects will be handed over to Afghanistan's National Museum.

The museum's foundation is thus fulfilling the wishes of the Afghan government in Kabul. Afghanistan expert Bucherer did not expect such a quick return of the objects, and he has mixed feelings about it:

"I am certain that those responsible at the Afghanistan National Museum will do their best to protect these objects," he says. "But Afghanistan is still a country at war and full protection of these treasures cannot be guaranteed under the present circumstances."

On the other hand, however, Bucherer sees the return of the objects as an important political expression of faith in the future of Afghanistan and its reconstruction.

What remains in Bubendorf is an Afghanistan archive with original sources and documentation, as well as a comprehensive library.

Afghanistan Five Years after the Taliban
In the Grip of the Jihadists
Hopes were high for Afghanistan's democratic renewal; but no one wanted to challenge the power of the warrior princes in the north of the country. Today Hamid Karzai's government is mired in a profound crisis of confidence. By Thomas Ruttig