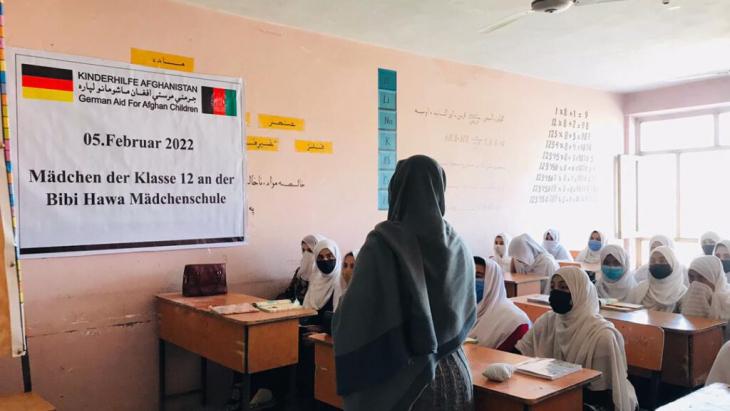 Afghanistan under the Taliban
"Girls continue to attend our schools"

Education for girls and women is still possible in Afghanistan, says Reinhard Eroes of the Kinderhilfe Afghanistan initiative. In interview with Elisa Rheinheimer, he talks about skewed media portrayals, the great hunger gripping the country and why aid organisations should return

At the end of August last year, shortly after the Taliban took power in Afghanistan, you were optimistic that your schools would continue under the new rulers – for girls as well. Has that turned out to be true?

Reinhard Eroes: Yes, that is what happened. Girls continue to attend class every day up to grade 12 in all our girls' secondary schools. Tuition in our computer classes, vocational schools and at our university has also continued without interruption. I was recently there myself and was able to observe first-hand the situation on the ground. Some computer classes and tailoring schools, where young women are trained, have only been established in the last few months, i.e. since the Taliban came to power and after the Americans – the hated occupiers – left.

This is a surprising statement, considering the horror stories of the last few months, regarded as testimony to how bad the situation is for Afghan women and girls.

Eroes: Such reporting annoys me no end. The fact that around 95 percent of Afghans are starving gets little coverage – but the fact that the Afghan girls' football team is no longer allowed to play is the dominant topic in Europe. The focus is all wrong.

Our foundation is active in the east of the country, in the provinces of Nangahar, Laghman and Kunar. Nangahar is the largest and most economically robust province, yet during my last visit I met families with five or six children whose parents worry every day whether they will be able to feed their children. This is what the majority of Afghans are worried about. 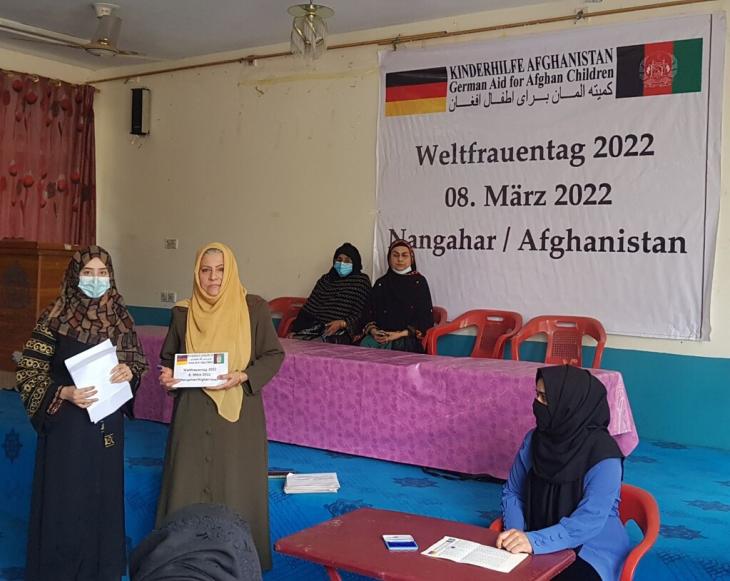 Education for girls and women under the Taliban: "Girls continue to attend class every day up to grade 12 in all our girls' secondary schools," reports Reinhard Eroes. "Tuition in our computer classes, vocational schools and at our university has also continued without interruption. I was recently there myself and was able to observe first-hand the situation on the ground. Some computer classes and tailoring schools, where young women are trained, have only been established in the last few months, i.e. since the Taliban came to power and after the Americans – the hated occupiers – left"

Truly educated women make up about three percent of the population of Afghanistan, but they are pretty much the only ones who play a role in European reporting. This imbalance annoys me no end.

"Children no longer have to fear U.S. drones"

How much has your work changed since the Taliban seized power?

Eroes: I can only speak for our schools, but the situation there has actually improved since the Taliban came to power in the summer of 2021 – because the war is now over. Children no longer have to fear American drones and U.S. troops fighting with insurgents on their way to school. Over the past 18 years, American airstrikes killed about a hundred of my students and about 500 parents.

And what has changed for the worse?

Eroes: Nothing has changed for the worse for us, except for the hunger. But Western journalists obviously don't want to hear that.

It is gratifying that you have had good experiences with the Taliban, but it seems to be a case of selective cooperation at a local level and not the strategic policy of the Taliban leadership...

Eroes: I negotiate with members of the Taliban who as provincial governors are the equivalent of Germany's state premiers. We're not talking small fry here. Some of them have known me since the 1980s, when I worked as a doctor in Afghanistan during the Soviet war.

I have been in the country for almost forty years; the Afghans call me a "German Afghan". I am in regular contact with the Minister of Education and the Minister of Health, for example, because my foundation not only supports educational projects, but has also provided 170,000 families with food parcels since October.

My standing with many Afghans, including Taliban leaders, is good. Kabul does not interest me, I am active in the East and have physical and mental freedom of movement there. By the way, your question was again wrong. 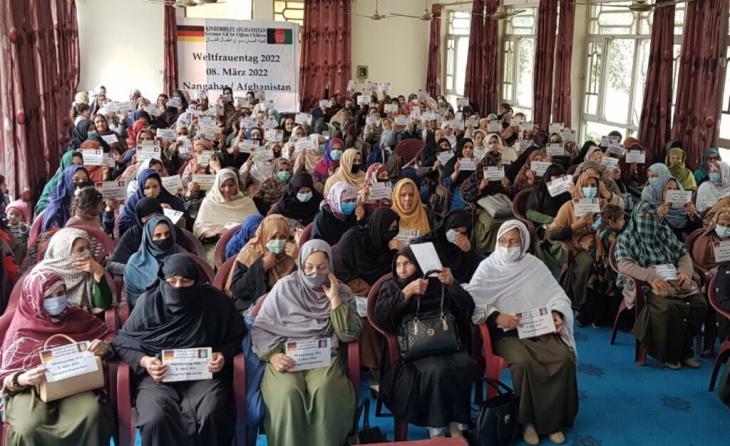 International Women's Day at a Children's Aid Afghanistan project: "In March 2022, we were the only organisation to celebrate International Women's Day," says Reinhard Eroes. "The deputy minister of education also took part in the celebrations." For Eroes, the reporting on women in Afghanistan is skewed because it is primarily oriented towards a small segment of about three percent educated women in the capital Kabul. "Such reporting annoys me no end. The fact that around 95 percent of Afghans are starving gets little coverage – but the fact that the Afghan girls' football team is no longer allowed to play is the dominant topic in Europe. The focus is all wrong"

"The Taliban are not a homogeneous group"

Eroes: You ask about "the Taliban". But there is no such thing as "the" Taliban, they are not a homogeneous group. What they have in common, however, is that most of them have had little education and have never been abroad. The cleverer ones among them at least listen to the Dari and Pashto programmes broadcast by Deutsche Welle and the BBC, which continue to be aired. Incidentally, the widespread idea here that there has only been hostility between the Taliban and all other Afghans over the past twenty years is also wrong.

Let's talk about education again. How many women are currently among your Afghan staff?

Eroes: I am one of the largest private school operators in Afghanistan: about 65,000 children attend our schools and we employ about 1,600 Afghan staff. Of these, two-thirds were and still are women. What's more, I'm fed up with reiterating that this is the case – that should be clear by now.

What arguments do you use to convince both Taliban and traditionally-minded parents and local tribal chiefs that girls should go to school beyond the age of 12? 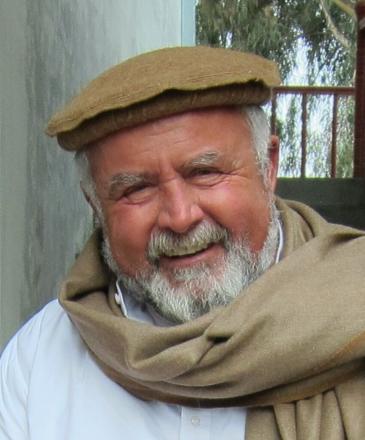 Dedicated and opinionated: doctor and former German army officer Reinhard Eroes founded the initiative Kinderhilfe Afghanistan and has known the country for almost 40 years. The initiative is one of the largest private school operators in Afghanistan: about 65,000 children attend its schools and it employs about 1,600 Afghan staff. "Of these, two-thirds were and still are women," says Eroes. "What's more, I'm fed up with reiterating that this is the case – that should be clear by now"

Eroes: I don't have to convince them, quite the opposite. There are too few schools and teachers in the country, and the need is great. In years past, we sometimes had to teach in three shifts at the schools because so many children showed up.

The United States spent about 1,200 billion dollars on security in Afghanistan, but only six percent of that was used for civilian (re)construction, such as schools and hospitals. That is the real problem.

Aren't you glossing over the situation under the Taliban by blaming all the suffering and evil exclusively on the Americans?

That would be a pity. Let's talk about the situation at the universities. Many observers in this country, but also Afghans, fear that soon only religious subjects will be taught and science subjects or history will have to be completely cancelled or completely rewritten.

Eroes: Nonsense! At our private university in Laghman province there are three faculties: agriculture, IT, and Afghan history, and everything is running normally.

At the state university in Jalalabad, the capital of Nangahar province, about 35 percent of the students enrolled in the medical faculty are women. Fifty of them receive a scholarship from us.

If things are going so well for you, what can others learn from you?

Eroes: There are hardly any Western aid organisations left in the country, they have all left out of fear.

I encourage German aid organisations to finally get on with their work. The Taliban will leave you alone.

Demonising the Taliban is just as disastrously wrong as glorifying the West's presence in Afghanistan. The West, which pumped billions of dollars into the country, has contributed to Afghanistan becoming – as Transparency International writes – one of the most corrupt countries in the world.

Since returning to power in Afghanistan, the Taliban have steadily eroded the rights and opportunities of women and girls, particularly their access to education. But Afghans are ... END_OF_DOCUMENT_TOKEN_TO_BE_REPLACED

Since seizing power in mid-2021, the Taliban have continued to restrict the rights of Afghan women and girls. At the end of 2022, they banned women from attending higher education ... END_OF_DOCUMENT_TOKEN_TO_BE_REPLACED

German imams have publicly expressed their solidarity with the women of Afghanistan. In a letter of protest, the clerics say that the Taliban regime's decree barring women from ... END_OF_DOCUMENT_TOKEN_TO_BE_REPLACED

At the end of every year, the team at Qantara.de gives you a run-down of the ten most-read articles on the site over the past 12 months. Here is a quick overview of the stories ... END_OF_DOCUMENT_TOKEN_TO_BE_REPLACED

The "Weiter Schreiben" (Keep Writing) project promotes literature from war-torn and crisis-stricken regions and has, most recently, shone its spotlight on Afghanistan. Afghan ... END_OF_DOCUMENT_TOKEN_TO_BE_REPLACED

The Islamic Republic has been unable to quell the civil unrest that erupted three months ago, after Mahsa Amini died after being detained for violating hijab rules. Now the ... END_OF_DOCUMENT_TOKEN_TO_BE_REPLACED
Author:
Elisa Rheinheimer
Date:
Mail:
Send via mail

END_OF_DOCUMENT_TOKEN_TO_BE_REPLACED
Social media
and networks
Subscribe to our
newsletter