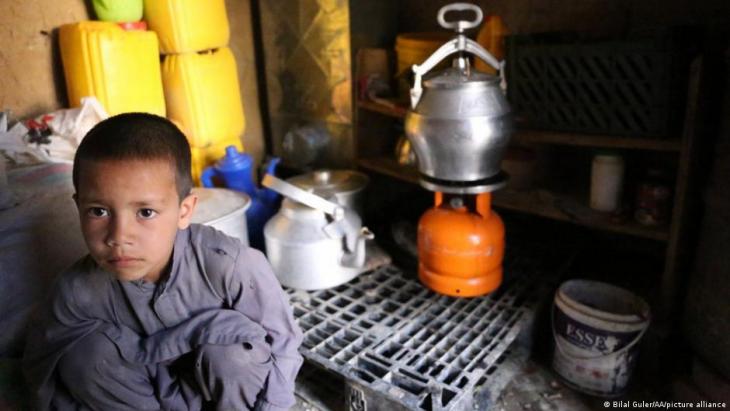 Afghanistan's humanitarian crisis
Can the Taliban avert a food crisis without foreign aid?

In view of the catastrophic supply situation in Afghanistan, UN authorities are sounding the alarm. Inflation and growing poverty are exacerbating the situation. The Taliban reportedly have an emergency programme to combat the crisis. By Shabnam von Hein

The Food and Agriculture Organization (FAO) and the United Nations World Food Programme (WFP) are warning of a surge in the number of starving people in Afghanistan. According to one estimate, 18.8 million people are currently suffering from hunger every day, FAO representative in the Afghan capital Kabul, Richard Trenchard, said on 11 November.

That number could rise to 22.8 million by the end of the year, including more than three million children under the age of five. They urgently need aid: food, drinking water, medical care and decent shelter in winter. The total population of Afghanistan is around 39 million.

No money for food

A few days ago, WFP Executive Director David Beasly named some of the reasons for the humanitarian crisis in Afghanistan: sharply increased costs for fuel, food and fertilizers. At the same time, poverty is growing: "Hardly anyone in Afghanistan has money right now," says Hamidullah Khadem, head of the Chamber of Industry in Herat province, in interview. "In the industrial area of Herat alone, 70 percent of the companies have gone out of business. There is no demand. Purchasing power has dwindled tremendously. Civil servants and employees in the public sector hardly get paid."

There is no chance of survival for smaller companies, such as silk manufactories or brickworks. The unemployment rate is rising every day, and with it the number of people who can no longer afford their daily bread. "Many of my acquaintances and friends are selling furniture and kitchen appliances such as their fridges just to be able to buy something to eat," says a women activist who does not want to be named. "Those who can leave the country are going." 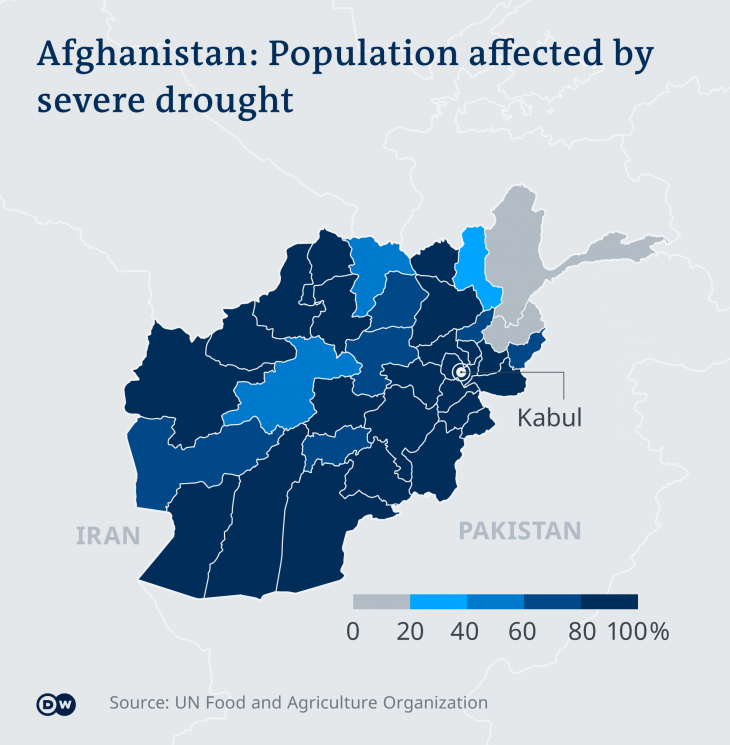 Poverty is growing: unemployment is rising every day, and with it the number of people who can no longer afford their daily bread. "Hardly anyone in Afghanistan has money right now," says Hamidullah Khadem, head of the Chamber of Industry in Herat province, in interview. "In the industrial area of Herat alone, 70 percent of the companies have gone out of business. There is no demand. Purchasing power has dwindled tremendously. Civil servants and employees in the public sector hardly get paid"

Those with money are at risk

The security situation in Afghanistan under the Taliban has deteriorated along with the economy. There are ever more reports of kidnapping and hostage-taking of businessmen and others with money. Kabul-based economic expert Khanjan Alokozay revealed that in the last two months, more than 40 shopkeepers and businessmen have been kidnapped in different parts of the country, and that some of them had also been killed.

Afghanistan's economy will shrink by up to 30% this year, according to the International Monetary Fund (IMF). Afghanistan's GDP in 2020 was only around $20 billion. And according to the World Bank, 43% of that was based on aid money from abroad. Before the Taliban takeover, 75% of public spending came from foreign aid grants. That foreign funding was stopped after the Taliban came to power in August. In addition, most of Afghanistan's foreign currency reserves abroad were frozen.

Although the UN said it secured 1 billion U.S. dollars in humanitarian aid pledges for Afghanistan to prevent a crisis, donors still face challenges in making sure the funding is channelled through legitimate aid agencies on the ground so it actually reaches those in need. Germany is among the donors, providing €600 million in humanitarian assistance, €90 million of which is going to the WFP. However, the WFP said in a press release that current funding is a "drop in the ocean" to meet the food and nutrition needs in Afghanistan. To meet the task at hand, the WFP said it may require as much as $220 million – per month.

"The Taliban have a plan"

"To fight against our problems, we need access to our frozen assets abroad, and also the possibility of participating in the international payment system," said Mohammad Younis Mohmand, head of Afghanistan's trade and investment chamber. 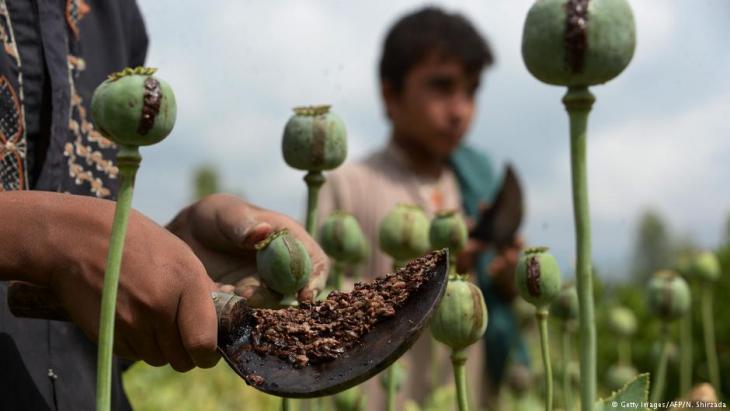 Cash crops over staples: three of the last four years have seen record levels of opium production in Afghanistan, according to the United Nations Office on Drugs and Crime (UNODC). Even as the coronavirus pandemic raged last year, the UNODC reported a 37% increase in poppy cultivation in Afghanistan

Mohmand said that the Taliban would then be able to prevent the collapse of the economy and alleviate the suffering of the people. The Taliban are currently planning an emergency programme to reduce the number of unemployed people and address hunger in the country. Taliban government spokesman Zabiullah Mujahid announced that thousands of unemployed people would be able to participate in a "work for wheat" scheme.

The concept foresees participants digging out canals and basins during the winter to mitigate future droughts. However, it is unclear where the Taliban will get the wheat. The ousted government announced back in July that the drought meant Afghanistan would have to import one-third of its annual wheat requirements.

Since seizing power in mid-2021, the Taliban have continued to restrict the rights of Afghan women and girls. At the end of 2022, they banned women from attending higher education ... END_OF_DOCUMENT_TOKEN_TO_BE_REPLACED

Since returning to power in Afghanistan, the Taliban have steadily eroded the rights and opportunities of women and girls, particularly their access to education. But Afghans are ... END_OF_DOCUMENT_TOKEN_TO_BE_REPLACED

German imams have publicly expressed their solidarity with the women of Afghanistan. In a letter of protest, the clerics say that the Taliban regime's decree barring women from ... END_OF_DOCUMENT_TOKEN_TO_BE_REPLACED

At the end of every year, the team at Qantara.de gives you a run-down of the ten most-read articles on the site over the past 12 months. Here is a quick overview of the stories ... END_OF_DOCUMENT_TOKEN_TO_BE_REPLACED

The "Weiter Schreiben" (Keep Writing) project promotes literature from war-torn and crisis-stricken regions and has, most recently, shone its spotlight on Afghanistan. Afghan ... END_OF_DOCUMENT_TOKEN_TO_BE_REPLACED

The Islamic Republic has been unable to quell the civil unrest that erupted three months ago, after Mahsa Amini died after being detained for violating hijab rules. Now the ... END_OF_DOCUMENT_TOKEN_TO_BE_REPLACED
Author:
Shabnam von Hein
Date:
Mail:
Send via mail

END_OF_DOCUMENT_TOKEN_TO_BE_REPLACED
Social media
and networks
Subscribe to our
newsletter