Last week, the US Military reported that Afghanistan's mineral resources are worth the equivalent of one to three trillion US dollars. How realistic is to expect the rapid commencement of mining operations? What opportunities and risks might the new race for Afghanistan's resources bring? Martin Gerner reports

The alleged value of all the riches slumbering beneath Afghan soil would make Afghanistan one of the wealthiest countries on earth – on paper. Pictured: workers in a stone quarry in the Afghan province of Badakhshan

​​The sheer number one trillion – a one with twelve zeroes – prompts awe and rhapsodic reactions. But according to a study by the US Military and the US Geological Survey, this is the alleged value of all the riches slumbering beneath Afghan soil – supplies of iron, copper, cobalt, gemstones, gold and lithium – the latter essential for the production of mobile phone batteries, laptops and Blackberries. This would make Afghanistan one of the wealthiest countries on earth – on paper.

The international press is now touting what used to be Asia's poorhouse as the "Saudi Arabia of lithium", or as a "second Dubai". Even representatives from the Afghan government seem pleased at the sudden windfall and are talking about the best news they've heard in a long time.

Upon more sober scrutiny, however, it soon becomes evident that some virtually insurmountable hurdles stand in the way of the new Gold Rush. Experts see considerably more risks than opportunities involved in tapping these raw materials for future use.

"Most of the mineral deposits are very difficult to get at. And then the raw materials have to be processed," points out Ulrich Schwarz-Schampera, an expert at the German Federal Institute for Geosciences and Natural Resources. The ores could theoretically be smelted into metal on site in Afghanistan. But they will most likely be transported abroad instead. The problem is that Afghanistan has no railway lines or rapid routes to the open sea that would make this kind of transport realistic. 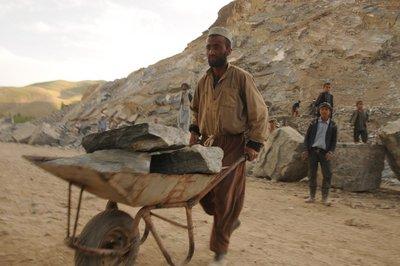 The news of Afghanistan's wealth of mineral resources is hardly anything new. The US estimates are based, among other things, on Soviet maps and data dating back to the 1970s

​​Stephanie Sanok from the Center for Strategic and International Studies likewise takes a critical view of the supposed discovery: "I don't know of one example where this type of raw material could be transported through or out of a country in the midst of an ongoing war," the security expert warns. "Afghanistan is not only lacking in infrastructure, roads, railway lines and water, but also in fundamental laws and mechanisms that would allow for corresponding investments."

Many of the mineral deposits are located in disputed territories where increasing Taliban activity is reported – for example in the province of Ghazni. Substantial lithium reserves have been discovered there, while in the provinces of Kandahar and Zabul large iron ore veins are evidently waiting to be tapped.

Another problem is property rights, which are utterly unclear. "Many of the sites where finds have been made are laid claim to by both tribes and the State," says Conrad Schetter from the Center for Development Research in Bonn. "Moreover, the Afghan government is regarded as extremely corrupt, whetting the appetites of the various factions even further."

Unclear property rights: Experts predict that big companies will split up the mining rights amongst themselves, while Afghanistan's population comes up empty-handed

​​And in fact, there are persistent rumours that when Afghanistan's minister of mines awarded mining rights to the Aynak copper lode in Logar, south of Kabul, two years ago, he sweetened the deal for the government by accepting a bribe of 30 million dollars.

His successor, Minister Wahidullah Shahrani, started out by promising more transparency for the conference of potential investors taking place this week in London. The main topic there will be the tender for mining rights to the Haji Gak mine in the province of Bamiyan, home of the world-famous Buddha statues. That area boasts one of the country's biggest iron ore deposits.

Experts from non-governmental organisations in the West are supposed to help the Afghan government conduct a transparent bidding process. Any suspicion of possible graft would damage the reputation of both the Karzai administration and the Western donor countries. Sample contracts for obtaining mining rights are hence to be made available on the ministry's website. Afghan parliamentarians and multipliers in civil society will in addition be permitted to review the contracts.

Greed versus the common good

The US report on Afghanistan's resources has developed a momentum that has prompted all sorts of speculations. Afghan media representatives for example calculated that the reserves were equivalent to virtual per-capita assets worth 34,482 US dollars for each of the 29 million Afghans. This figure could potentially prove to be more of a curse than a blessing, though. 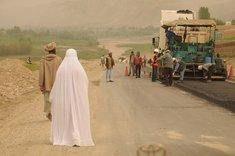 Trap of space: Afghanistan has no railway lines or rapid routes to the open sea that would make the transport of the raw materials realistic. Pictured: a road under construction in the Afghan province of Takhar

​​After all, with a neoliberal economic system in Afghanistan, specialists predict that big companies will split up the mining rights amongst themselves, while the population comes up empty-handed. "Conflict research in other resource-rich countries such as the Congo, Sierra Leone, Angola or Nigeria has shown that violent conflicts increase when new reserves are uncovered," notes Schetter.

The expert sees a possible way out of the dilemma in the example set by Norway, where funds were set up for natural gas and oil, with the requirement that the money be spent at a later date on social projects.

The news of Afghanistan's wealth of mineral resources is hardly anything new. The US estimates are based, among other things, on Soviet maps and data dating back to the 1970s. Students in Afghanistan have known for a long time about their country's resources and the difficulties involved in exploiting them. The mineral deposits are hence not exactly a secret; it's just that no one has made an explicit effort up to now to publicise their potential worth in the media.

The Obama administration's agenda is evidently to produce some good news from Afghanistan for a change, to show the home front that the deployment of troops there makes sense; this latest news item is hence aimed primarily at the US press. In fact, military operations in Helmand and Kandahar are stalled at the moment.

Critical observers by contrast believe that this would only give the enemy more ammunition: "The headlines could play right into extremists' hands," warns the former CIA man and Georgetown professor Paul Pillar, "and be used to spread the idea that the West is plundering the raw materials of the Muslim world."

Interview with Hikmet Çetin
Western Powers Don't Know Afghanistan
What are the main problems concerning the rebuilding of Afghanistan, what are the West's mistakes? And why are Afghan-Turkish relations so special? Hikmet Çetin, NATO Senior Civilian Representative in Afghanistan from 2004 to 2006 and former Turkish Minister of Foreign Affairs, speaks to Ayşe Karabat

A Journey to the Afghan Province of Nuristan
Hope and Skepticism in the Valley of Light
People in the West generally perceive eastern Afghanistan as a war zone. True, the terrain is hotly contested, both politically and militarily. But we hear very little about the progress made in these remote regions. Martin Gerner reports from the area

The Sudan
Oil-Cursed
Sudan's history seems to substantiate the theory that oil-rich countries fail to develop politically. In their thorough analysis, Elke Grawert and Atta El-Battahani look at how oil has become a political factor in Sudan and how it has marginalised the people in the country's south

The Geopolitical Significance of the Gulf Region
The World's Gas Station
In geopolitical terms, the Gulf region has increased in importance over the last few years. The decisive factor in that process has been the presence of large oil and gas reserves in the area as well as its ambivalent relationship with Iran. Christian Koch looks at the rise of the six monarchies which make up the Gulf Cooperation Council

END_OF_DOCUMENT_TOKEN_TO_BE_REPLACED
Social media
and networks
Subscribe to our
newsletter