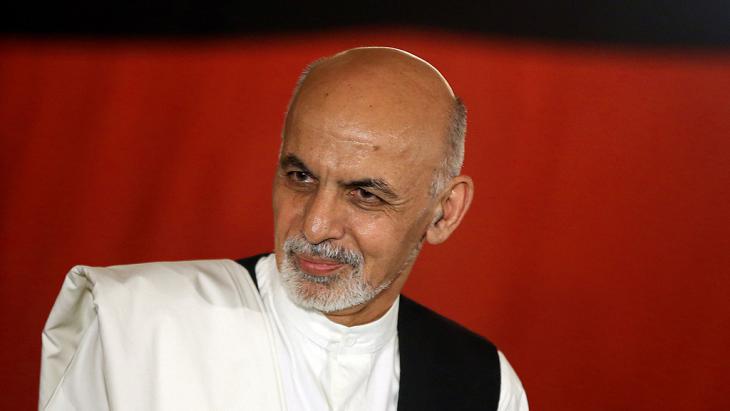 Afghanistan's new president: Ashraf Ghani
The intellectual and the warlords

Ashraf Ghani is Afghanistan's new president. The months of acrimonious dispute over the country's presidential election came to an end about a week ago. However, not much has changed: like his predecessor, Ghani is surrounded by violent warlords and drug barons. Emran Feroz has the details

Afghanistan is a land plagued by war. The trauma of the Soviet invasion and the civil war in the 1990s are etched into the Afghan collective memory. While the people were at war with one another and warlords ran the country, Ashraf Ghani was teaching at Berkeley and Johns Hopkins University. A lean Pashtun from the Ahmadzai clan, he moved to the United States in the 1970s, taking a PhD in cultural anthropology. Later, after the US intervention in Afghanistan began, Ghani turned his attention homewards.

He was appointed finance minister under Hamid Karzai, his experience of working for the World Bank in Washington in the late 1990s proving valuable. After that, Ghani spent several years as chancellor of Kabul University. This meant that he made a name for himself in both Afghanistan and the USA as an educated and far-sighted man, something that distinguishes him from many of his fellow Afghans. The renowned US magazine "Foreign Policy" listed Ashraf Ghani as one of its Top 100 Global Thinkers in 2010, cementing his good reputation.

Ghani made a first foray into politics at the 2009 presidential elections. His attempt to supersede Karzai quickly faltered, however. Ghani received only three per cent of votes, while Karzai won and prompted headlines with accusations of vote-fixing. Ghani repeated his attempt five years later, this time with greater success. Many voters pinned their hopes on him; unlike the other candidates, Ghani was still the same man, the intellectual whose hands had never been stained with blood.

Then he consolidated his political base by bringing the Uzbek warlord Abdul Rashid Dostum on board and declaring him his running mate for the post of vice-president. Ghani's Pashtun supporters in particular were shocked; the bloodthirsty Dostum and his militia had in the past made a name for themselves as slaughterers of Pashtuns. The idea of that Ghani – like so many other politicians before him – was now closing ranks with such dark figures dashed the hopes of many Afghan voters. 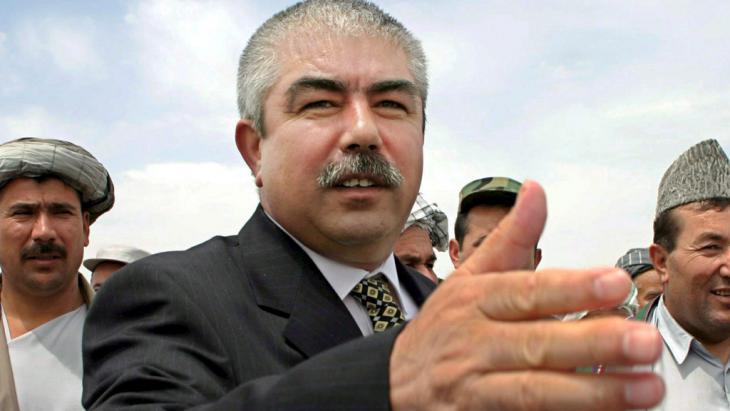 Uzbek warlord Abdul Rashid Dostum (pictured here) is accused of a number of crimes, in particular against Pashtuns. It came as a surprise to many that Ashraf Ghani, himself a Pashtun, who up until then was considered one of the only politicians without blood on his hands, chose Dostum as his running mate. The choice brought him votes from the Uzbek minority in the North

Nevertheless, voter turnout was high in April. People largely ignored the threats made by the Taliban, which claimed that the presidential election was an American farce. Many Afghans wanted a taste of the Western export known as "democracy" and proved enthusiastic. The West too, keen to enhance its image with a successful election before withdrawing its troops, declared itself satisfied. The façade of "we brought democracy to the Afghans" was successfully constructed, but did not last very long.

The first round of the election was something of a flop for Ashraf Ghani. His subsequent victory was far from predictable. Whereas Ghani reaped only 32 per cent of ballots, his opponent Abdullah Abdullah clocked up 45 per cent. A run-off ballot became unavoidable. One after the other, the remaining candidates – mainly infamous warlords who had played a role in the Karzai administration – joined either the Ghani or the Abdullah camp.

It was after the second ballot in June, from which Ghani emerged as a surprise victor with 56 per cent, that the real dilemma began. While Ghani declared himself the winner, Abdullah and his supporters refused to acknowledge the result. The accusations of electoral fraud coming from both camps grew louder and louder.

The dispute threatened to escalate, with the warlords fanning the flames on both sides. US Secretary of State John Kerry had to fly in twice to give Ghani and Abdullah a telling-off in person. Yet every time Kerry left, the argument began all over again. Jokes about a third visit from Kerry began to do the rounds. The Afghan presidential elections had become a comedy.

Then – a whole three months after the run-off election – a solution was suddenly found. A "government of national unity" was declared. Ghani and Abdullah made a show of brotherly embraces for the press. The former is to be president, while a new post – that of a kind of prime minister – will be created for the latter. The intention is to equip Abdullah with practically the same amount of power as Ghani. The Independent Election Commission (IEC) thereupon declared Ghani the winner of the presidential election. 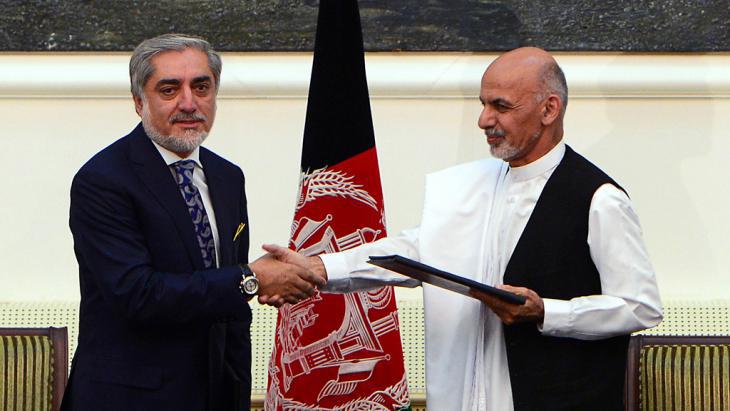 Following months of acrimony and mutual accusations, rival presidential candidates Abdullah Abdullah (left) and Ashraf Ghani shake hands at the signing of the agreements for the country's unity government in Kabul on 21 September 2014

Everything and nothing has changed

While the electorate has demonstrated its will for democracy, the country's political leadership has shown once again that it is not prepared to grant it. The so-called "government" will continue to consist of warlords, drug barons and other shady characters who already pulled strings during the Karzai era. It is they who have really won the election. Aid money will continue to flow into their pockets while their status remains untouched.

"Ironically, the Taliban, who demonised the elections from the outset, were right," says the Afghan journalist and political analyst Ahmad Waheed Mozhdah, adding "many Afghans don't even know what they voted for. Moreover, no one can say how long this fragile 'unity government' will survive. Outside influence was needed to bring it into being in the first place."

Just like his predecessor, Ashraf Ghani is likely to have little political room to manoeuvre. Without the support of the warlords, who consider their own interests above all else, he cannot make a single decision. In addition, the USA also wants to profit from Ghani. On the very first day after being sworn in, Afghanistan’s newly appointed national security adviser, Hanif Atmar signed a Bilateral Security Agreement with the USA, which was designed to regulate the future of the US troops in Afghanistan after 2014. Washington had been insisting on this agreement for months,

Among other things, the treaty extends the practice of impunity from punishment for NATO soldiers in Afghanistan. Ghani's signature means that the legal status of the heavily criticised night-time raids and searches, drone attacks, abductions of "suspected terrorists" and other crimes remains unchanged. Hamid Karzai had vehemently refused to sign the agreement. Ashraf Ghani announced in advance that it would be his first act in office.

In "Sparks Like Stars", Nadia Hashimi pulls the reader behind the curtain of modern history to peek backstage at the impact of war and terror on individual lives. Richard Marcus ... END_OF_DOCUMENT_TOKEN_TO_BE_REPLACED

In view of the catastrophic supply situation in Afghanistan, UN authorities are sounding the alarm. Inflation and growing poverty are exacerbating the situation. The Taliban ... END_OF_DOCUMENT_TOKEN_TO_BE_REPLACED

China to the east, Russia to the north, Afghanistan to the south: in this geopolitical environment, Kyrgyzstan, which has been independent since 1991, is attempting to make ... END_OF_DOCUMENT_TOKEN_TO_BE_REPLACED

The "War on Terror" has not only failed in Afghanistan, it has exacerbated insecurity and generated more terrorism. This is the main thrust of journalist Emran Feroz in his book, ... END_OF_DOCUMENT_TOKEN_TO_BE_REPLACED

As the Taliban shift their focus from insurgency to government, their most formidable rival is the Islamic State's regional chapter, which has staged a string of bloody attacks in ... END_OF_DOCUMENT_TOKEN_TO_BE_REPLACED

The Taliban’s victory over the United States in Afghanistan will not only greatly embolden their fellow jihadists, but also shake up the region’s geopolitics. An Afghanistan- ... END_OF_DOCUMENT_TOKEN_TO_BE_REPLACED
Author:
Emran Feroz
Date:
Mail:
Send via mail

END_OF_DOCUMENT_TOKEN_TO_BE_REPLACED
Social media
and networks
Subscribe to our
newsletter