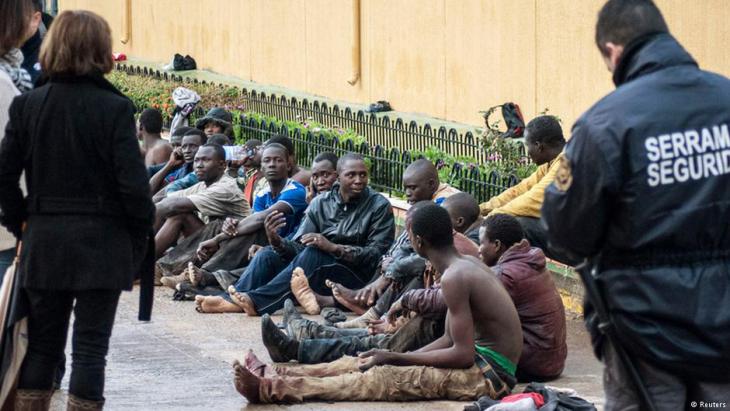 Most of the refugees arriving in Melilla, a Spanish exclave in Northern Africa, are Syrians, Yemenis and Algerians. Few of them hail from sub-Saharan Africa. Why is that? Santiago Saez reports from Melilla

"What asylum office? An asylum office in Beni Ansar? But that's impossible! We can't get near the border! That's for the Syrians," said one Guinean national, interviewed by the Andalusian Pro-Human Rights Association (APDHA) in their 2016 annual report.

He was living, like many other African migrants, in the forests of the Nador province, waiting for a chance to risk his life, climbing the fence, swimming around the harbour or hiding under a truck. Once inside the Spanish city, he would be able to apply to become a refugee.

In November 2014, Spain announced the opening of two Offices of Asylum and Refuge (OAR), one in each of its two autonomous cities in Northern Africa: Ceuta and Melilla. They were up and running before the end of the year, but the results weren't as expected. In Ceuta, the office is closed and unused. In Melilla, only Arabs and North Africans can access it.

The figures speak volumes. According to data from the Interior Ministry, around 1,000 people applied for refugee status in Melilla in the first five months of 2017. Of those, 882 did so at the border: all from Syria, Palestine, Yemen, Lebanon or the Maghreb region. The remaining 119 applied once inside the territory; among them were citizens from several countries in sub-Saharan Africa, including 45 Guineans. 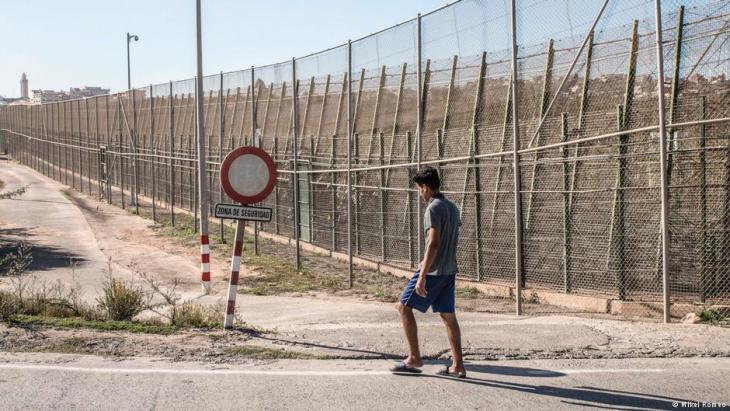 An impenetrable barrier: Melilla is encircled by a border that is seven metres high in places. The fences around both Ceuta and Melilla represent the only direct borders between Morocco and the European Union. African refugees regularly attempt to make it onto EU soil

The Melilla Office of Asylum and Refuge sits right next to the Spanish passport control. An asylum seeker coming from the Moroccan side would have to clear the border controlled by the North African country's police before having a chance to apply for asylum in Spain. But Moroccans don't let sub-Saharan Africans through. In two years, only a handful of sub-Saharan women, covered with veils and wearing heavy makeup, have made it through the border on foot, but there's no evidence that they applied for asylum.

"Here you have another. He's underage, but only for a couple more days," said the female police officer, handing a dog-eared blue passport to her colleague in the asylum office. The boy sat down in a small waiting room and soon was speaking in Arabic to a UNHCR staff member. The UN agency assists the Spanish police at the office, but doesn't manage it itself.

The boy's passport was Syrian but, most likely, it was not the one he used to cross the Moroccan border. "It's not as if the Moroccan police let the Syrians in, but they buy fake Moroccan passports from the mafia and because they look similar to the locals, they get to cross the border," says Helena Maleno, a Morocco-based journalist and human rights activist. A number of other human rights organisations, including APDHA and PRODEIN Melilla, have independently confirmed this practice.

"Melilla is like a mousetrap. Getting in is the easy part," says local attorney Leopoldo Bueno. The city is almost an expansion of the border itself. Migrants who are not kicked out and sent back to Morocco are allowed to roam free, while staying in the Centre for Temporary Lodging of Immigrants (CETI). However, getting out of the border town and into Europe is not an easy task, particularly for refugees. 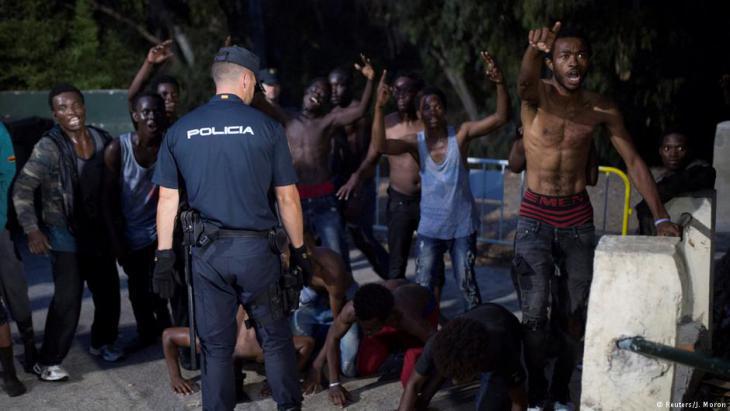 Spain′s habitual deportations across the Moroccan border are illegal. The practice was condemned in a judgement released by the European Court of Human Rights in October 2017. Two men, one from Mali, the other from the Ivory Coast, had brought a case against Spain. On 13 August 2014, they crossed from Morocco into the Spanish exclave of Melilla, subsequently travelling to mainland Spain. There they were arrested and sent straight back to Morocco by the Spanish police. In the process, no-one bothered to establish their identity, they were not asked why or what they were fleeing, nor were they given the opportunity to contact a lawyer, an interpreter or a doctor

When refugees apply for asylum in Melilla (at the border or later at the CETI), they get a temporary card identifying them as asylum seekers. This document allows them to stay in the city, although they are banned from working until their status has been resolved. But the card includes an ominous inscription: "Valid only in Melilla". There are dozens of cases of red-card carrying travellers being denied access to the ferry into Spain — a practice repeatedly denounced by the Spanish Commission for the Protection of Refugees (CEAR). Recently, the Madrid Supreme Court ruled that asylum seekers have the right to travel to the mainland.

Eventually, both asylum seekers and migrants get moved to Europe. However, the wait can be long. And sub-Saharan Africans feel that if they apply for asylum, it can take months or even years before that happens. For Leopoldo Bueno, this is one of the many examples of misinformation swirling around the migrant community. "They hear the stories that they won't get out of Melilla if they apply for asylum, so many who could do it decide not to. But they do get out eventually. It's just that it's a long process."

However, according to Isabel Torrente, from Melilla Acoge, a local organisation that helps migrants overcome administrative, legal and linguistic hurdles, there's some truth to the idea that certain nationalities are processed more swiftly. "It's true that they eventually get moved to the Iberian peninsula, but who comes and who goes isn't clear." Do Syrians usually get out of Melilla faster? "Yes, they usually do," she says.

Jose Palazon of the PRODEIN Melilla NGO thinks it's a clear case of institutional racism. "They don't want Africans as refugees. They don't fit the narrative. Only Syrians do, so they win in a loser's game," says the activist.

The façade of a twelfth-century cathedral is an unlikely place to find a message in Arabic script carved in stone, but so it is in the Portuguese city of Coimbra. Marta Vidal ... END_OF_DOCUMENT_TOKEN_TO_BE_REPLACED

The country's national election on 8 September will likely bring new government. But neither experts nor locals expect it to bring long-promised change, writes Cathrin Schaer END_OF_DOCUMENT_TOKEN_TO_BE_REPLACED

The coronavirus pandemic has turned lives upside down all over the world. In the Middle Ages, however, people lived with epidemics all the time. The best and most famous ... END_OF_DOCUMENT_TOKEN_TO_BE_REPLACED

A bird's eye view of eight hundred years of history: Brian A. Catlos tells the story of Al-Andalus in the style of a streaming series and deconstructs the myths of the Reconquista ... END_OF_DOCUMENT_TOKEN_TO_BE_REPLACED

In his new book, "Tangier/Gibraltar- A Tale of one city: An Ethnography", Dieter Haller looks at how shared experiences and practices have created a unique relationship and a ... END_OF_DOCUMENT_TOKEN_TO_BE_REPLACED

While Europe and North America experience something like a return to normality with relatively high vaccination provision and take-up rates, the rest of the world is struggling to ... END_OF_DOCUMENT_TOKEN_TO_BE_REPLACED
Author:
Santiago Sáez
Date:
Mail:
Send via mail

END_OF_DOCUMENT_TOKEN_TO_BE_REPLACED
Social media
and networks
Subscribe to our
newsletter