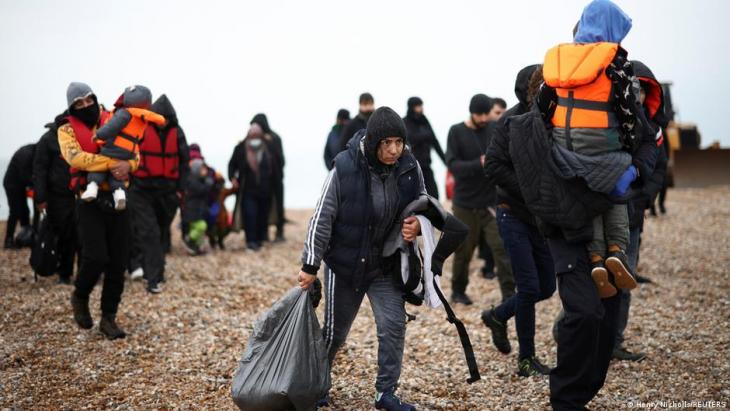 The last time 20-year-old Mohamed spoke with his father, who lives in Iraqi Kurdistan, he told him that he was about to cross the English Channel. That was on 23 November. The next day, France announced the sinking of a boat in the busy waterway, killing at least 27 people, in a disaster that has made global headlines. The family now fears the very worst.

"Our last contact was on the eve of the tragedy," says the father, Qader Abdallah, 49, sitting in his living room in Qadrawa, a small village in Kurdistan, northern Iraq. "We told him it was dangerous, that there were risks with this crossing. He tried to reassure us by telling us there had been many crossings... and that there had been no problems."

Since then, several families in Qadrawa have desperately waited for news on their family members. Were they onboard the ill-fated boat? Did they arrive in Britain?

It is difficult to know, as the investigation is yet to reveal the identities of the recovered victims, their nationalities or the cause of the capsize.

Immigration ministers from France, Belgium, Germany and the Netherlands met in the French port of Calais on Sunday and promised to strengthen "operational cooperation" on tackling people-smugglers.

France said EU border agency Frontex would deploy a plane to help fight migrant trafficking in the Channel from 1 December.

Mohamed flew to Turkey a month ago from the Kurdish region's Arbil airport. He made his way illegally to Italy, then to France. He wanted to join his two brothers, who have been living in Britain for two years.

"Our family had agreed that he should go to Europe," Abdallah admitted. "All young people try to go to Europe to find a better future."

In the autonomous region of Kurdistan, he said, "living conditions are difficult".

"The young people have demonstrated because of the deteriorating economic situation that prevents them from finding a job," he said about recent protests by university students.

Last Wednesday's tragedy was the worst to date in the English Channel, which is now crossed daily by migrants trying to reach the English coast, usually in flimsy boats. The crossings have multiplied since 2018 following restrictions at the port of Calais and in the Eurotunnel, which irregular migrants had traversed by hiding in vehicles.

Another father in the Kurdish region, Abu Zaniar, said he too had lost track of his 20-year-old son. "On 23 November we spoke, but since then there has been no information on his fate," he said.

A month ago, the young man had left by plane for Turkey, from where he was able to travel illegally to Italy, then France.

"We made an agreement with a smuggler to take him to Britain in exchange for $3,300," the father said.

During the interview, the father tried once again to reach the smuggler by phone, but to no avail. The phone was turned off.

The father then called the traffickers' relatives, telling them: "He had promised us to get Zaniar safely to England."

'I will send him back'

"If my son survived this time, I will send him back to Europe," said Abu Zaniar. "No life is possible in the Kurdistan region, graduates here can't find work."

Two years ago, his son had tried to reach Western Europe via Bulgaria, where he was arrested, mistreated in prison, and then deported to Iraq.

According to rescuers, those shipwrecked in the Channel were crammed into a soft-bottomed inflatable boat about 10 metres long. Only one Iraqi and one Somali were saved.

Could the Iraqi be a man named Mohamed Khaled? His mother, Cheleir Ahmed, thinks so, saying she has received a phone call from her son.

The 22-year-old had gone to Belarus two months ago, before reaching France with the help of smugglers.

"His health is very bad because he stayed in the water for a long time," his mother said.

"He informed me that he and an African migrant had survived."

She said her son told her there had been 32 people on the boat, including children and entire families, almost all of whom would have drowned.    (AFP)

END_OF_DOCUMENT_TOKEN_TO_BE_REPLACED
Social media
and networks
Subscribe to our
newsletter