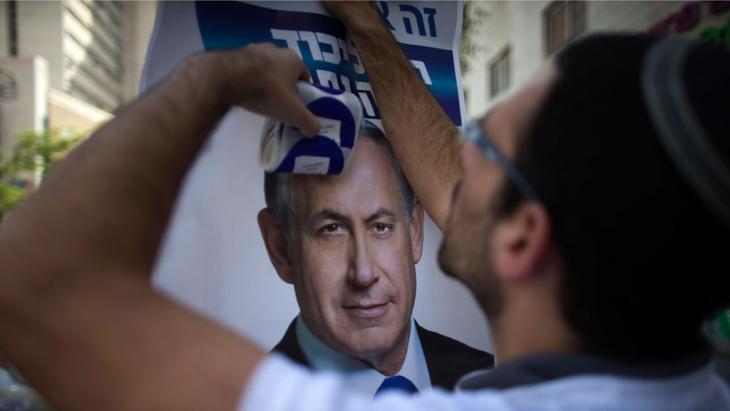 After the election in Israel
Palestine's hope in Netanyahu

While many in Israel were hoping for Netanyahu's electoral defeat, Palestinians were more reserved. They now expect the international community to exert more pressure on Israel. René Wildangel reports.

"Let's just hope that Netanyahu wins the election," said a young Palestinian intellectual as he bid me farewell on the day of the Israeli election, before the final results had been announced.

Even after it became clear that Benjamin Netanyahu had won, many Palestinians seemed unperturbed by the result. This response should not be understood as fatalism. On the contrary, it reflects a sober analysis of the political balance of power both within and outside of Israel, as well as the prospects for Palestinians to finally make political progress on the path to attaining statehood instead of continuing with a failed peace process.

In an article for the New York Times, Yousef Mounayer wrote, "Mr. Netanyahu's victory is actually the best plausible outcome for those seeking to end Israel's occupation. Indeed, I, as a Palestinian, breathed a sigh of relief when it became clear that his Likud Party had won the largest number of seats in the Knesset."

During the run-up to the election, many observers, particularly in Israel, harboured hopes that Netanyahu's rule was coming to an end. The Palestinians were considerably more restrained in their expectations. Even in the case of Netanyahu's electoral defeat and the formation of a new government under his rivals Isaac Herzog and Tzipi Livni (from the Zionist Camp), they did not await any changes with respect to the occupation of Palestinian territories or Israeli-Palestinian relations. 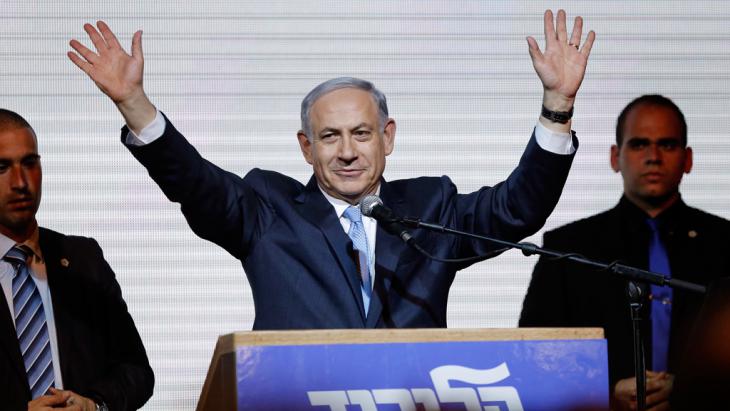 Election victor and tactician Netanyahu: Four days before the parliamentary poll it looked as though Netanyahu would certainly lose the race. Opinion polls put the centre-left "Zionist Union" movement four seats ahead. One day before the election, Netanyahu declared that if he were to remain in power, there would be no Palestinian state. He also announced the construction of further settlements on Israeli occupied territory and an unyielding stance towards the enemies of Israel. Supporters of the settlers' party "The Jewish Home" and the ultra-nationalist "Israel is Our Home" switched their votes to the Likud bloc as a result.

In the first place, Herzog would have had to rely on a coalition with parties from the centre or the right, such as "Kulanu" or "Yesh Atid," that most certainly would have rejected the division of Jerusalem, as demanded by the international community, and the recognition of the 1967 borders as the basis for negotiations. Secondly, during the election campaign, the "Zionist camp" did not develop any vision as to what concrete policies it would adopt with respect to the Palestinians or how it would end the occupation.

In fact, the occupation was not among the central issues of the Israeli election campaign at all. Those parties holding a clear position on ending the occupation were either very weak, such as the left-wing "Meretz" (only 5 seats in the new Knesset) or, like the "Joint List" of Arab parties, outside the spectrum of Jewish parties, which, for the most part, were not interested in cooperation with the new alliance.

As such, the main concern was that a moderate government would simply display a friendlier face and declare itself prepared to engage in new peace talks, yet still not be willing to give up the present settlement policy or recognize international law as the basis for negotiations.

This had already been the strategy of the previous Netanyahu government in the latest round of negotiations in 2013/14 mediated by American Secretary of State John Kerry. The Israeli government was not prepared to make a single concession, and at the same time even accelerated the expansion of settlements. It is now generally accepted that the 1993 Oslo process, which was initially set to run for five years, has ultimately failed. In the 22 years of deadlocked negotiations, the number of Israeli settlers in the West Bank has tripled. 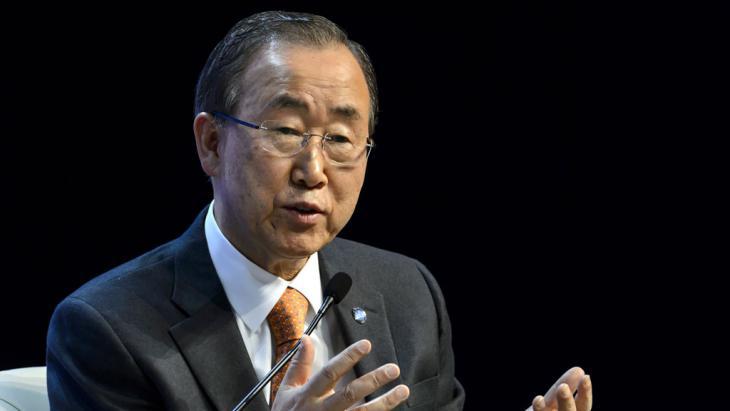 Appeal for fundamental political change in Israel: UN Secretary General has urged Israeli Prime Minister Benjamin Netanyahu to renew his commitment to the two-state solution in the Middle East conflict. Speaking recently in New York, Ban said the foundation of a Palestinian state is "the only way" to resolve the conflict. The Secretary General also urged the Prime Minister to release tax revenue currently held by Israel but owed to the Palestinian Authority.

Clear signals from the EU?

Yet, that is precisely what Netanyahu refuses to do. Shortly before the election, he stated that there would be no Palestinian state under his leadership. This was not, in fact, the first time he expressed such a position. After all, Netanyahu began his political career in the 1990s as a radical opponent of Rabin's peace policies. In this light, his interim acceptance of a two-state solution could be seen as mere lip service. Already in the summer of 2014, he announced his rejection of a Palestinian state at a news conference.

Other members of his government have also frequently made clear that they wanted to maintain the occupation, quite apart from the utterances of the government's right-wing economics minister Naftali Bennet, who openly supports the annexation of further territories on the West Bank.

Never before, however, has Netanyahu's stance against the two-state solution been so prominently highlighted in the press. President Obama said in an interview with the "Huffington Post" Internet news platform that he would "take Netanyahu at his word and examine new options." During the election campaign, Netanyahu also committed himself to the continuation of the settlement policy and even made racist comments about Palestinian citizens of Israel. 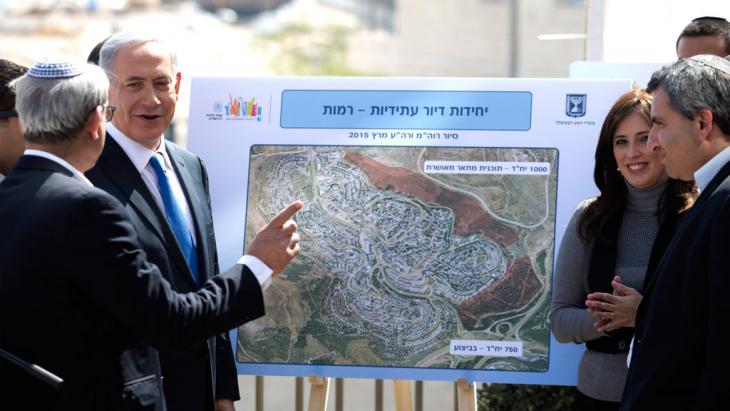 Israel faces international criticism due to its settlement policy, which is regarded as one of the greatest hurdles on the path to peace in the Middle East. The Palestinian Liberation Organization (PLO) accuses the Israeli government of having committed "war crimes." The conflict over settlements should be addressed by the International Criminal Court, stated PLO spokesman Wassel Abu Jussef.

In a video on his Facebook page, he claimed that the Israeli left was "bussing the Arabs to the polls in droves." This also earned him a great deal of criticism, also from a White House spokesman. Such positions and statements certainly offer nothing for Palestinians to rejoice about. Yet, as a result of the clarity of Netanyahu's latest pronouncements, Palestinians hope for increased political pressure on Israel and concrete progress towards an end to the occupation.

It now might be possible to push forward with procedures on the international level that had previously been blocked. A UN resolution, which includes internationally approved policies towards achieving a peaceful solution, all rejected by Israel, and which holds out the prospect for an end to the occupation, was vetoed by the USA just a few months ago. This position could change, especially seeing as how Netanyahu irritated the Obama administration during the election campaign by accepting an invitation to speak before the US congress arranged by the Republicans. Accordingly, Netanyahu only received congratulations on his re-election from the USA after a considerable delay.

Although EU High Representative for Foreign Affairs Federica Mogherini did congratulate Netanyahu and diplomatically expressed her hope for new peace negotiations, the EU as a whole will have to consider how to deal with the new right-wing government.

A new internal report on Jerusalem paints a dramatic picture resulting from Israeli settlement policies, the destruction of houses, and the provocations on the Temple Mount. It therefore recommends more effective measures against the settlement policies. The Palestinians also expect that a right-wing government under Netanyahu will face pressure from the European Union via clear signals and measures that go far beyond what has been offered in discussions until now.

Not only Palestinians, but many Israelis and international NGOs and human rights organizations, as well, hope that the response to the new right-wing government under Netanyahu will not be simply "business as usual," but that during this new term the government will be held to account for the consequences of its right-wing policies, the massive expansion of settlements, and the rejection of international principles of law. 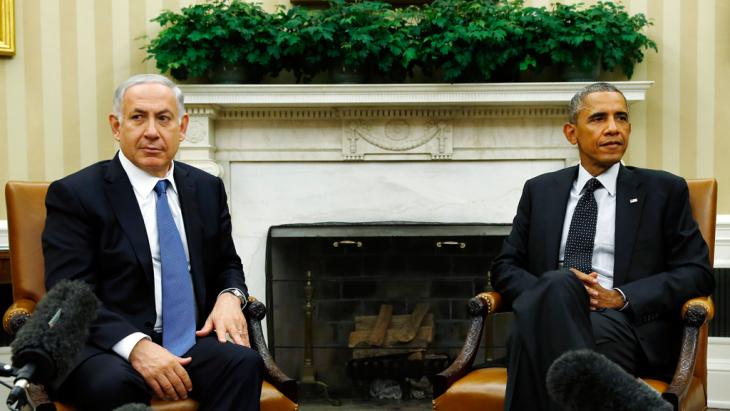 A deep crisis of confidence: Israeli Prime Minister Benjamin Netanyahu is facing the most difficult crisis with the White House that he has ever experienced during his many years in government. The tactical manoeuvre taken by the conservative prime minister last week to secure his re-election has also resulted in definitively alienating himself from President Obama and his staff. Netanyahu's subsequent attempts to backtrack have been seen as dishonest by Washington.

Peter Beinhart has written in the Israeli newspaper Haaretz that there is now a "pressure process" instead of the previous, unsuccessful "peace process." International pressure will be necessary in order to prevent a new and fatal war against Gaza and to make reconstruction and an end to the blockade possible.

Palestinian President Abbas has made clear that he is prepared to negotiate with the "next Israeli prime minister," but only if he recognizes a two-state solution. Yet, even though Netanyahu has already attempted to distance himself from the statements he made during the campaign on the two-state solution, hardly anyone is prepared to believe he is ready to engage in serious negotiations.

International support could, in fact, increase, and not only for an investigation into the recent war in Gaza, but also into the decades of settlement and occupation of Palestinian territories. On 1 April, possibly even before the formation of a new government in Israel, Palestinian membership in the court will become legally binding. This is a symbol of just how the Palestinians could conceivably adopt a more confrontational stance towards a new Netanyahu government. And they are seeking international support for this new approach.

The recognition of a Palestinian state could also gain new momentum. In October 2014, the Swedish government officially recognized the state of Palestine. A number of national parliaments followed with similar declarations. After the re-election of Netanyahu, British Deputy Prime Minister Nick Clegg announced that his country could also follow the example of the Swedish government should the Israeli prime minister maintain his rejectionist position on a two-state solution. The British Parliament had already passed a non-binding resolution in October 2014 recognizing Palestine. Even in Germany, which has invested huge sums over the years in building up Palestinian state structures, it is expected that the government and the Bundestag will engage in serious debate on this issue.

Although it is difficult to rejoice in the re-election of Netanyahu, this state of affairs has led to hope among Palestinians that they will finally achieve more support for policies aiming to implement international law and to achieve an end to Israeli occupation.

A leading light of Israeli theatre, Ofir Henig has directed the Israel Festival and is the only female director to have been awarded the Israel Theatre Prize. These days, however ... END_OF_DOCUMENT_TOKEN_TO_BE_REPLACED

With the current leadership of Iran quick to lay the blame for the Iran protests on Israel, the chances of harmonious relations between the two countries still seems remote. Yet, ... END_OF_DOCUMENT_TOKEN_TO_BE_REPLACED

Daniel Barenboim is not only a world-famous pianist and conductor. He has also worked tirelessly to foster understanding and reconciliation between Palestinians and Israelis. By ... END_OF_DOCUMENT_TOKEN_TO_BE_REPLACED

After a two-year hiatus, the Arab League re-convened at the beginning of November in Algiers against a backdrop of uncertainty and discord. By Pierre Boussel END_OF_DOCUMENT_TOKEN_TO_BE_REPLACED

On 1 November, elections are set to take place in Israel for the fifth time in four years. If Arab minority voters decide to stay home out of frustration at their divided parties ... END_OF_DOCUMENT_TOKEN_TO_BE_REPLACED
Author:
René Wildangel
Date:
Mail:
Send via mail

END_OF_DOCUMENT_TOKEN_TO_BE_REPLACED
Social media
and networks
Subscribe to our
newsletter