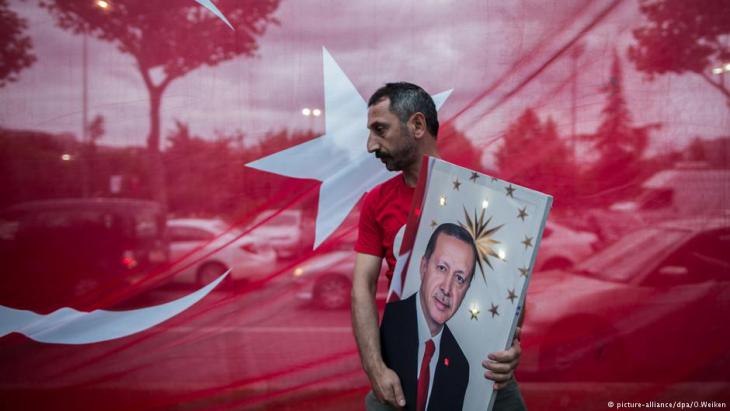 After the elections in Turkey

There may be trouble ahead

With his election victory, Recep Tayyip Erdogan has secured power for years to come. Despite an energetic campaign, the opposition did not manage to break the Turkish patriarch’s power or even increase its share of the vote. Society seems to have become entrenched in its various camps and there is a risk that tensions will escalate further. Ulrich von Schwerin reports from Istanbul

Erdogan promised a new Turkey after the elections but, following his victory, it may be feared that this new Turkey will look depressingly similar to the old one. This is a country where students are locked up for protesting against the government’s war policy. A country where academics are sacked for calling for a peaceful solution to the Kurdish conflict. A country where journalists who write articles about the suspicious wealth of the ruling family risk being sent to prison, where thousands of others have already gone on vague charges of terrorism that seem unconvincing even to their accusers.

It is a country in which the media almost always toes the government line and there are hardly any journalists remaining who will dare contradict the president when he blames a conspiracy of foreign powers for the drop in the Turkish currency. All the media are so intimidated that they even declined to comment when the head of state first categorically ruled out fresh elections and shortly afterwards announced them. Or when Erdogan, who spent years proclaiming coalitions to be the fundamental evil of politics, suddenly began considering them shortly before the election.

Before the election it looked as though, for the first time, the opposition might pose a serious threat to Turkey’s long-serving ruler. In Muharrem Ince, the former governing party – the CHP – had a candidate who could hold his own in the arena against Erdogan, the people’s tribune. With his shirt-sleeves manner, his colloquial turn of phrase and his energetic speeches, Ince sparked enthusiasm in the masses and drew millions of people to the final stages of his highly-organised election campaign tour in Izmir, Ankara and Istanbul.

But there was nothing to be seen of his huge final rally in Istanbul on state television. While Erdogan’s every appearance was broadcast in its entirety, the television channels for the most part only showed snippets of Ince, while the nationalist Meral Aksener was almost completely ignored. Selahattin Demirtas may have been permitted to stand for election, but he was unable to appear in public, having been in prison since November 2016, accused of membership of the PKK. Hundreds of other HDP politicians also remain in jail. 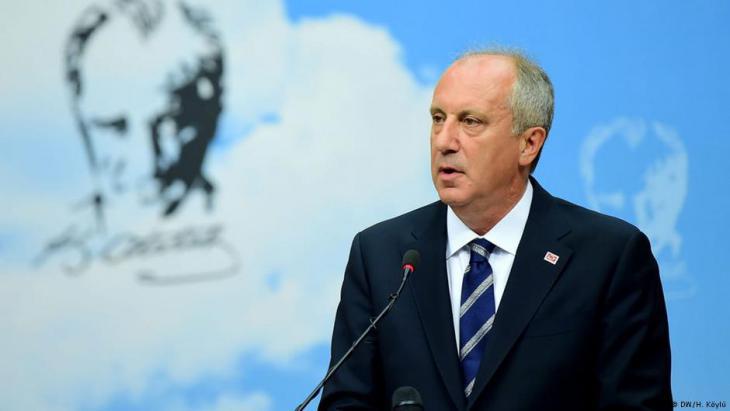 Opposition draws the short straw: Muharrem Ince, the candidate of the main opposition party CHP described the presidential and parliamentary elections held on 24 June as unfair. The generally pro-Erdogan media documented every detail of the incumbentʹs campaign. Ince and other opposition candidates were given far less coverage. The pro-Kurdish HDPʹs presidential candidate, Selahattin Demirtas, was forced to conduct his campaign from prison. Erdogan on the other hand proclaimed the electoral process a celebration of democracy

The election took place under the state of emergency that was declared following the failed military coup in July 2016, meaning that during the campaign important basic rights such as freedom of assembly were restricted. Not long before the elections, the government also passed a new voting law that allowed them to relocate polling stations for security reasons. HDP strongholds were particularly badly affected. The ruling AKP shamelessly used every means at the state’s disposal to support their election campaign – for Erdogan, party, government and state have long been one and the same.


The election campaign, then, was certainly not fought under fair conditions, but the enthusiastic CHP and HDP rallies made it look as though a change might be possible. Now, these great hopes have given way to great disillusionment: in the end, Erdogan won the presidential election by a clear margin in the first round and also secured a new majority for himself in parliament. The HDP may have regained a place in the National Assembly, but the opposition hardly improved their position at all. The percentages remain almost the same and Turkish society seems to have become entrenched in its various camps.

One-man regime in the offing

With his electoral victory, Erdogan has secured his power for years to come, particularly now that the presidential system has come into force, having been approved by a narrow margin in a controversial referendum in April 2017. There is little reason to assume that Erdogan will not use his new authority to continue his repressive programme. The opposition is warning that Turkey threatens to finally become a one-man regime – helpless against the despotism of an old man resistant to advice, who at best now only trusts his own family. 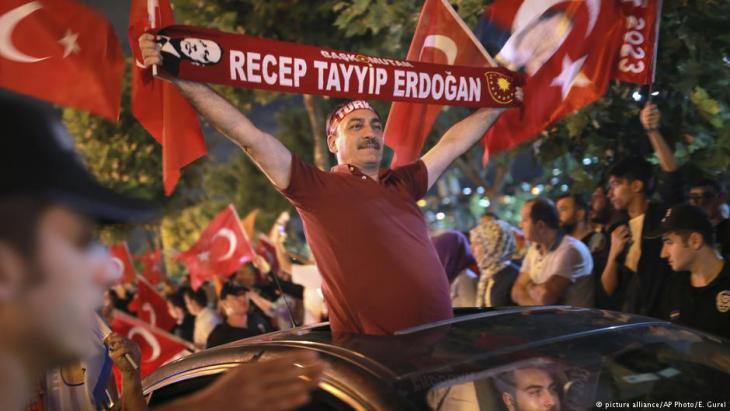 Erdogan euphoria not without reason: Turkey is not a dictatorship and nor can all AKP supporters be classed as enemies of democracy. Many conservative Muslims vote for the AKP because it has brought them respect and prosperity after years of being disregarded by the secular, elite CHP. They haven’t forgotten the Kemalist elites forbidding their daughters from entering higher education because they wore the hijab

Turkey really does seem to be on its way to becoming one of those autocracies like Azerbaijan, Uzbekistan or Belarus, which congratulated Erdogan on the evening of the election even before all the votes had been counted. But Turkey is not yet a dictatorship. Despite its many shortcomings, the election campaign showed how lively political competition still is in Turkey. And even if on election day, there were numerous reports of irregularities in the Kurdish south-east, there is still no reason to cast serious doubt on the election result.


Policies of the Kemalist elite yet to be forgotten

Turkey is not a dictatorship and nor can all AKP supporters be classed as enemies of democracy. Many conservative Muslims vote for the AKP because it has brought them respect and prosperity after years of being disregarded by the secular, elite CHP. They haven’t forgotten the Kemalist elites forbidding their daughters from entering higher education because they wore the hijab. Nor have they forgotten how poor and underdeveloped some parts of Anatolia were before the AKP came to power.

In the election campaign, Erdogan sounded like a proud property developer as he listed all the bridges, tunnels and airports his government has built since 2002 and spoke in rapturous tones about the opera house, the public park and the huge canal that would be constructed in Istanbul following his re-election. For his supporters, these grand projects represent an improvement in quality of life and a tangible sign of progress and new strength for a country that has now entered the premier league in areas such as aviation.

This increased prosperity, however, hardly outweighs the restrictions on citizens’ rights, the erosion of democracy and the persecution of the opposition that the country has seen recently. Above all, however, it must be clear that no long-term development is possible without legal certainty in the country and without the justice system, the press and the opposition being able to denounce abuses, suggest correctives and penalise violations of the law. If the AKP supporters don’t want to risk their prosperity, they will have to see to this themselves.

The USA and NATO plan to withdraw from Afghanistan by September. The operation is risky, the outcome uncertain. Many Afghans fear civil war. The quake on the Hindu Kush will also ... END_OF_DOCUMENT_TOKEN_TO_BE_REPLACED

The neo-Ottomanism propagated by Erdogan has long been more than rhetoric and symbolic politics. This can be seen from recent developments in parts of northern Syria, where Turkey ... END_OF_DOCUMENT_TOKEN_TO_BE_REPLACED

Televised Turkish dramas are all the rage in the Middle East. A young Ottoman TV Empire has been expanding its soft power by harnessing regional dialects, Arabic names and viewers ... END_OF_DOCUMENT_TOKEN_TO_BE_REPLACED

Researchers agree that climate change alone cannot be blamed for the outbreak of war in Syria in 2011. However, neither can it be ignored as a reason this once blossoming country ... END_OF_DOCUMENT_TOKEN_TO_BE_REPLACED

The Sufi Trail is a long-distance hiking route from Istanbul to Konya that seeks to revive the ancient tracks used by foot pilgrims on their way to Mecca. Marian Brehmer spoke to ... END_OF_DOCUMENT_TOKEN_TO_BE_REPLACED
Author:
Ulrich von Schwerin
Date:
Mail:
Send via mail

END_OF_DOCUMENT_TOKEN_TO_BE_REPLACED
Social media
and networks
Subscribe to our
newsletter