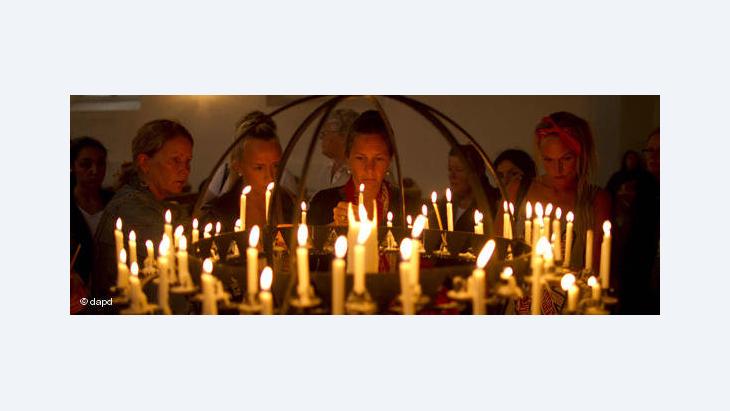 After the Massacre in Norway

Critics of Islam Face a Dilemma

The massacre in Norway reveals just how wrong critics of Islam have been: it wasn't a Muslim who went to war against the West – it was one of their own, someone who shared many of their views. That has made it clear: the true enemies of the anti-Islam movement are not the Muslims, but its own supporters. By Stefan Weidner

If it weren't linked to such a terrible event, one could see it as an irony of history: the critics of Islam are suddenly being forced to justify themselves just as they have been trying to force Muslims. After the Norwegian mass murderer Anders Breivig referred so unambiguously to their view of the world as the justification for his actions, critics of Islam are having to demand that others make the same distinction between radical and moderate – between those who espouse violence and those who engage in intellectual discussion – which they have always refused to allow in the case of their enemy, the allegedly monolithic Islam.

But those who have so far justifiably attacked the Islam critics for their failure to differentiate in their approach to the religion and its adherents would now be well advised not to refuse them the same right – even if they are engaged in loud denials of responsibility and even if they refuse to rethink their own position and their own relationship to radical tendencies.

In other words, it doesn't matter what critics of Islam themselves say on the matter, we have to admit it: they didn't intend this – not even their most crackpot representatives. But then, what did they want? Perhaps Breivik's actions can provide us with a clue.

Clear-headed observers have often noted that there are certain similarities between Islamist fundamentalists and their ideological opponents in the European anti-Islam movement. 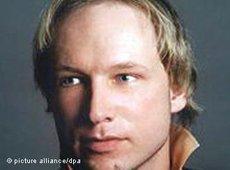 Hatred against Islam and paranoid fear of an Islamic subversion of Europe did not lead Breivik to declare war on the Muslims, says Weidner. They led him to carry out a brutal strike against his own society

​​At the same time, no-one will have expected that the anti-Islam movement would have brought forth a similar kind of operation, with a similar level of brutalisation, as the Islamists have so often undertaken.

It was also unexpected that, when someone did decide to imitate the level of violence, he did not choose to imitate the actual operations carried out in New York, Madrid or London.

Had it been Breivig's aim to mirror those operations, or to take revenge for them, he might have taken his bomb to the government quarter in Riyadh, or set fire to Scandinavian refugee hostels, or, like the Malmö sniper of 2010, hunted down black people.

Islamist terror is not mainly directed against the West

Such actions, however terrible they would have been, would not have shocked us to anything like the same extent as Breivik's actions did. And the events would have as little effect on the critics of Islam as they the killing of a Muslim woman in a Dresden courtroom in July 2009.

That was carried out by a man whose motives were just as anti-Islamic and right-wing extremist as Breivik's. But, astonishingly, there were no calls for a rethink of anti-Islamic positions back then – perhaps because the victim wasn't one of "us."

What has so disturbed us about the massacre in Norway, and what has proved so embarrassing for critics of Islam, is that the attacker – and he was probably himself scarcely aware of it – didn't take as his model the Islamist terrorists who attacked the West; he followed the example of the Muslims who attack other Muslims.

In the perfection of its planning and operation, Breivik's act can be compared to that of Mohammed Atta on 11th September 2001. But in its choice of target, it is more like that of the many hundreds of nameless attackers who blow themselves up in the markets of Peshawar, Kabul or Baghdad, and take as many of their fellow-believers (and fellow-sufferers) as they can with them.

Critics of Islam have always been blind towards the fact that Islamist terror has not been primarily directed against the West, but against those who have different opinions within their own world, among the Muslims. Attacks there are daily occurrences, whereas they are still the rare exception here – and not just because of our watchful security services, but mainly because the real front in the war does not in fact run where the Islam critics think it does. The front is not here.

We are the "others"

"The War in Our Cities" is the title of a book which was published in Germany 2003 and which is typical of the paranoid end of Islam criticism. The author, Udo Ulfkotte, calls for the ramping up of the German GSG9 and other anti-terror police units, to help us protect ourselves from the attacks he expects to be carried out by Muslims from within our own societies.

But now we can see that it was actually someone with Ulfkotte's world-view who wanted to start "the war in our cities". If you look at Ulfkotte's call to ramp up of the anti-terror units in hindsight, it is almost as if he wanted to protect us against the radicalisation of his own ideas. 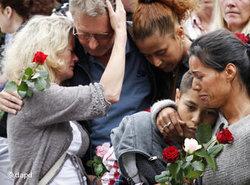 Deepest sympathy: more than one week after the Norway attacks, the country is still in deep mourning

​​Hatred against Islam and paranoid fear of an Islamic subversion of Europe did not lead Breivik to declare war on the Muslims (even if though there were Muslim immigrants and their children among the victims). They led him to carry out a brutal strike against his own society. Against this background, the real trauma for the critics of Islam is not that Breivik quoted their ideas and used them to justify his "licence to kill"; it is that his act reveals the real target of the movement, which is their own society as it really is: Europe, the West.

July 22nd, 2011, has shown that the main effect of the anti-Islam movement so far has not been to force Islam back, but that the society for which the critics of Islam claim to speak – which they claim to want to protect and strengthen – has been split. The "other" – we now learn – is actually "us". The anti-Islam movement has not successfully encouraged hatred against Islam, but hatred against the Europe of today, against those citizens who have so far failed to succumb to the movement's arguments.

No-one, not even the most convinced critics of the anti-Islam movement, could have guessed the extent of this self-harming potential. On the contrary, we have allowed ourselves to be led astray by the rhetoric of the anti-Islam movement, and even by the term "criticism of Islam". In reality, Islam is merely the (somewhat overloaded) vehicle, by means of which society itself can be subjected to criticism. The critics of Islam criticise Islam, but they're aiming at their own society, because it hasn't turned out the way they'd like. 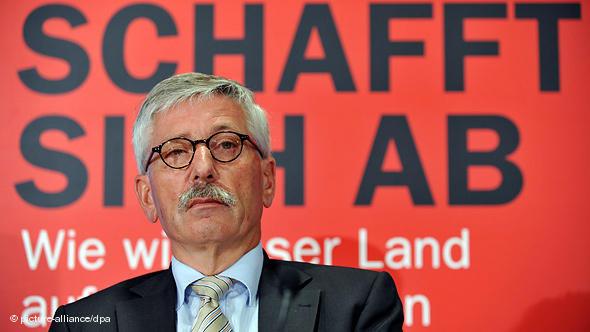 Thilo Sarrazin, a former director of the Bundesbank and former finance minister in the city-state of Berlin, annoyed many people – and not just immigrants – with his book "Germany Does Away with Itself" and with statements about the inherited stupidity of immigrants

Thilo Sarrazin's book "Deutschland schafft sich ab" ("Germany Does Away with Itself") was a perfect example: it offered helpful, when not always welcome criticism of various aspects of German life, such as a social system which cannot be funded, a collapse in values, failures of the education system, and so on.

But it turned it into a fruitless and unpleasant discussion about Islam, and thus in the end undermined itself. Sarrazin was a good government official, who did good work, and who certainly would have had something useful to say to us, but he let himself run into the trap into which critics of Islam always run when they claim that the real problem is not "us" but "them".

Against this background, it seems naive to say that the main fault of Islam criticism is its distorted and ignorant picture of Islam, which is often based on racist stereotypes. In doing that, one is merely swallowing the anti-Islamists' bait.

It would be better to insist that the Islam critics tell us what their ideal actually is for their own society. The closer one looks, the clearer it becomes: behind the common enemy Islam, there are hidden often highly contradictory social visions. The critics agree on their rejection of current conditions, but they differ widely on their aims.

If one wants to take a differentiated approach to the anti-Islam movement (as one must after July 22nd), one needs to get rid of the word "Islam", and ask its adherents as they then stand naked before us: What do you really want? It will then be easier to divide the sheep from the goats, to distinguish between what is worthy of discussion and what is not.

The author is a specialist on Islam, a writer and translator, and editor of the Arabic journal "Fikrun wa Fann" (Art and Thought) published by the Goethe Institute. His book "Aufbruch in die Vernunft. Islamdebatten und Islamische Welt zwischen 9/11 und den arabischen Revolutionen" ("The dawn of reason: debates about Islam and the Islamic world from 9/11 to the Arab revolutions") will shortly be published by Dietz publishers in Germany.

Home
Print
Newsletter
More on this topic
Aftermath of the Attacks in Norway: Isolate the Intellectual Incendiaries!Islam Criticism in Germany: The Uprising of the Indecent
Related Topics
Integration in Germany, Islam and the West, Islam in Europe, Islamophobia, Migration in Germany, Muslims in the West
All Topics

EU parliamentarian Dietmar Koester criticises the Union's failure to speak up when faced with human rights abuses committed by its Middle Eastern allies, while pointing out that ... END_OF_DOCUMENT_TOKEN_TO_BE_REPLACED

U.S. President Biden has announced he will be excluding Saudi Crown Prince Mohammed bin Salman from future talks between Washington and Saudi Arabia. Is this just lip service that ... END_OF_DOCUMENT_TOKEN_TO_BE_REPLACED

The foreign policy direction favoured by Washington's new incumbent is putting a strain on relations with Turkey. The two nations look set to clash over a whole host of issues, ... END_OF_DOCUMENT_TOKEN_TO_BE_REPLACED

How can we truly appreciate the richness of cultures not our own? In her recent book "What is Islamic art? Between religion and perception", art historian Wendy Shaw explains the ... END_OF_DOCUMENT_TOKEN_TO_BE_REPLACED

In his controversial book published in 2020, French author Pascal Bruckner describes anti-Muslim sentiment as a fiction, claiming that the term "Islamophobia" is being used to ... END_OF_DOCUMENT_TOKEN_TO_BE_REPLACED

Several media reports in recent weeks have focused on the potential threat presented by Islamist groups in Germany. The discourse is fraught with generalisations, both sides ... END_OF_DOCUMENT_TOKEN_TO_BE_REPLACED
Author:
Stefan Weidner
Date:
Mail:
Send via mail

END_OF_DOCUMENT_TOKEN_TO_BE_REPLACED
Social media
and networks
Subscribe to our
newsletter