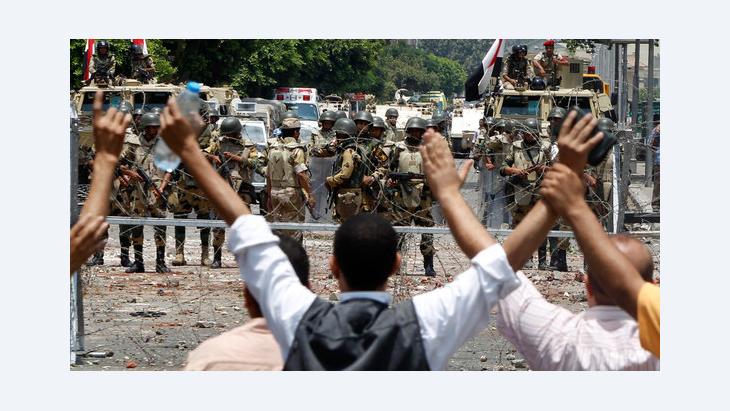 After the Military Coup in Egypt

﻿Since the ousting of President Morsi, the struggle for power in Cairo has continued unabated. As the violence escalates without check, it has proven impossible for all sides to agree on a candidate for the post of interim prime minister. Karim El-Gawhary in Cairo has the details

﻿Egypt is well on its way to becoming an ungovernable country.With every passing day, it is becoming clearer that the ousting of Mohammed Morsi by the military has intensified the polarisation of the Egyptian people.

This is evident not only in the fact that the Muslim Brotherhood and its opponents are still mobilising their supporters on the streets but also in that, ironically, both of them claim to be doing so in the name of legitimacy. In their demonstrations, the Muslim Brotherhood and its supporters are emphasising the legitimacy of the elected president, Mohammed Morsi, who has been under arrest and incarcerated in a military barracks in Cairo since last Friday evening.

Their opponents are calling on their supporters to take to the streets and defend the "legitimacy of the people". They argue that a majority of Egyptians showed in mass demonstrations that they had withdrawn their support for Morsi and that the military came to the people's aid. If there was a competition to select the most ghastly, over-used (and quite possibly misused) word of the year in Egypt, the word "legitimacy" would certainly be up there with a chance of winning. It is currently being used by all sides in this crisis.

The end of the road for ElBaradei

At this stage, the search for a new Egyptian prime minister seems to have deteriorated into a game of "he loves me; he loves me not". Mohamed ElBaradei is Egypt's new head of government; no, he isn't. Yes, he is; no, he isn't. 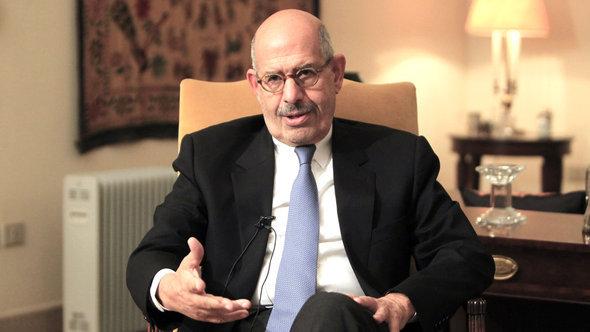 Politically sidelined: on Saturday, 6 July, it was announced that the liberal Nobel Prize laureate Mohamed ElBaradei had been appointed interim prime minister. The announcement was quickly withdrawn in response to the opposition of the Islamist al-Nour party

​​Initially, the state news agency reported that the former director general of the International Atomic Energy Agency and spokesperson for the National Salvation Front had been appointed to the office.

Just a short time later, on Saturday evening (6 July), a spokesperson for the president slammed on the emergency brakes. ElBaradei, said the spokesperson, was a strong candidate, but nothing had been decided as of yet; consultations were ongoing.

While Tamarod, the country's new protest movement, considers ElBaradei to be an ideal candidate, he is rejected above all by the Salafi al-Nour party, the only representatives of political Islam in Egypt to have supported the coup.

To have Al-Nour, which is funded by Saudi Arabia, on side would be of symbolic importance for the new government, because it would allow the government to say that at least some of the Islamists are on board for the transition period leading up to the new presidential election.

Al-Nour argues that were ElBaradei to be appointed, Egypt's leadership would have been passed from one end of the political spectrum (i.e. Morsi) to the other. The Salafists are demanding a better consensus candidate. 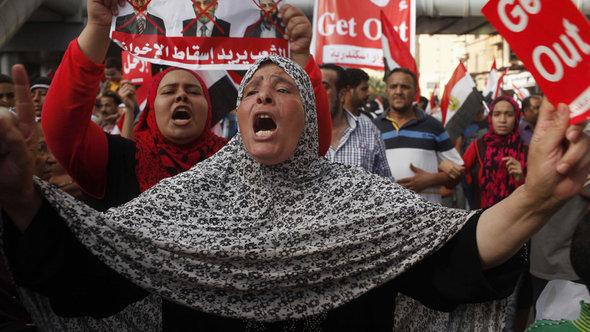 Showing the Islamists of the Muslim Brotherhood and al-Nour the red card: opponents of the ousted president, Mohammed Morsi, demonstrate in Cairo

​​ Whoever ultimately becomes the head of government, it is already clear that he will have very little room to manoeuvre, wedged as he will be between the opposing interests of a government alliance.

But the Muslim Brotherhood, which is at present completely outside the formal political system, is not the only group to reject ElBaradei out of hand. He is second only to Abdul Fattah al-Sisi, the head of the military, as the person the brotherhood most loves to hate.

However, the Muslim Brotherhood rejects not only the man himself, but also the entire system of interim president and interim government, which has yet to be formed. As far as the brotherhood is concerned, Morsi is still the legitimate president.

Strategy to split the Muslim Brotherhood?

Interim President Adly Mansour has invited the Muslim Brotherhood to talks, an invitation the brotherhood has publically rejected in a statement. It must be said that the state is sending out very contradictory messages to the Muslim Brotherhood. While leading members of the brotherhood are being arrested – including its chief strategist Khairat al-Shater, who was apprehended on Sunday, 7 July – the interim president is extending the hand of reconciliation.

On Saturday (6 July), a spokesperson for the president announced that talks are being held with the "Muslim Brotherhood Youth". What form these talks are taking is not clear. It is possible that an attempt is being made to divide the Muslim Brotherhood. Whether this attempt will succeed or whether the brotherhood will close ranks in these difficult times remains to be seen.

This is not about a few hundred jihadists. If elections were held in Egypt tomorrow, Morsi would still be able to count on millions of votes despite the fact that his popularity ratings have dropped. The most important thing for the future of the country is to ensure that the brotherhood's supporters do not end up entirely outside the political system.

The destabilising effect of "Egypt's Somalia"

It is also likely that increasing attention will be paid to northern Sinai in the near future. For years, militant Islamist groups have been causing trouble in the region, which is barely under state control. Northern Sinai could be described as "Egypt's Somalia". 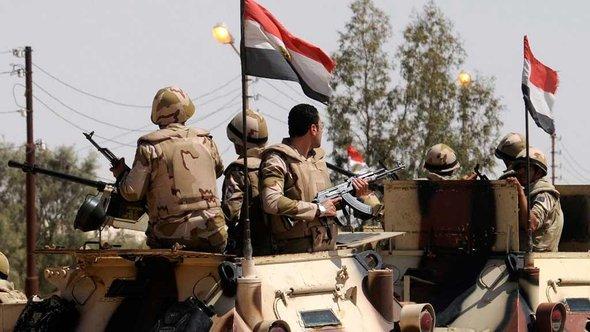 Security risk and convenient distraction in one? Militant Islamist groups have been carrying out attacks and causing trouble in northern Sinai for several years now. Karim El-Gawhary warns that this could be a sign of things to come. For the military, however, the unrest in northern Sinai provides some welcome distraction from the crisis in Cairo

​​The Islamists' most recent attacks on facilities belonging to the security apparatus, on Christians, and on a gas pipeline could be a sign of things to come in Egypt.

However, it is possible that the military will start using northern Sinai to gain the support of the majority of Egyptians. For days now, the media has been reporting not only on the attacks in the region, but also on the involvement of Palestinian Hamas, which is being built up as the new foreign enemy No.1. Right now, a military campaign in northern Sinai would be the best way to distract Egyptians from the enormous political problems in Cairo.

It remains to be seen how Ramadan, which begins this week, will affect the political conflict in Egypt. At the very least, the military will be hoping that the month of fasting will bring some calm. For their part, the Tamarod movement and the Muslim Brotherhood both know that it will be hard to mobilise Egyptians on the streets during this month.

At best, Ramadan could turn out to be a month of reflection, during which a way out of the political deadlock is sought. And if a solution is not forthcoming, it will at least be an opportunity for all sides to rally their troops. This will prove essential for them all; turbulent times lie ahead for Egypt.

Home
Print
Newsletter
More on this topic
Intervention of the Military: No Second Revolution on the NileEgypt in Turmoil: Derailing DemocracyPolitical Upheaval in Egypt: A Clear Message for the Brotherhood
Related Topics
Arab Spring, Arabellion, Egypt's army, Power struggle in Egypt, Muslim Brotherhood
All Topics

The Prophet Muhammad never executed anyone for apostasy, nor encouraged his followers to do so. Nor is criminalising sacrilege based on Islam’s main sacred text, the Koran. In ... END_OF_DOCUMENT_TOKEN_TO_BE_REPLACED

Archaeologists have uncovered the remains of an ancient city in the desert outside Luxor in Egypt. They say it dates back to the golden age of the Pharaohs more than 3,000 years ... END_OF_DOCUMENT_TOKEN_TO_BE_REPLACED

Surging coronavirus cases in many parts of the world have overshadowed the start of this year's Muslim holy month of Ramadan, with festivities once again curtailed by contagion ... END_OF_DOCUMENT_TOKEN_TO_BE_REPLACED

German Middle East analyst Guido Steinberg and television journalist Ulrich Tilgner have both published new books on the conflicts in the Middle East. Their analyses and their ... END_OF_DOCUMENT_TOKEN_TO_BE_REPLACED

Televised Turkish dramas are all the rage in the Middle East. A young Ottoman TV Empire has been expanding its soft power by harnessing regional dialects, Arabic names and viewers ... END_OF_DOCUMENT_TOKEN_TO_BE_REPLACED

Nawal El-Saadawi has died in Cairo at the age of 89. The prominent doctor, activist and author became internationally known for her outcry against female genital mutilation and ... END_OF_DOCUMENT_TOKEN_TO_BE_REPLACED
Author:
Karim El-Gawhary
Date:
Mail:
Send via mail

END_OF_DOCUMENT_TOKEN_TO_BE_REPLACED
Social media
and networks
Subscribe to our
newsletter