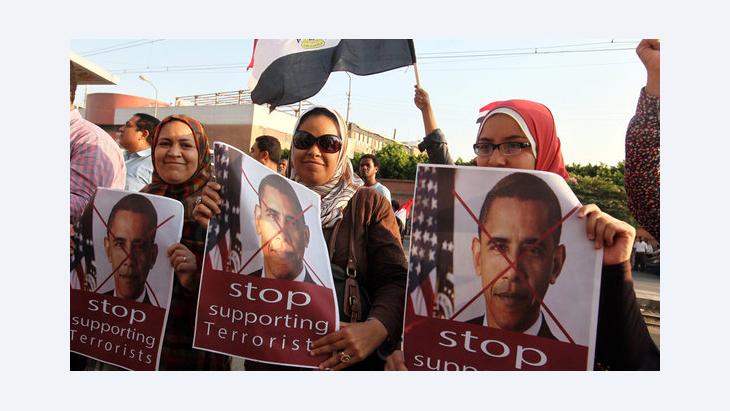 After the Military Coup in Egypt
State-tolerated Xenophobia

﻿﻿Egypt has been flooded by a wave of xenophobia. Not only Americans, but above all Palestinians and Syrians are suffering from regime-tolerated media agitation against foreigners. Matthias Sailer reports from Cairo

Foreigners don't have it easy right now in Egypt. Fuelled by state-tolerated media agitation, many Egyptians have begun to eye foreigners with suspicion or even treat them with outright hostility.

The United States has become a target of bi-partisan scorn. At both Islamist and secular demonstrations, one can see countless crossed-out portraits of US President Barack Obama. Many demonstrators also carry photos of the US ambassador with hateful insults written on them. Hardly a single demonstrator has anything good to say about Americans these days.

Anti-Morsi demonstrators accuse the US of having looked the other way, while the Muslim Brotherhood became increasingly authoritarian. The Islamists, on the other hand, hate the US because Washington supposedly allowed Mohammed Morsi to be ousted from power. Many Egyptians have become increasingly obsessed with conspiracy theories. 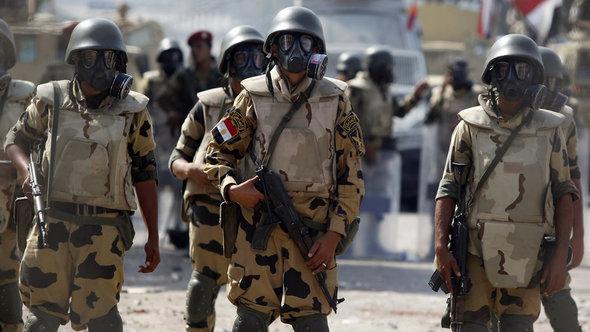 Army soldiers wear gas masks before clashes with members of the Muslim Brotherhood and supporters of deposed Egyptian President Mohamed Morsi at Republican Guard headquarters in Nasr City, a suburb of Cairo July 8, 2013. At least 51 people were killed when demonstrators enraged by the military overthrow of Egypt's elected Islamist president said the army opened fire during morning prayers outside the Cairo barracks where Morsi is believed to be held

​​"We had democracy, but the military didn't want that," Mohammed Hassen, an Islamist said. "Europe and the US put a lot of pressure on the military to overthrow Morsi, because they wanted to have their own interests in Egypt."

But the agitation against Syrian refugees and Palestinians has taken on much more serious dimensions. Since the first violent clashes between followers of the Muslim Brotherhood and anti-Morsi demonstrators, Syrians and Palestinians have been turned into scapegoats.

The military and security agencies claim that the Muslim Brotherhood paid Syrian refugees to shoot at soldiers and anti-Morsi demonstrators. Public as well as private television broadcasters have spread this rumor, launching a veritable hate campaign against Palestinians and Syrians.

Mostafa El-Gindi, a former parliamentarian, suggested on the private broadcaster ONTV that the streets should be sealed off near flashpoints and checkpoints erected there. That way "the non-Egyptians" could be identified. The Syrians and Palestinians caught at the checkpoints should be executed, El-Gindi said.

This kind of agitation finds fertile ground among some segments of the population. Most Egyptians are very nationalistic and worship the military. Some have come to view all Syrians as enemies of state, due to the rumors that they were paid to attack the military. For Syrians who've fled the violence in their homeland, this is a troubling development.

"It affects me, because now I can't move freely as before, especially going to the hotspots like downtown," Ahmed, a 27-year-old Syrian said. "It makes me sad whenever I'm sitting in a café and listening to people talking badly about Syrians."

During President Morsi's year in office, Syrians were allowed to enter Egypt without a visa. But the situation has changed dramatically since the military coup d'état. Due to the growing xenophobia, many Syrians leave their homes only when it's absolutely necessary. They are afraid of getting caught up in a police checkpoint and being deported back to their war-torn homeland. 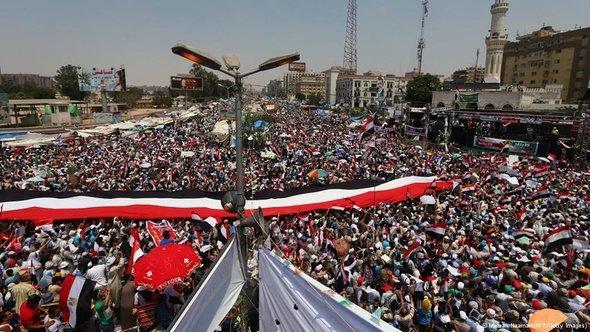 Foreign scapegoats: The military and security agencies claim that the Muslim Brotherhood paid Syrian refugees to shoot at soldiers and anti-Morsi demonstrators. "Public as well as private television broadcasters have spread this rumor, launching a veritable hate campaign against Palestinians and Syrians," Matthias Sailer writes

​​The military-installed government now requires Syrians to apply for a visa before entering Egypt. For Syrians who want to flee the civil war at home, entry into Egypt has become extremely difficult.

"The Egyptian authorities at the airport two weeks ago…sent back two planes," said Ahmed. "One of them came from Beirut and the other from Damascus. They sent them back with all passengers."

The passengers on board didn't know about the new visa rules, which had been implemented overnight.

Palestinians are anything but welcome in Egypt these days. Because of the bad media reporting, they are suspected of having connections with Hamas, which has its roots in the Muslim Brotherhood.

Hamas is being blamed for the much of the violence in Egypt. The detained ex-president, Mohammed Morsi, has been accused of escaping from jail with the help of Hamas during the 2011 revolution against Hosni Mubarak.

The current military-backed regime has capitalized on xenophobia in Egypt to kill two birds with one stone. On the one hand, the military can represent itself as the country's savior against foreign conspirators. On the other hand, it can play down its own violent crackdown, which most recently killed 50 Islamist protesters, and push the blame onto Palestinians and Syrians. And in the process, the Islamists are further discredited.

In Doha, Arabs from Morocco, Tunisia, Egypt and Algeria are gathering to celebrate the first ever FIFA World Cup to be held on Arab soil. The criticism from Europe? Over the top, ... END_OF_DOCUMENT_TOKEN_TO_BE_REPLACED

November 2022 sees the Arab world firmly in the spotlight with the COP27 in Egypt and the FIFA World Cup in Qatar. Public trust in MENA governments is weak, thanks to their ... END_OF_DOCUMENT_TOKEN_TO_BE_REPLACED

Palme d’Or winner "Boy from Heaven" is a classic crossover film in which cultural elements are mixed together in haphazard and random fashion. Shady Lewis Botros bemoans the ... END_OF_DOCUMENT_TOKEN_TO_BE_REPLACED

COP27 in Sharm el-Sheikh is turning into a PR disaster for Egypt’s military regime. Instead of praise for the host, the news is full of solidarity for imprisoned activist Alaa ... END_OF_DOCUMENT_TOKEN_TO_BE_REPLACED

END_OF_DOCUMENT_TOKEN_TO_BE_REPLACED
Social media
and networks
Subscribe to our
newsletter