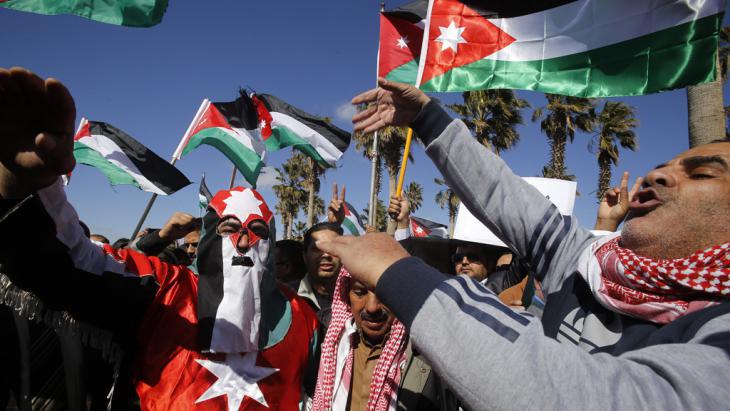 Burning the pilot Moaz al-Kasasbeh alive was meant to sow fear and discord in Jordan. It has in fact had the opposite effect. The Jordanian writer and literary critic Fakhri Saleh looks back on a harrowing and dramatic week in Jordan

The stills shown on television from the video of the Jordanian pilot Moaz al-Kasasbeh being burned alive were so horrific that I couldn't bring myself to watch the film "Islamic State" had posted on the Internet. Revulsion at such cruelty was stronger than my passion to get to the bottom of things. To this day, I haven't been able to watch the video: I made do with the description of it on television, which for the most part confined itself to words alone.

Listening to these words, I felt – not just as a Jordanian citizen, but as a human being – a numbness, a paralysis that took possession of my whole body. I stood as if turned to stone, increasingly unable to comprehend it, as a reporter described the video scene by scene, right up to the moments when Moaz a-Kasasbeh is seen struggling in vain against the flames as they consume his body, until all that is left is a heap of blackened ashes.

People are not made to have to watch such things. The shock of the Jordanian people was correspondingly great when they heard of the appalling death of the pilot, who had been captured by IS after his plane crashed. It was a shock that seemed at first to divide the people and set them against the government.

Some were of the opinion that Jordan should never have got involved in the fight against IS, which they said had nothing to do with us. Others thought the government hadn't done enough to secure al-Kasasbeh's release, like agreeing to IS's demand for the release of the al-Qaida terrorist Sajida al-Rishawi, who tried to carry out a suicide attack on a hotel in Amman in 2005 and had been in prison in Jordan ever since. Her death sentence was carried out as soon as the news of al-Kasasbeh's murder became known.

But IS didn't get the effect it had hoped for. Quite the opposite, in fact: people's emerging differences of opinion and the anger directed at the government subsided. Instead, people closed ranks, and calls for unconditional war against IS grew louder.

Jordanian king determined to fight IS 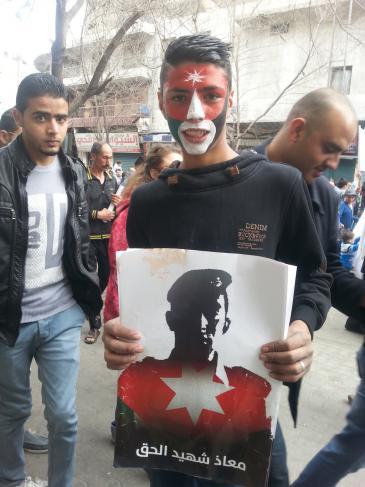 Young men join in a march in memory of the murdered Jordanian pilot Moaz al-Kasasbeh in Amman. IS did not get the reaction it was hoping for: "Quite the opposite, in fact: people's emerging differences of opinion and the anger directed at the government subsided. Instead, people closed ranks, and calls for unconditional war against IS grew louder," writes Fakhri Saleh

King Abdullah had repeatedly referred to the group as a gang of terrorists who had, he said, improperly appropriated the symbols of Islam and the term "caliphate". Visiting al-Kasasbeh's family, the king promised not to end the war against IS until the organisation had been annihilated and revenge taken for the life of the pilot who was murdered in such an atrocious manner.

Abdullah emphasised that Islam explicitly forbids the killing of children, old people, women and prisoners of war. While the king sat with al-Kasasbeh's relatives, the noise of fighter jets circling over the region could be heard in the background – a signal intended to assure people that the war against "Islamic State" would now be waged with the utmost bitterness, persistence and purpose.

From the reactions of people on the street, from the commentaries and opinion columns in the newspapers, it became apparent that Jordanians had indeed understood the message IS wanted to communicate with that harrowing, inhumane video: it was intended to intimidate, it was a threatening gesture, an attempt to frighten the country's soldiers even more than its civilian population.

Muhammad Abu Rumman, an expert on radical Islamist movements, explained how "Islamic State" had transitioned from the principle of "incorporating violence and destruction" to a "legal doctrine of blood". Both terms are the titles of papers drafted by the leading minds of IS.

The first is a reference to the work of the famous Muslim scholar and politician Ibn Khaldun. In his observations on world history, entitled "Muqaddimah", he also talks about dealing with the negative energies that almost inevitably come into play during the foundation of a state. The second paper Abu Rumman mentions draws on fundamentalist Sunni thought. It postulates the right of Islamists to kill "unbelievers" – be they Shia, non-Muslims, or those with different beliefs – in establishing the caliphate.

IS certainly doesn't tire of killing anyone who doesn't share their worldview one hundred per cent – even their own supporters. At this stage, the leaders of the terrorist organisation must be using such ideological purism not so much to gain new members as to close the ranks of their followers, in that the machinery of killing is working faster and faster, and every crime they commit is broadcast via the Internet and social media. 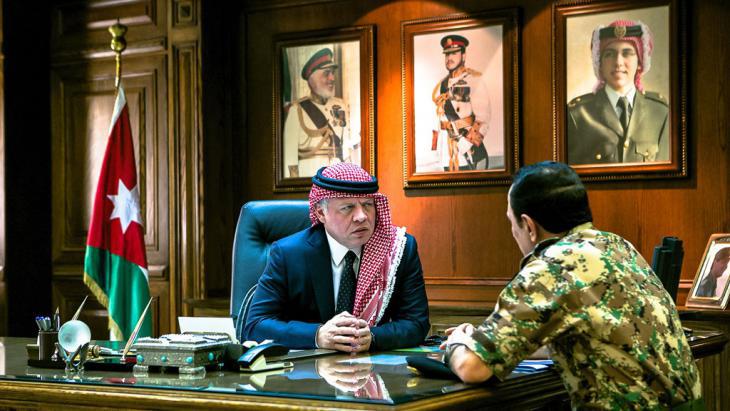 Prepared to take decisive action: after the appalling crime, Jordan's King Abdullah II declared "war without mercy" on the extremists. Just a few hours after the video showing Moaz al-Kasasbeh being burned to death was posted on the Internet, two extremists who had been sentenced to death by Jordanian courts were executed. One was a woman who had tried to carry out a suicide bombing in Amman in 2005 and whose release IS had demanded in exchange for the pilot's life

IS has alienated potential supporters

If IS has gained anything at all with its latest barbarity, it is bitter enemies. And if ranks have closed, they have done so not only in Jordan, but also in the Arab states that have joined the international alliance fighting the terrorist organisation. IS may enjoy a certain degree of sympathy among Sunnis in Syria and Iraq, as a result of the conflicts raging in those countries, but in countries like Jordan it has almost no popular support.

IS has probably also alienated some of its potential sympathisers with the murder of Moaz al-Kasasbeh. In any case, these sympathisers would at least be well advised to keep quiet about their convictions, because now they not only have the extremely efficient Jordanian secret service to fear but also the righteous anger of their fellow citizens.

Jordan is now in the eye of the hurricane. It is still difficult to gauge whether, in the long term, the government will succeed in rallying the people behind it and making them forget not only the latent tensions and conflicts between the different population groups, but also the ongoing economic crisis and the steadily rising cost of living.

What is clear is that the country is now involved – to a degree that was still unthinkable just a few days ago – in the war against a terrorist organisation that is prepared to stop at nothing: not at massacres, nor at locking a man in an iron cage and burning him alive, nor at boasting about this atrocity to the entire world.

Fakhri Saleh was active for many years in his homeland, Jordan, as a writer, critic and translator, and has published numerous works of literary criticism. He currently heads the Arabic department at Bloomsbury Qatar Foundation Publishing.

Muqtada al-Sadr, the most powerful man in Iraq

Popular support for Muqtada al-Sadr, progeny of the famous Sadr political dynasty, is on the ascendant in Iraq. Leader of the main opposition Shia faction, Sadr is also no ... END_OF_DOCUMENT_TOKEN_TO_BE_REPLACED

The Middle East is plagued by electronic armies working at the behest of one regime or another. Long used by those in power as a weapon in the fight against activists and ... END_OF_DOCUMENT_TOKEN_TO_BE_REPLACED

Reading Hassan Blasim's God 99 is an immersive experience of grief and exaltation, anger and disgust, writes Marcia Lynx Qualey. We join the Iraqi narrator as he sits around in ... END_OF_DOCUMENT_TOKEN_TO_BE_REPLACED

By stage-managing his re-election in a poll widely dismissed as a farce, Syria's President Bashar al-Assad has killed two birds with one stone: he has forced his compatriots to ... END_OF_DOCUMENT_TOKEN_TO_BE_REPLACED

In his book "Ground Zero: 9/11 und die Geburt der Gegenwart" (Ground Zero: 9/11 and the Birth of the Present) Islamic scholar Stefan Weidner analyses the consequences of the ... END_OF_DOCUMENT_TOKEN_TO_BE_REPLACED

The rollout of coronavirus vaccines in the Middle East and North Africa is already taking place on a massive scale, with the United Arab Emirates leading the way. Nevertheless, ... END_OF_DOCUMENT_TOKEN_TO_BE_REPLACED
Author:
Fakhri Saleh
Date:
Mail:
Send via mail

END_OF_DOCUMENT_TOKEN_TO_BE_REPLACED
Social media
and networks
Subscribe to our
newsletter