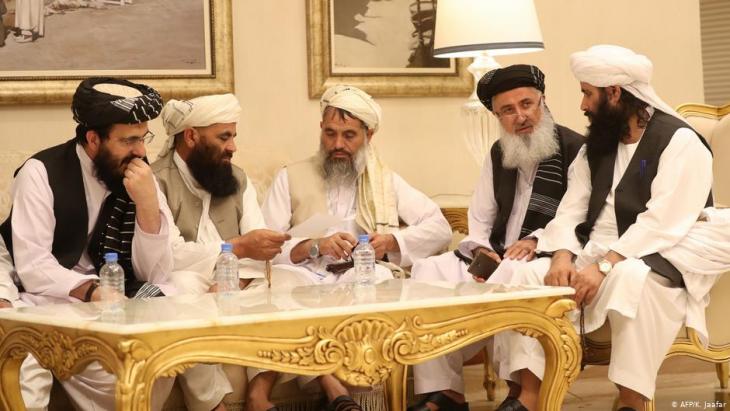 Under the tutelage of Pakistan's military, the Taliban brought peace to Afghanistan the last time it ruled the country. But it was the peace of the graveyard, which it could establish once again – this time with the support of the United States. India is watching developments closely. By Shashi Tharoor

At the recent World Cup cricket tournament in England, a plucky Afghan team composed mainly of former refugees gave a surprisingly good account of themselves, including in matches against their neighbours, India and Pakistan. Unfortunately, the same cannot be said of two other Afghan teams – the Taliban and the government – that met in Doha, Qatar, earlier this month to agree on a "road map for peace".

The Afghan government officials who participated in the Doha talks could not even claim to be what they were, because their interlocutors, a murderous band of fanatics, do not recognise the Afghan government. Instead, the delegation was politely described as a group of representatives from Afghanistan, without saying whom exactly they represented.

After two days of talks, the participants agreed on eight points in a joint resolution, prompting Zalmay Khalilzad, the US Special Representative for Afghanistan Reconciliation, to tweet that the talks had "concluded on a very positive note". He congratulated the participants "for finding common ground."

No let-up in violence

Observers in India – Afghanistan's second-largest aid donor after the United States – could be forgiven for a dose of scepticism. For one thing, the two sides had agreed in Doha to reduce "civilian casualties to zero". But even while they were meeting, their "common ground" – the soil of Afghanistan – was being soaked in blood from relentless attacks by the Taliban, who had rejected a ceasefire for Eid al-Fitr, the traditional Muslim holiday at the end of the holy month of Ramadan.

The violence has not abated since, with a series of Taliban attacks leaving dozens dead and hundreds injured in recent days. On 1 July, Taliban fighters killed up to 40 people in an attack on a government compound in Kabul. Six days later, the Taliban carried out a suicide bombing on a national intelligence complex in central Ghazni province, leaving at least a dozen people dead and some 180 wounded. In both attacks, a number of nearby buildings were damaged, including schools in the vicinity, killing and maiming children. According to the New York Times's weekly Afghan War Casualty Report, the death toll between 28 June and 4 July was the highest so far in 2019, with 264 government personnel and 58 civilians killed. 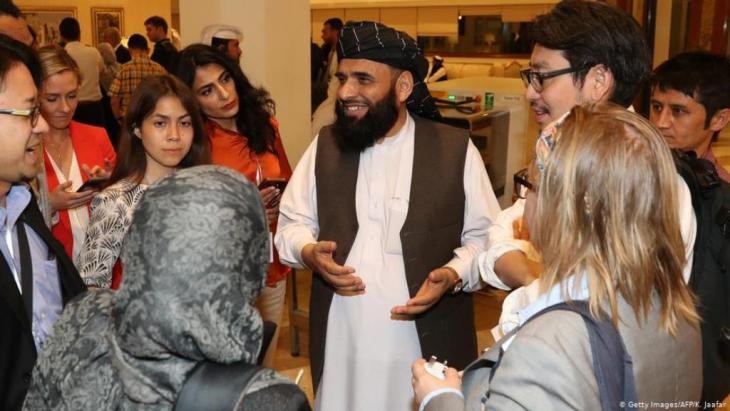 According to Shashi Tharoor, the Afghan government officials who participated in the Doha talks "could not even claim to be what they were, because their interlocutors, a murderous band of fanatics, do not recognise the Afghan government. Instead, the delegation was politely described as a group of representatives from Afghanistan, without saying whom exactly they represented." Pictured here: Sohail Shaheen, representative of the Taliban at the talks in Doha

The conflict shows no signs of ending. Winston Churchill reportedly argued that "jaw-jaw is better than war-war", but the Taliban have perfected the art of talking while fighting. They have made no secret of their desire to restore their Islamic Emirate, which ruled – and brutalised – Afghanistan from 1996 to 2001, until it collapsed under a hailstorm of US bombs in the wake of the 9/11 terrorist attacks in 2001.

US: Eighteen years in Afghanistan

With that successful assault on a vicious regime, the US inherited the problems the Russians had tried to solve during their disastrous occupation of Afghanistan from 1979 to 1989. With the Soviet Union's departure, Afghanistan was plunged into years of civil war and fratricidal killing, culminating in the Taliban's takeover and establishment of a strict Islamic theocracy, featuring frequent executions, amputations and stonings. Girls were barred from school, and women – forbidden to venture out of their homes without an accompanying male guardian – were rendered publicly invisible by the burqa. Cinema, television and music were abolished. Under the tutelage of Pakistan's military, the Taliban brought peace to Afghanistan, but it was the peace of the graveyard.

A month after 9/11, the US-led NATO mission "Operation Enduring Freedom" destroyed the Taliban government. The hope was that freedom would endure without an enduring American presence in Afghanistan. But, with significant assistance from their Pakistani patrons, the Taliban regrouped and embarked on a well-resourced campaign to take back their country from the occupiers. Eighteen years later, the US is still there, albeit under a new banner – "Operation Freedom's Sentinel", adopted in 2015. The international coalition has incurred some 3,500 casualties, and many of the countries that had been press-ganged by the US into participating have pulled out. The US would dearly like to do the same, rather than incurring more casualties, with no end in sight. But to withdraw under Taliban assault would be an admission of defeat.

Now, however, that calculus has evidently changed. Like his predecessor, Barack Obama, US President Donald Trump campaigned for his job on a promise to withdraw American troops from the country. Unlike Obama, however, Trump is determined to cut his losses, and has fully embraced peace talks with the Taliban, with the principal purpose being to permit the orderly – and complete – withdrawal of US forces from Afghanistan. 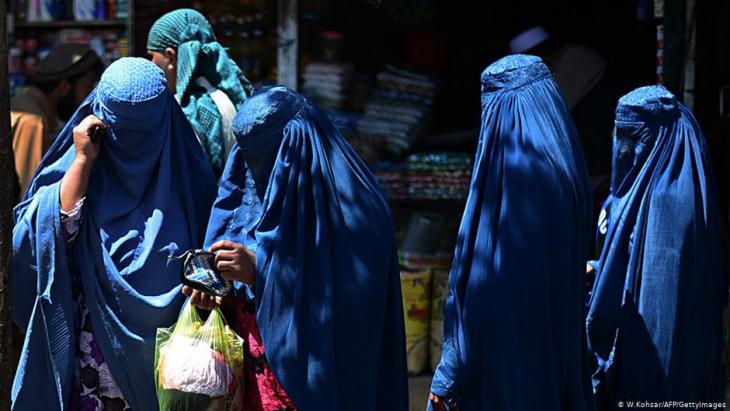 The last time the Taliban ruled Afghanistan, writes Shashi Tharoor, they brought peace to Afghanistan: "but it was the peace of the graveyard". During the period of Taliban rule in Afghanistan, girls were not allowed to attend school and women were forbidden to venture out of their homes without an accompanying male guardian. They were also obliged to cover themselves with a burqa (pictured here)

India has watched with concern as this process has unfolded. The Taliban's Islamic Emirate was involved in the hijacking of an Air India plane to Kandahar in 1999, resulting in the loss of Indian lives and even greater loss of prestige, as India's government acceded to the hijackers' demand for the release of three Pakistani terrorists. The last thing India wants is the return of an Islamist Taliban regime in its neighbourhood.

India's alarm is understandable. Encouraged by the security established by the international coalition forces, India has invested more than $2 billion dollars in Afghanistan. It has helped to build the country's largest hospital for women and children, erect schools, construct the Afghan-India Friendship Dam (formerly known as the Salma Dam), carve the Delaram-Zaranj Highway across the country's southwest (to open trade routes to the West), ensure uninterrupted electricity in Kabul and even build the new Parliament.

But no one in India believes the Afghans are anywhere near ready to manage their security without any international presence. After all, Taliban attacks have killed 1.4–2 million Afghans since 2001. The fact that the US is talking to the group, and even pressing the Afghan government to do so, without any credible assurances that the Taliban will lay down its weapons, is deeply dismaying, to say the least.

India's objective has been to stabilise Afghanistan's democracy and strengthen its civil society, so that Afghans are better able to take control of their own destiny. This is also why cricket-obsessed India gave Afghanistan's national team a home and watched, in admiration, as the players demonstrated their excellence at the World Cup. The last time the Taliban ruled, they banned cricket, too.

Home
Print
Newsletter
More on this topic
Peace talks with the Taliban: Where are Afghanistan's women?Negotiating peace with the Taliban: Any deal will doThe legacy of 9/11: Why the world needs to re-think its war on terrorQantara dossier: Afghanistan
Related Topics
9/11, Islam and the West, Taliban, U.S. policy in the Middle East
All Topics

In his book "Ground Zero: 9/11 und die Geburt der Gegenwart" (Ground Zero: 9/11 and the Birth of the Present) Islamic scholar Stefan Weidner analyses the consequences of the ... END_OF_DOCUMENT_TOKEN_TO_BE_REPLACED

To Afghans, the name "Panjshir" evokes associations with the Tajik resistance against the Soviets during the 1980s. But the special charm of the province lies in its landscape. ... END_OF_DOCUMENT_TOKEN_TO_BE_REPLACED

The USA and NATO plan to withdraw from Afghanistan by September. The operation is risky, the outcome uncertain. Many Afghans fear civil war. The quake on the Hindu Kush will also ... END_OF_DOCUMENT_TOKEN_TO_BE_REPLACED

Even in times of war and pandemic, refugees are still being deported to Afghanistan. Several deportation flights have taken place in recent weeks alone. Since those affected often ... END_OF_DOCUMENT_TOKEN_TO_BE_REPLACED

The Prophet Muhammad never executed anyone for apostasy, nor encouraged his followers to do so. Nor is criminalising sacrilege based on Islam’s main sacred text, the Koran. In ... END_OF_DOCUMENT_TOKEN_TO_BE_REPLACED

Afghanistan's government distanced itself from a recent plan to ban girls from singing in public after women's rights activists slammed education officials for promoting a " ... END_OF_DOCUMENT_TOKEN_TO_BE_REPLACED

Comments for this article: A test match with the Taliban

It is quite evident from this writing that now India is feeling isolated in post US withdrawal era after investing so much in Afghan puppet government.

END_OF_DOCUMENT_TOKEN_TO_BE_REPLACED
Social media
and networks
Subscribe to our
newsletter