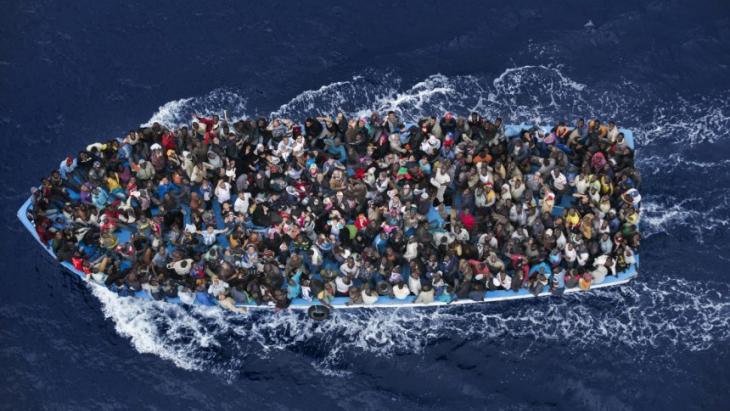 The figure is shocking: an estimated 800 people lost their lives when a boat carrying refugees sank off the coast of Libya. According to Heribert Prantl, the EU has the ways and the means to rescue refugees in the Mediterranean, but because it is guided by a cynical logic, it is letting them drown

EU politicians have the ways and the means to rescue the refugees who have escaped the hell of Syria and Libya; but they are being left to drown. Their deaths are tolerated, accepted; they are supposed to act as a deterrent to other refugees, to stop them fleeing. Europe is using dead refugees to protect itself from refugees.

Is this the new refugee policy that Martin Schulz, president of the EU parliament, announced 18 months ago over the coffins of Lampedusa? Back then, 368 refugees died on a single day. And now an estimated 800 people have died on a single day, in the Mediterranean, on their way to Europe. There has been no change in refugee policy, and if there has, it is a change towards the inhumane. And the barbaric acts taking place in the refugee boats (a group of refugees is said to have thrown others into the sea) are no excuse for acting barbarically ourselves.

The Mare Nostrum rescue programme, launched by Italy following the Lampedusa catastrophe, has been brought to an end. The EU refused to finance it. The cost of the rescue programme would have been about the same as what is being spent on the upcoming summit of heads of state and government in Elmau. The summit will last for two days. That money could have been used to organise 365 days of rescue operations. Are these European values? This union kills; it kills through neglect, and failure to provide assistance. 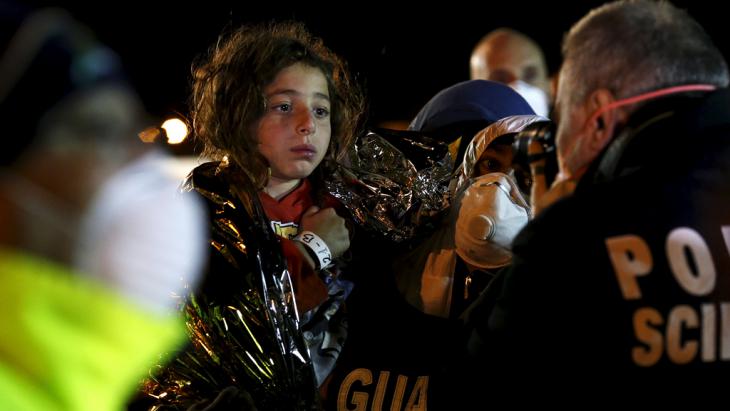 Italian police (right) photograph a child after migrants arrive via boat at the Sicilian harbour of Pozzallo, 19 April 2015. On Thursday, 23 April, European Union leaders pledged to double the size of the EU's Mediterranean border operation Triton, tripling its budget and offering ships and aircraft to try to halt the migrant deaths

A deterrent that goes against international law

The German Federal Minister of the Interior, Thomas de Maiziere, is against an EU emergency sea rescue service. He says it would be playing into the hands of the people-traffickers. This is cynicism. This is an instrumentalisation of the deaths of human beings in order to combat a form of criminality that is itself the result of a bad EU policy. The plague of people-traffickers is only able to spread because Europe has battened down the hatches and is doing everything it can – including going against international law – to keep the refugees out.

Visas are required to enter Europe from all the refugees' countries of origin – even those in the grip of extreme hardship. This means that without a visa, people cannot get to Europe. But these people are not being issued visas. In short: there is no legal way for them to enter the EU. And refugees are being turned away at the borders, against all the rules of humanitarian international law.

The EU has to create legal routes of entry. The EU has to suspend its visa requirements for a certain period. The EU has to take asylum applications from people in their countries of origin. Refugees from countries that are going through hell must be accommodated in the EU. The EU is a past winner of the Nobel Peace Prize. An EU that looks on as people die should have that prize taken away. A union that regards and uses the sea as its ally is a murderous union.

Since Ali Khamenei, Iran's most powerful man, has openly and unconditionally come out in support of Putin's war in Ukraine, logistical help is on its way, with an allegedly ... END_OF_DOCUMENT_TOKEN_TO_BE_REPLACED

Tourists have been returning to Tunisia, Egypt and Morocco. But, given the global uncertainty caused by the Ukraine war, will the comeback be enough to save a struggling sector, ... END_OF_DOCUMENT_TOKEN_TO_BE_REPLACED

The highly controversial Indian blockbuster "The Kashmir Files“, on the exodus of Kashmiri Hindus in the 1990s, is characterised by unilateral representations, negative ... END_OF_DOCUMENT_TOKEN_TO_BE_REPLACED

"Flugt" is the world's first museum dedicated to the stories of those forced to flee. The new museum, which focuses on the fates of refugees then and now, is housed in a former ... END_OF_DOCUMENT_TOKEN_TO_BE_REPLACED

Comments for this article: How the EU is killing refugees

1951 UN Convention Relating to the Status of Refugees & 1967 Additional Protocol are being flagrantly violated by the EU. Articles 31 and 33 of the 1951 UN Convention are under blatant attack by those very countries who emplaced this Convention in commensurate with High Ideals enunciated in European Social Charter of 1949 and European Charter of Human Rights whereunder EU migration and asylum policy has been made an antidote to the exclusionary and securitized migration policy that has been enacted through inter-governmental cooperation. Communitarization will not necessarily occur simply because the European Union is intent upon instituting ever stricter immigration controls. Communitarization is dogged by the legacy of intensive trans-governmentalism.

END_OF_DOCUMENT_TOKEN_TO_BE_REPLACED
Social media
and networks
Subscribe to our
newsletter