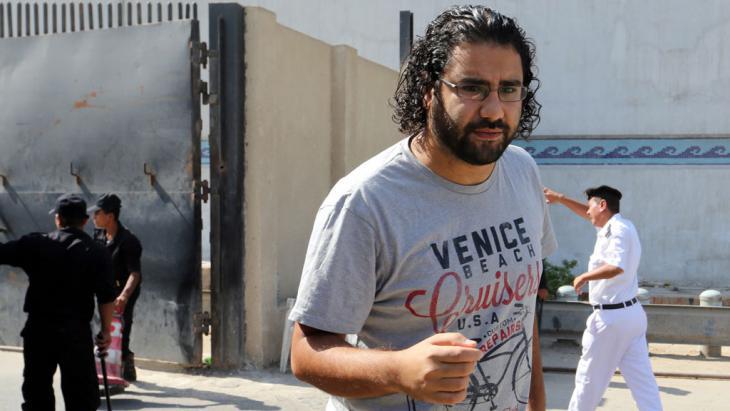 The well-known Egyptian blogger Alaa Abdel-Fattah has been released on bail. Is it a sign that the powers that be in Cairo are ready to allow increased freedom of expression? Egyptian filmmaker and activist Omar Hamilton says it's not. Interview by Sella Oneko

How significant is the release of Alaa Abdel-Fattah for you and other Egyptian journalists and activists?

Omar Robert Hamilton: It's a refreshing piece of good news, but people are not celebrating too much. It's just a chance to take a breath. He still has charges against him, and the trial is still ongoing. The judge has taken himself off the case, and we don't know exactly why. Until all the charges are dropped and the protest law is rescinded, no one has any illusions that Egypt is moving in the direction of justice. 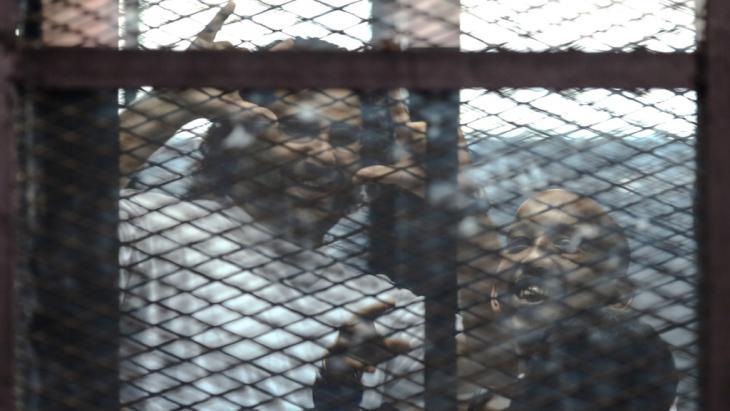 The well-known blogger Alaa Abdel-Fattah (left, pictured here during his court case in Cairo) was sentenced to 15 years in jail for organising a protest against the government. In August, dozens of activists went on hunger strike in protest at the continued detention of protestors and activists. On 15 September, Abdel-Fattah was released on bail

What message do you think the judiciary and the government are trying to send out by releasing him on bail?

Hamilton: It's very hard to guess what they're thinking. Alaa's sister, Sanaa, has also been in jail since 21 June for protesting. She's been on hunger strike now for 20 days. The judge set her next trial date for 11 October. And then, three days later, the judge takes himself off Alaa's case.

Maybe this is a case of the state taking with one hand and giving with the other. It could be any number of things: that they want a tougher judge or that they were significantly embarrassed when the prosecution showed a home video of Alaa's wife, which they stole when they raided their house at night without a permit. That's a story that went all around the world.

Has the government's attitude towards critics changed your job as a journalist?

Hamilton: It has made everything much harder. Authoritarianism is at a peak level that it didn't reach even under Mubarak. There is an attempt to shut down all the usual incubators of dissent, such as the universities, the media, NGOs or human rights lawyers. It's a systematic, across-the-board crackdown. They know where the revolution was born and which networks brought it to life, and they're trying to shut them down, piece by piece. So it's very difficult to work right now. You can get arrested for anything. You can get arrested for putting up stickers or for having a letter from a prisoner in your bag. 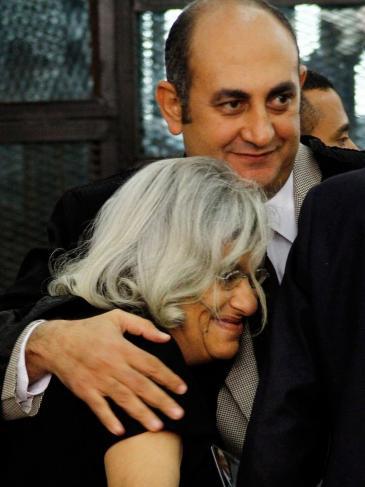 Have you ever been arrested?

Hamilton: No. I've only been detained briefly and had some equipment confiscated by the army during protests.

Egypt's President, Abdul Fattah al-Sisi, has been in office for a little over 100 days. On a scale of one to ten, what mark would you give him for upholding freedom of expression?

Hamilton: Zero. The first thing they did after taking power was shut down all the Islamist TV channels and, piece by piece, they're trying to close down every last avenue there is. The police are building something called the electronic grip, which they're going to use to monitor all kinds of colloquial Arabic that people use on social media. All the independent satellite channels have been co-opted into the media line. There are about 25 people who control the media, and if you get those people on your side, then you're fine. The independent newspapers that still dare to publish anything critical have a very clear red line that the editors won't cross. So freedom of expression is at an all-time low here.

If you were in government, what would be the first three things you would change to guarantee freedom of expression and the media?

Hamilton: Well, they need to stop the things that they're doing. The infrastructure that existed was a relatively vibrant atmosphere of independent media and of free speech and of people still speaking up.

A radical overhaul of the members of government is needed, or there needs to be a significant pushback from the public to show that they are not willing to be told what they can and cannot say. It will come, but right now, things are getting worse and worse. If I was the government, I wouldn't need to do anything to guarantee the freedom of media. I would just need to not attack it.

Omar Robert Hamilton is an Egyptian filmmaker. He writes for both Egyptian as well as international newspapers like "The Guardian". He is also a founding member of the activist media collective Mosireen.

Algeria‘s regime is again cracking down on anti-fracking activists and the unemployed in the country‘s south. Yet EU countries remain keen to scale up their energy cooperation ... END_OF_DOCUMENT_TOKEN_TO_BE_REPLACED

The murder of a female student at Mansoura University in the Nile Delta has sparked a long overdue debate on femicide in Egypt. Karim El-Gawhary reports from Cairo END_OF_DOCUMENT_TOKEN_TO_BE_REPLACED

Syria, Egypt, Saudi Arabia and the UAE are among those countries increasingly misusing cybercrime legislation to silence dissent and curb freedom of speech. Could a new global ... END_OF_DOCUMENT_TOKEN_TO_BE_REPLACED

Egypt hopes to jump-start the action needed to face a warming world when it takes the presidency of major UN climate talks in November, but warns that countries need a "reality ... END_OF_DOCUMENT_TOKEN_TO_BE_REPLACED

A ceasefire has been in effect in Libya for the past year and a half. Yet after Russia's attack on Ukraine, another proxy war looms in Africa's most oil-rich country. Mirco ... END_OF_DOCUMENT_TOKEN_TO_BE_REPLACED

It is the biggest order in the history of the Siemens Group: a 2,000-kilometre railway network for high-speed trains is to be built in Egypt. But the project raises numerous ... END_OF_DOCUMENT_TOKEN_TO_BE_REPLACED
Author:
Sella Oneko
Date:
Mail:
Send via mail

END_OF_DOCUMENT_TOKEN_TO_BE_REPLACED
Social media
and networks
Subscribe to our
newsletter