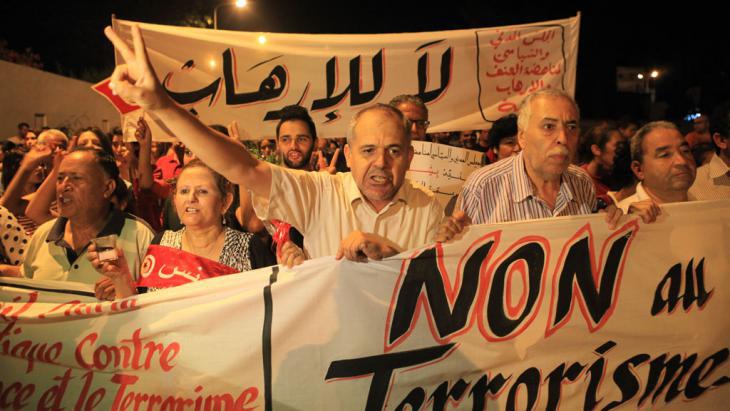 After the Sousse attack

Following the attack on a beach hotel near Sousse, which claimed the lives of 38 and injured 39 others, many Tunisians took to the streets to demonstrate against Islamist terror in their country and call for a tightening of security laws. Report from Sousse by Karim El-Gawhary

Following the attack on a beach hotel near Sousse, which claimed the lives of 38 and injured 39 others, many Tunisians took to the streets to demonstrate against Islamist terror in their country and call for a tightening of security laws. Report from Sousse by Karim El-Gawhary

It is a surreal scene on the beach of the "Imperial Marhaba Hotel" in the Tunisian city of Sousse. Most people still cannot believe what happened here. Some of the sun loungers have been sealed off with a yellow cordon to mark the crime scene. Everywhere you look, there are journalists with television cameras, regular cameras and note pads tramping through the white sand. There are still some families here on holiday, and they stroll along the water's edge in their swimming trunks and bikinis, stopping for a moment out of curiosity.

Others come to lay flowers. Some of the tourists cross themselves. In the centre of the mound of flowers, someone has placed a piece of paper bearing the simple question: "Why?" written in large letters. Why were 38 people shot dead here by a Tunisian student? Unsuspecting tourists who had been sunbathing on these very same loungers.

Most of the hotel guests have since left. A few have remained and sit defiantly around the pool, among them a couple from the German Sauerland region. They had been on an excursion when the attack happened. If they hadn't decided to go on the short trip, they would probably have also been down on the beach. When they returned from their excursion, they saw bodies being carried out of the hotel. But although their tour operator had given them the option of doing so, they didn't want to leave. "We also wanted to make it known that we won't be beaten by these idiots!" says Raimond Mensebach. "They cannot be allowed to achieve their goal."

One of these "idiots", as the German tourist calls them, was 23-year-old student Seifeddin Rezgui, who had up to that point done nothing out of the ordinary when he showed up on Sousse beach with an assault rifle last Friday (26.06.2015), to instigate a blood bath, an act that "Islamic State" later claimed responsibility for online. 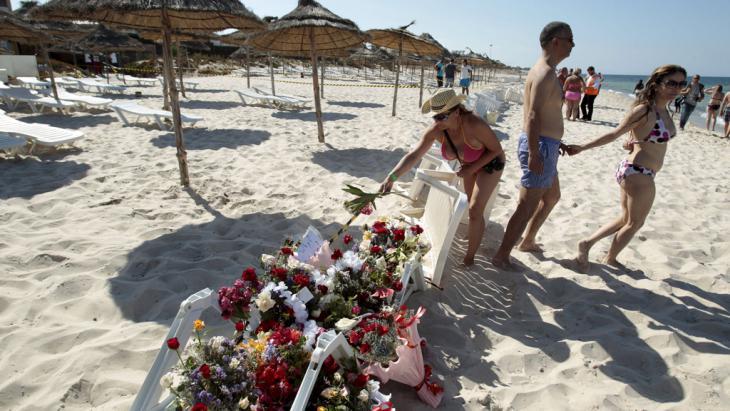 Grief and shock following the Sousse attack: Last Friday (26.06.) a gunman killed 38 people and injured 39 others on the beach in Port El Kantaoui near Sousse. At least 30 of the dead were thought to be British, making this the largest loss of British life in a terrorist attack since 7/7

The failure of security forces

According to an account from eyewitness Amir Ben Hajj Hasein, the Tunisian security forces do not deserve any medals for their conduct on the day of the attack.  He says he heard shots and saw tourists running away. Because his parents were on the beach, he began running in the opposite direction. At this moment, the attacker was firing indiscriminately at people around the pool. Five minutes later, two members of the Tunisian National Guard were on the scene. But, says the eyewitness, they were afraid to go down to the beach. One of them had to be forced by residents to hurry to the scene of the attack, and he even hid behind local people. The police officer allegedly fled when a grenade exploded.

Meanwhile, hotel staff and local residents tried to bring as many tourists as possible to safety. An entertainer working at the hotel eventually begged a police officer to give him his weapon, to allow him to confront the attacker. Then the attacker calmly walked away from the scene, initially in the direction of a nearby hotel, before apparently deciding to go up to the road. There, he was hit by stones and other objects thrown at him by local people. One threw a bathroom tile at him from a rooftop, hitting him on the head.

"Do what you want, I won't shoot you!" the attacker is alleged to have cried out, and eyewitness reports say he had indeed aimed solely at foreign tourists. He is alleged to have said to one Tunisian who tried to grab his gun: "Leave me alone, Tunisians will come to no harm." The attacker was eventually shot in the head by a policeman who had appeared on the scene in the meantime.

Recovering from the shock

It was also quite a while before the political world in Tunisia woke up from its nightmare and post-shock paralysis. Last Saturday at dusk, as people were breaking their fast for Ramadan, they gathered in several places in Sousse for rallies in the city centre, but also in front of the hotel just outside the city, where the attack had taken place.

"We are taking a concerted stand against terrorism!" they called out, singing the national anthem and demonstrating political solidarity. Politicians from the secular "Nidaa Tounes" party, "Ennahda" and Tunisian opposition groups were in attendance, but also many representatives of civil society organisations. "We must all stand together at this difficult time," Labour Minister Zied Ladhari of the "Ennahda" party, who was also present, told Qantara.de. "The terrorists hate our democratic project – the only successful one of its kind thus far in the Arab world," he added. The Tunisians may have lost this one battle, but the war on terror will be won in the end – even though he believes this will require great staying power.

This war is being waged on many fronts: within the police apparatus, within the education system, and in the Tunisian business world. Zied Ladhari also approves of the government's latest decision to close 80 mosques viewed as recruitment strongholds for radical Islamists. He concedes that there was a certain "religious chaos" after the revolution. Religious freedom is of course guaranteed by the constitution. But this can absolutely be restricted if people try to legitimise violence in the name of religion, says the Labour Minister. 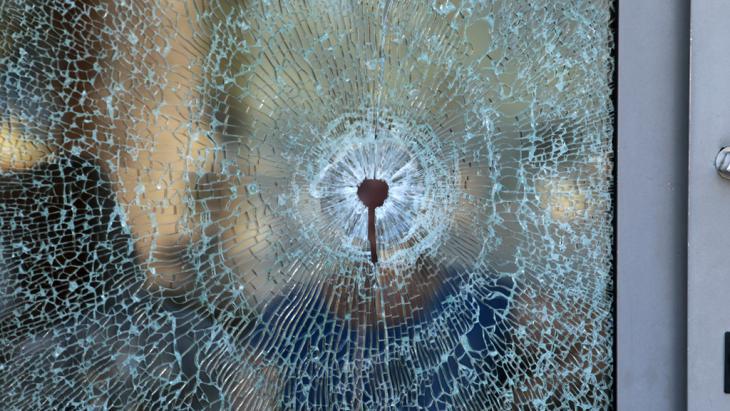 Tunisia's vulnerability in the face of terrorism: The attack deals a severe blow to the nation's tourism sector, which directly or indirectly employs 400,000 people and generates seven per cent of the country's GDP. Only last March, 21 tourists were killed in an attack on the Bardo National Museum in Tunis

The mayor of Sousse, the third largest city in Tunisia, also attended the rally and was willing to comment: "Terrorism knows no fixed place or time. It can affect anyone. In this case, it is aimed at our democracy," said Abdel Malik Salameh. For this reason, he is calling for more stringent security measures and above all, more effective intelligence work. "We must act to tackle these terrorists," said Salameh. And this must happen in advance of the planning and realisation of such operations, he added.

Other demonstrators, such as the French teacher Shiraz Shedli, who wrapped herself in a Tunisian flag on this particular evening, were also calling for the authorities to take a tougher line with radical Islamists. "Their mosques must be shut down, their political representatives, such as the Tahrir Party, which is calling for a Caliphate in Tunisia, must be banned," she said. "We need a new anti-terrorism law, and we won't waste any time waiting for something even worse to happen. And above all:  We must take to the streets and show that we are not afraid of the extremists!"

Tunisia is considered a paragon of the Arab Spring. Despite democratic reforms, however, a mood of political frustration and economic despair still prevails, particularly among ... END_OF_DOCUMENT_TOKEN_TO_BE_REPLACED

Equality in divorce, a ban on polygamy: reformers of Islamic family law have a clear agenda. They are exploiting the ambiguity of traditional jurisprudence. By Joseph Croitoru END_OF_DOCUMENT_TOKEN_TO_BE_REPLACED

Hassan Aourid is one of the most important political and intellectual figures in Morocco. In interview with Ismail Azzam for Qantara, Aourid outlines his vision of the decline of ... END_OF_DOCUMENT_TOKEN_TO_BE_REPLACED

The Arab world is one gigantic pressure cooker. For the most part the lid of repression is on, but it is boiling over with increasing frequency. Whether in Lebanon, Iraq or in ... END_OF_DOCUMENT_TOKEN_TO_BE_REPLACED

In his new film, award-winning Tunisian director Nouri Bouzid grapples with the traumas of women held captive by Islamist extremists, victims of the so-called ʺsexual jihadʺ in ... END_OF_DOCUMENT_TOKEN_TO_BE_REPLACED