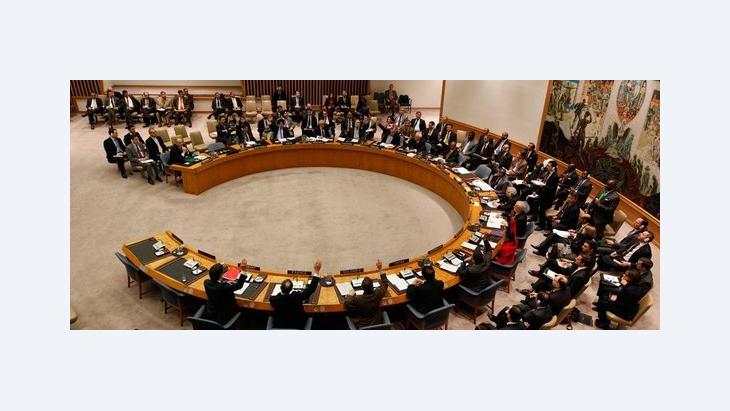 After the Veto of the UN Resolution

Syria on the Brink of Civil War

﻿Following Russia and China's veto of the UN resolution on Syria, the outlook for Syria is bleak. According to Andreas Zumach, both the harmful confrontation in the UN Security Council and the escalation of violence in Syria itself makes it seem highly unlikely that any effective help will come from outside the country

Let's imagine for a moment that the UN Security Council actually passed the resolution condemning the acts of violence perpetrated by the Assad regime last Saturday (4 February) with the support or at least the abstention of Russia and China, which both wield veto powers. Would this resolution have made any impression on Assad? Would there now even be a ceasefire in Homs and in other Syrian cities instead of the current civil war situation?

No one can say for certain. For months now, there have been many indications that the regime in Damascus cares little about international criticism of its actions and is determined to continue the violent crackdown on the opposition regardless of the consequences and even, if necessary, if it results in its own downfall.

One thing, however, is certain: the Russian-Chinese veto of the UN resolution has made Assad (even more) trenchant in his uncompromisingly brutal attitude towards the opposition. For this reason, the harsh criticism of Moscow and Peking is completely justified and necessary, at least from a human rights perspective.

Weapons for the despots

This holds, regardless of the fact that from a human rights perspective, this criticism is not very credible, coming as it does from Western governments that have themselves waged war in Iraq in recent years in blatant violation of the standards of international law and human rights and that continue to support dictatorships in the Middle East such as Saudi Arabia or the Gulf emirates both politically and with weapons because of their own oil and geostrategic interests. 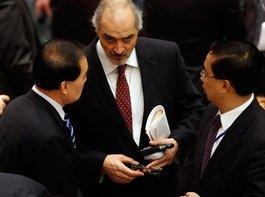 Round one to Assad's regime: on Saturday, 4 February 2012, China and Russia vetoed a UN Security Council resolution to condemn the human rights violations perpetrated by the regime in Damascus

​​However, as necessary as the criticism of the Russian-Chinese veto may be, we should be interested in why the governments in Moscow and Peking chose to vote as they did, specifically because they reveal the partial political joint responsibility of the West.

According to diplomats from both countries, the most important motive for exercising their veto was the experience of the Security Council's Libya resolution in March of last year. At the time, despite their serious reservations, both Moscow and Peking abstained, thereby allowing the resolution to pass. However, "by abusing this resolution", NATO then waged war against Libya until such time as the government was toppled. The UN Security Council, complained the diplomats, no longer had any influence on what subsequently happened. This, they said, "should not happen again" in Syria.

In addition to these reservations, Russia's own national interests played a role in its decision to veto the resolution: not only is Syria Russia's last ally in the Middle East, Russia is also Syria's biggest supplier of weapons and would like to expand its marine base on the Syrian coast.

Finally, the military and security policy elites in Moscow and Peking alike increasingly feel that the West would like to topple the Assad regime in order to weaken the Damascus-Tehran alliance in the run-up to a possible military strike against Iran.

Alliance against the "Shia axis of evil"

This view was strengthened by the fact that the members of the UN Security Council and before them the Arab League were heavily lobbied by Saudi Arabia, Kuwait and the Gulf emirates under the leadership of Qatar to pass a resolution on Syria .

Diplomats from these states – which are either predominantly Sunni or are ruled by Sunni minority governments – make no secret of the fact that their objective is not democracy and human rights in Syria, but the weakening of their Shia arch enemy, Iran. The aim is to destroy the Tehran-led "Shia axis of evil", which includes Syria, Hezbollah and Hamas.

​​All other prospects for Syria are bleak too. Both the harmful confrontation in the UN Security Council and the escalation of violence in Syria itself makes it seem highly unlikely – at least at present – that any effective help will come from outside the country.

Moscow's "diplomatic initiative" to end the violent conflict within Syria failed before Russian Foreign Minister Sergey Lavrov even touched down in Damascus. After all, Russia is not an acceptable partner or mediator in the eyes of the Syrian opposition, at the latest since the country's veto of the resolution in the Security Council.

Lavrov might have been able to impress at least parts of the opposition by announcing the immediate and complete stop of all weapons deliveries to Syria. Instead, the Russian foreign minister only sent out signals of support for Assad, at least during all his public appearances in Damascus.

Even Chinese diplomats are unable to say what is supposed to come of Peking's declared efforts to find a "political solution to the conflict". It is also unclear what contribution the planned "Syria contact group" from Western and Arab countries and Turkey could make.

The imposition of even tougher sanctions against Syria, a move being considered by the EU, is unlikely to impress Assad very much. His regime and that of his father were politically and economically isolated from the West for several decades and even from some Arab states for a time. It is used to such conditions.

The likelihood of the regime imploding is also marginal. Assad's main bastions of support are the Baath Party, the various secret services and the armed forces with over 420,000 soldiers. So far, only several thousand soldiers have deserted and some of these deserters are now fighting against the regime in the "Free Syrian Army". Assad can rely on his generals; they either come from his clan or were hand-picked for their jobs.

The generals or their relations have very close business ties with the regime. Their future depends on the survival of the regime that they are defending. This is why everything points to a further escalation of the civil war in Syria, a civil war that will last much longer and result in more deaths than was the case in Libya last year. What's more, its outcome is anything but certain.

Andreas Zumach was born in 1954 and is the taz newspaper's UN correspondent in Geneva. He is a qualified economist, journalist and social worker. His most recent book, Die kommenden Kriege (The upcoming wars), was published by Verlag Kiepenheuer & Witsch.

Since 2015 there has been a surge of interest in Syrian writing in German translation. In this series of interviews, writers, poets, publishers, and artists in Berlin talk about ... END_OF_DOCUMENT_TOKEN_TO_BE_REPLACED

In his most recent book, "Trust in Divided Societies: State, Institutions and Governance in Lebanon, Syria and Palestine", political scientist Abdalhadi Alijla writes that not ... END_OF_DOCUMENT_TOKEN_TO_BE_REPLACED

Ten years after the start of the Arabellion in North Africa and the Middle East, many view the movement as a failure. But rather than being over, it has now entered a more mature ... END_OF_DOCUMENT_TOKEN_TO_BE_REPLACED

Initial statements by the Biden administration indicate it will follow a carrot and stick policy towards Turkey. Ankara believes its role in negotiations on various issues could ... END_OF_DOCUMENT_TOKEN_TO_BE_REPLACED

Investigations by German federal prosecutors into the evidence of chemical warfare in Syria are ongoing. Deutsche Welle and Der Spiegel gained exclusive access to witnesses and ... END_OF_DOCUMENT_TOKEN_TO_BE_REPLACED

Relations between Ankara and Paris have reached a new low, with presidential communications contributing to the escalation. To describe recent bilateral exchanges as undiplomatic ... END_OF_DOCUMENT_TOKEN_TO_BE_REPLACED
Author:
Andreas Zumach
Date:
Mail:
Send via mail

END_OF_DOCUMENT_TOKEN_TO_BE_REPLACED
Social media
and networks
Subscribe to our
newsletter