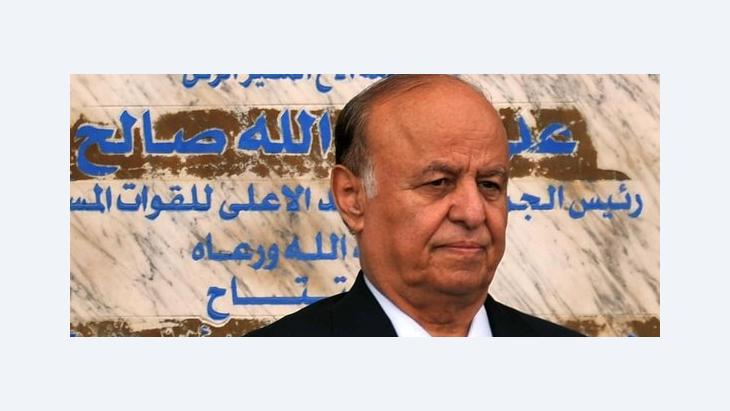 ﻿Militia in the north, separatists in the south, al-Qaeda and the return to the country of the former president Ali Abdullah Saleh ... the challenges facing Yemen's interim government on the road to democracy are staggering. From Sanaa, Birgit Svensson explains that the country's new leadership is actually fighting a war on four fronts

Does he know the new president personally? Of course he does! General Ali Mohsen is irritated by the superfluous question. He is friends with him, he adds, "very, very, very good friends, as a matter of fact." The general is almost effusive in his description of his colleague. The new President of Yemen, Abd-Rabbu Mansour Hadi, is also a military man. He is a field-marshal and served with the armed forces in the south when Yemen was still a divided country.

When North and South Yemen reunited in the spring of 1990, Hadi was one of the main treaty negotiators. He then set aside his army uniform, moved from Aden to Sanaa and was made vice president. Now he is president and has been tasked with leading Yemen into democracy. It is nothing less than a Herculean task.

The general is ensconced at the military command centre in the western part of the Yemeni capital. The area is heavily guarded. There is barbed wire, concrete blocks and sandbags all over the place. Men in uniform crawl across the dusty ground or use a rope to jump from a watchtower to the ground. 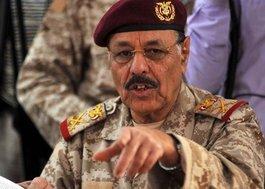 "We stand for the revolution!" Ali Abdullah Saleh's opponents have been protected by General Ali Mohsen's soldiers on a number of occasions in the past; Mohsen threw in his lot with the opposition movement in Yemen in March 2011

​​"We are training new soldiers," explains the officer at my side. General Mohsen's First Brigade needs new soldiers. Their number was decimated over the course of the five months of bitter fighting and losses. Many have moved back to the regular Yemeni army. Critics of the general, who flatly dismiss the members of his brigade as a "mob", say that these soldiers have left behind young, inexperienced recruits who would not otherwise have found a job.

"We are the youngest brigade of all," retaliates the officer, "young soldiers from all over the country." The general compares himself and his unit to Libya's National Liberation Army, which abandoned Gaddafi and sided with the protest movement. "We stand for the revolution," he says, portraying himself as the guardian angel of the young demonstrators, "to prevent more bloodshed."

There has already been quite enough bloodshed. Last year, Mohsen's First Brigade was involved in a bitter struggle with government troops. It occupied the university and set up its camp there. The general brought one-third of Sanaa under his control and threatened to take the entire city.

When the leader of the Ahmar clan, which dominates the capital, got involved in the fighting and demanded his share of the territory, the commander transformed himself into an apostle of peace and lent his support to the international community's road map for solving the crisis.

Planned reform of the armed forces

Ali Mohsen welcomes his visitors with Yemeni almonds and raisins and asks us to take a seat at a long table. He is media shy and rarely gives interviews. Mohsen played a key role in helping to topple Yemen's long-term president, Ali Abdullah Saleh, who had been in power for 33 years. He is nervous, which is an indication of how delicate the situation at the southernmost tip of the Arabian peninsula is. There is no rejoicing, no euphoria about the regime change; in fact he is extremely reserved.

Seated to his left is an advisor, who whispers in Mohsen's ear, telling him what answer to give. This man is the former director of Yemeni state television. He fell victim to the wave of revolutionary change and had to look for a new job. The general and his whispering advisor strike a conciliatory note: his renegade brigade is still part of the Yemeni army; the armed forces will be reformed over the course of the next two transition years. 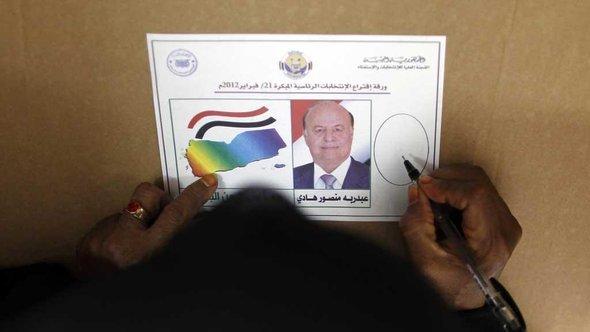 "The elections liberated Yemen from despair and gave the country hope," Yemeni President Abd-Rabbu Mansour Hadi recently told parliament. 99.8 per cent of those who cast their vote, voted for Hadi as interim president

​​What will happen to Saleh's sons, nephews and half-brothers, who either command special units or are at the head of other army units, I ask. I am particularly interested in the fate of his son, Ahmed Ali Abdullah Saleh, commander of the Republican Guard, the dreaded special unit that protects the president, who was being groomed by his father to be his successor.

General Mohsen was against it from the word go. But the General People's Congress party – the government party that has, in addition to the opposition, contributed half of the transition government's ministers, including the Minister of Defence – wants to leave the former president's son in office.

Will Mohsen agree to that, I ask. "That depends on the national dialogue, when everyone sits down together at one table," replies the general, evading the question. He goes on to point out that the new president was only recently sworn in.

Many of the mountains of rubbish that had taken over the city during the weeks of strikes and were spreading a disgusting smell were swiftly removed before the swearing-in ceremony on the outskirts of the old quarter of Sanaa. The intention was that their removal would also be a visual indication of the new beginning.

The election of Abd-Rabbu Mansour Hadi was a symbol of this new beginning. The new president told parliament that "the elections liberated Yemen from despair and gave the country hope." It was this hope that encouraged 65 per cent of the 10.2 million people in Yemen who are entitled to vote to actually go to the polls even though there was only one candidate and the election was anything but democratic.

There was no "No" box for voters to tick. Anyone who was opposed to Mansour Hadi, the consensus candidate of the ruling party and the major opposition parties, boycotted the referendum. And this is exactly what both the Shia Houthi Yemenis in the north near the Saudi Arabian border, who are fighting for an independent constituent republic, and the separatists in the south, who also want independence from Sanaa, did. As did those who were intimidated by the al-Qaeda terror network because they feared attacks, which did actually follow.

Above all in the city of Mukalla on the Gulf of Aden, people were killed both when shots were fired on the day of the election and during a suicide attack on the presidential palace in the city only a few hours after Mansour Hadi had taken his oath. In total, almost 30 people were killed. Al-Qaeda assumed responsibility for the attacks.

Al-Qaeda's operational base in Yemen

Since the attack on the US destroyer USS Cole in Aden in the year 2000, in which 17 crew members lost their lives, the Americans have been very nervous indeed. It is said that Washington reacted by sending covert anti-terror special units to Yemen to stamp out al-Qaeda. 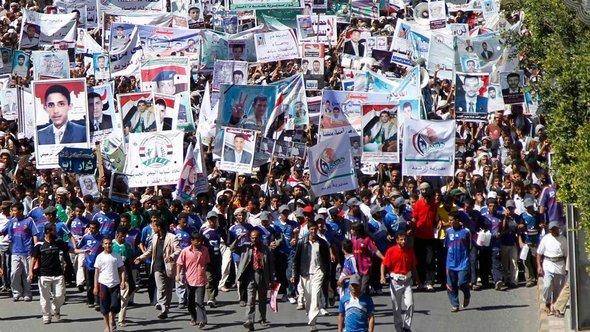 Resistance to the controversial immunity law: in Yemen, tens of thousands of demonstrators demanded that Saleh be held to account for the bloody crackdown during last year's unrest

​​Nevertheless, the organization's operational base continued to expand. There are indications that al-Qaeda now controls two provinces in southern Yemen, has set up training camps and is in close contact with the new kids on the block, the Al-Shabaab militia in Somalia on the other side of the Bab al-Mandab strait.

Barack Obama's top anti-terror advisor, John Brennan, is now accusing the renegade general of having posed a threat to the stability of the country by distancing himself from former president, Saleh. "I appeal to a number of generals – and to General Ali Mohsen in particular – to set their political agenda aside and to act in the interests of the Yemeni people," Brennan recently said during his last visit to Sanaa at the end of February.

But the general dismisses these allegations and blames Saleh and his followers for the increasing terror. He also claims that the old regime is responsible for a number of kidnappings of foreign citizens. "Saleh knew full well that he can make political capital out of this."

The fact that he himself was part of this regime for many years no longer seems relevant to the general. Mohsen, who has thus far remained calm, gets irate, straightens his glasses and speaks of a special unit to combat terrorism that has to be set up and involve the Americans. "The USA's role in fighting al-Qaeda in Yemen must become clearer."

However, political analysts in Yemen agree that the biggest challenge to a peaceful transition of power is posed by the militia in the north, the separatists in the south and al-Qaeda. There is, in other words, a battle on three fronts, each of which is incredibly complex in itself. Just a few days ago, a fourth front opened up with the return of the former president, Ali Abdullah Saleh, from the USA.

When he boarded a plane in January to seek medical treatment in New York, the general, the opposition and the protest movement thought and hoped that they had seen the back of Saleh and that the despised despot would never set food on Yemeni soil again. But before he even left the country, Saleh made it clear that he did not want to remain in exile like Tunisia's former president, Ben Ali, nor to end up in the dock like Egypt's Mubarak, nor to be lynched by his own people like Libya's Gaddafi. He quickly got parliament to rubber-stamp an amnesty and his immunity.

"He has now returned a free citizen," is how renegade Ali Mohsen comments on the return of his former boss. Has he already received death threats from the Saleh camp, I ask. "Saleh is not the only one who is out for my blood," replies the general with meaning.

Although Saudi Arabia seeks to diversify its energy sector and economy away from fossil fuels, the OPEC leader is eager to maintain its status as a fuel exporter giant by ... END_OF_DOCUMENT_TOKEN_TO_BE_REPLACED

Saudi Arabia and its allies have agreed to set aside their differences with Qatar at a summit meeting of the Gulf Cooperation Council. The restoration of diplomatic relations ... END_OF_DOCUMENT_TOKEN_TO_BE_REPLACED

Report from a disintegrating world: the early Islamic buildings of Sanaa are suffering from the effects of climate change and war. This world heritage site could be lost forever. ... END_OF_DOCUMENT_TOKEN_TO_BE_REPLACED

Ten years after the start of the Arabellion in North Africa and the Middle East, many view the movement as a failure. But rather than being over, it has now entered a more mature ... END_OF_DOCUMENT_TOKEN_TO_BE_REPLACED

END_OF_DOCUMENT_TOKEN_TO_BE_REPLACED
Social media
and networks
Subscribe to our
newsletter