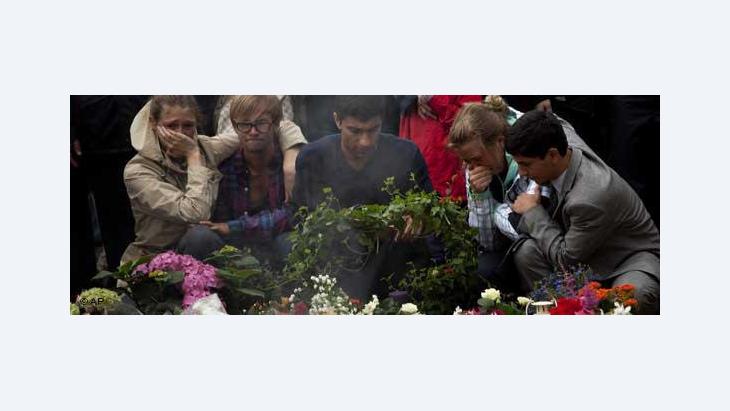 Aftermath of the Attacks in Norway

Right-wing populist politicians, bloggers and journalists have fuelled a climate throughout Europe in which a madman like Anders Behring Breivik could come up with the idea of fighting the "Muslim threat" with spectacular deeds. A commentary by Robert Misik

The right-wing populists of the Freedom Party of Austria (FPÖ) came out with an abundantly bizarre response to the Norwegian massacre. Their general secretary said that he hoped "that the exact motives and background circumstances behind the repulsive deeds will be cleared up".

In that case, the FPÖ would perhaps do well to start with itself. After all, as we are now aware, "the motives" for the deeds are precisely the kind of ideological set pieces that the Freedom Party, along with other right-wing populists such as Gert Wilders, the Cologne-based political party "Pro Köln", the Norwegian "Progress Party" and the "Swedish Democrats", along with blogs like "Politically Incorrect" and others, broadcast to the world day after day.

Anders Behring Breivik, the assassin who perpetrated the bombing in Oslo and the massacre on the holiday island of Ut﻿øya is, like them, a Christian conservative extremist and Muslim-hater. He thinks that the Western world is in danger of being overrun by Islam, is against multiculturalism and in favour of "monoculti" and regards himself as being in the middle of a war against the "global jihad".

Breivik also believes that the liberal political elites – the "cultural Marxists" – are tantamount to useful idiots in the service of Islam. This is why he chose the youth camp run by Norwegian's Social Democrats for his mass murder.

In the islamophobic morass 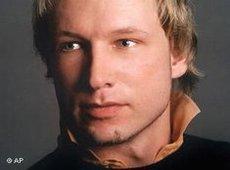 ​​Until 2006, Breivik was a member and functionary in the "Progress Party"; he posted on a wide variety of relevant Internet forums and left behind a grotesquely bloated, 1,500-page manifesto in which he basically pieces together all the fragments of "opinion" circulating in Islamophobic circles.

And the term "pieces together" should be taken literally here: he copied-and-pasted large sections of his "confessor" manifesto from entries by like-minded bloggers. This explains how several second-hand passages by Henryk M. Broder – a German anti-Muslim author whom some good burghers even today still regard as a praiseworthy writer – found their way into the text.

Anders Behring Breivik is a lone operator. He is also not least a "psycho", as the Süddeutsche Zeitung newspaper headlined its portrait of him. Indeed, what Germany's former president Richard von Weizsäcker said in 1993 after the xenophobic murders in Solingen and Mölln also applies here: "Lone perpetrators don't simply emerge from a void".

Politicians, bloggers and journalists have fuelled the kind of climate that made someone like Anders Behring Breivik possible in the first place, a climate in which he could come up with the idea that a "mere" political or journalistic fight against an imagined elemental Muslim threat is no longer sufficient. 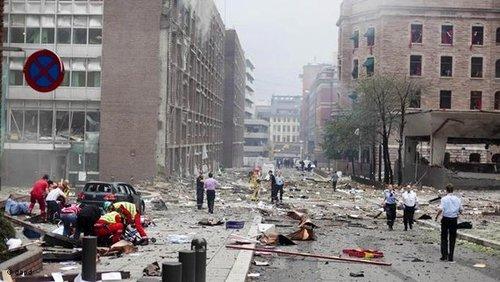 The massacres in Oslo and on the island of Utøya mark a watershed: while the anti-Islamic mood previously led at most to bullying and violence against individuals, it has now for the first time sparked mass terrorism

​​It is like an absurd mirror image: whatever they have accused normal Muslims of doing – e.g. of being "somehow responsible" for the violent acts perpetrated by Islamist terrorist sects – they have now done exactly the same thing, these lunatics who have had such nonsense put in their heads that they are prepared to take countless human lives. They who are always quick to point the finger and accuse others of "intellectual complicity" have now become intellectual accomplices in a much, much more direct way.

Will that fact at least prompt some rethinking in this milieu? The unbelievably callous advice given on the "Achse des Guten" (Axis of Good), the community blog shared by Broder and friends, is that one should now turn one's attention to other matters, "rather than speculating about the pseudopolitical ravings of a perverse killer".

On "Politically Incorrect", more or less the central organ of the Muslim-haters, the tone during the first shock was more contemplative: "What he writes are for the most part things that might also be found in this forum". This statement is then followed by speculation as to whether the man who, as far as they are concerned, had written some quite reasonable stuff "is perhaps suffering from a mental illness that has since then gotten worse?".

But does the Islam critics' self-exculpation by pathologising the offender really work? It goes without saying that a man like Breivik – a man who gets caught up in the idea of contemporary "crusades", who sees himself as a "one-man army", who carries out an atrocious, spectacular deed that claims the lives of nearly one hundred fellow human beings merely to spread his opinions, i.e. who literally perpetrates a massacre as a marketing campaign – cannot be right in the head.

He is certainly a lunatic in a much more maniacal way than someone who day in, day out bangs out texts on the computer until his fingers ache, who warns in blogs of a "demographic jihad" and sees the crescent moon rising over Germany. But it's not simply as if there were a huge gulf separating the "lunatic" extremist from the "reasonable" extremist, the one healthy, the other sick.

The truth is that even "normal" extremism draws its life blood from paranoia: the paranoia that we are all surrounded here in the West by Muslims who are only waiting for an opportune moment to cut our throats; the paranoia that leads to tunnel vision and a persecution complex. Just because the total paranoiac becomes a murderer does not by any measure make the "normal" paranoiac reasonable, or at the very most in an extremely relative way.

The massacre of Oslo and Ut﻿øya marks a watershed: while the anti-Islamic mood had previously led at most to bullying and violence against individuals, it has now for the first time sparked mass terrorism. 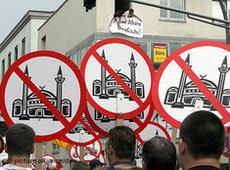 Paranoia as a political agenda: right-wing populist organisations and parties such as "Pro Köln" have been systematically inciting hatred against Muslims for years and warning of the foreign infiltration of Europe

​​The days of trivialisation are over. In the past few years, right-wing populists in various European countries have not only risen to become heavyweight political players – an ascent they owe primarily to the fomenting of anti-Islamic resentments – they have even come to be increasingly regarded as a "respectable" force, as somewhat radical, yes, but nonetheless basically "normal" political powers.

Due to 9/11 and in view of the changes immigration has brought to our societies, anti-Islamic resentment has not only become more widespread, but also more widely accepted. Radical lunatics have enticed normal citizens into their orbit, citizens who, although they do not embrace the postulates of the Muslim-haters, do share some of their views and tolerate even the most bizarre statements on their part. Thoroughly respectable newspapers have given them space to explain their positions.

The milieu of the angry right-wing conservative citizen

In short, our social immune defences have broken down. While security services and the German Federal Office for the Protection of the Constitution are busy investigating Muslim scenes, left-wing radicals and the old Neo-Nazi circles, they have overlooked the increasing radicalisation of the milieu of the angry right-wing conservative citizen. And this despite its visibly growing rancour against multiculturalism, foreigners, Muslims and everything that is different, and despite the increasingly misanthropic language being used, with people complaining about "Hinternhochbeter" (literally, those who pray with their bottoms in the air) and "sheep molesters".

After the massacre, the intellectual incendiaries will now try to lay low for a while; they will expound at length about how they have nothing to do with the deed of such a "madman"; they will try to steal away unnoticed. We shouldn't let them off so easily.

Home
Print
Newsletter
More on this topic
Interview with Kay Sokolowsky: Racism Dressed Up As Criticism of IslamFresh Dispute over Islam: Why the German Media are Courting the Anti-Islam Movement
Related Topics
Islam and the West, Islam in Europe, Islamophobia
All Topics

Berlin's annual Human Rights Film Festival closed at the weekend. One entry to the festival was the documentary "Captains of Zaatari". Its Egyptian director Ali El Arabi focuses ... END_OF_DOCUMENT_TOKEN_TO_BE_REPLACED

The world must take action now to prevent a deep and lasting humanitarian crisis in Afghanistan. But what, if anything, can be done? The one billion dollars pledged by ... END_OF_DOCUMENT_TOKEN_TO_BE_REPLACED

Germany's foreign policy is explicitly values-based. But what happens, Ralf Bosen asks, when democracy, the rule of law and human rights collide with the logic of trade and ... END_OF_DOCUMENT_TOKEN_TO_BE_REPLACED

No other Western poet was arguably so well-versed in the Koran or so fascinated by Islam as Germany's national hero, Goethe. In a new publication that examines all Goethe's ... END_OF_DOCUMENT_TOKEN_TO_BE_REPLACED

A deluge of books, movies, series and cover stories: ever since the events of 9/11, the West has seemed almost manically preoccupied with Islam. Yet this has rarely led to deeper ... END_OF_DOCUMENT_TOKEN_TO_BE_REPLACED

Twenty years after 9/11, the world is faced with the dual challenge of Islamophobia and anti-Westernism. Ahmet Kuru argues that Muslims in the West, well versed in both Western ... END_OF_DOCUMENT_TOKEN_TO_BE_REPLACED
Author:
Robert Misik
Date:
Mail:
Send via mail

END_OF_DOCUMENT_TOKEN_TO_BE_REPLACED
Social media
and networks
Subscribe to our
newsletter