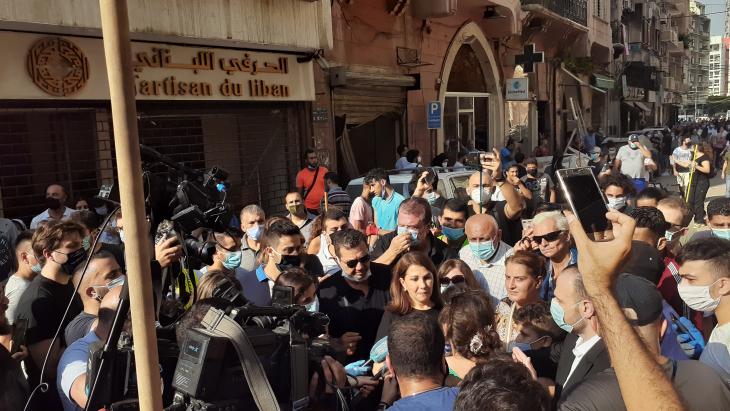 Aftermath of the Beirut explosion
"Revolution is born out of suffering"

Following the explosion in the port of Beirut, the Lebanese are united in their anger with the politicians. Volunteers are sweeping up broken glass and removing rubble and stones from houses. While the political scene is trying to sort itself out, it is the Lebanese people who are rebuilding the country. Julia Neumann reports from Beirut

Under the balcony of a pale yellow house with white arches, Sabine Soueidy stands next to a pile of rubble and bricks. "There is a saying: Beirut has been brought to its knees many times. I think it is now the eighth time, but we are rebuilding it ourselves," says the 23-year-old political science student. Since the early hours, she and other volunteers have been clearing the house of rubble, ashes and the remains of walls. It is one of the oldest houses in the Mar Mikhael district of Beirut, otherwise known as an entertainment quarter. "The house belongs to an old woman and her grandchildren, who had just finished renovating it," says Soueidy.

Her anger is directed primarily at Lebanon's political elite. "We are watching as the government fails, and it is therefore up to us to take over its duties. Who else is going to clean up Beirut?" she asks, furious.

On 4 August at 6:08 p.m., 2,750 tons of ammonium nitrate exploded in the harbour area of Lebanon's capital. Over 150 people lost their lives, 6,000 were injured, and some 250,000 lost their homes within the space of a few seconds. Relatives and rescue teams are still searching for missing persons.

Window panes burst and the broken glass is now scattered everywhere, while chairs, picture frames and flower pots were catapulted onto the street by the shock wave. Inside homes, doors are resting on beds and shutters are piled up on top of boards, the remains of walls, clothes and other belongings. Poorer areas such as the Armenian quarter and the apartment houses in Karantina, directly adjacent to the port, were heavily affected by the blast, but also gentrified districts including Gemmayze, Aschrafie and Mar Mikhael, known for their stately mansions, hip bars and chic restaurants. 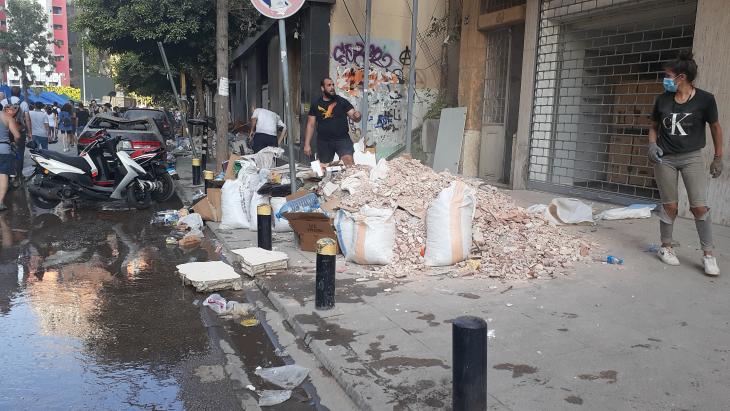 Parts of Beirut lie in ruins: the Lebanese are mainly dependent on themselves for the clean-up work, but a strong will to survive helps the people even now. "There is a saying: Beirut has been brought to its knees many times. I think it is now the eighth time, but we are rebuilding it ourselves," says 23-year-old student Sabine Soueidy

The long street leading through Mar Mikhael, once a popular nightlife destination, was closed the day after the explosion. It is just 600 metres as the crow flies from the warehouse where the ammonium nitrate detonated. Broken glass is everywhere, a woman is moving a chest of drawers from the sidewalk back into her clothing boutique, and in a jeans shop employees are knocking dust off the merchandise. At a bank branch, workers can be seen lifting entire panels of broken window panes out of their frames.

A little further down the street, Tawfik Abu Khalil sweeps the broken glass into a pile and then dumps it in a bucket. The 78-year-old supplies restaurants with air conditioning units and kitchen appliances. The shock wave demolished many of the appliances in his shop. He estimates the damage at around 47,000 euros. "I'm just fixing up the store to sell it, and then I'm leaving," he says. Before the explosion happened, Abu Khalil was planning to fly to Canada to visit his five children and then return to Lebanon. But now he has changed his plans and wants to leave the country for good. "What is left for me here?" he asks angrily.

"The government is responsible for the disaster"

Even before the explosion, the people of Lebanon were already suffering under the coronavirus pandemic and the economic crisis. Thousands have lost their jobs and the Lebanese pound has dropped in value around 80 percent. Now there is fear of a food shortage. Lebanon is dependent on imports of wheat, petrol and medicine, and 60 percent of imports arrive in the country via the port of Beirut. The explosion destroyed warehouses holding wheat and medicine, and now there is a huge crater in the ground measuring 200 metres in diameter.

And yet the dangerous cargo was never intended for Beirut in the first place. In autumn 2013, the ship Rhosus sailed with its volatile freight from Georgia to Mozambique, but it was delayed in Beirut due to multiple deficiencies. The material for making explosives had thus been stored at the port of Beirut since 2014 – without the proper security precautions. The ship's former captain, Boris Prokoshev, said that the Lebanese authorities were "most definitely" aware of the dangers of the cargo. "The government in Lebanon is responsible for the disaster," he told the AP news agency.

Saad Hariri, who was Prime Minister from 2016 to 2019, has laid the blame for the explosion on the government that succeeded him, in office since January 2020. The latter in turn has had 16 employees of the port arrested. Customs officials called attention to the hazards several times, but why nobody acted is unclear. Possibly it is because the port and the customs authority are among the most corrupt and lucrative institutions for the political elite. A number of different groups, politicians and Hezbollah hold sway there.

Hundreds of thousands took to the streets last autumn to protest this government mismanagement.  They censured their politicians for clientelism and corruption, calling for a revolution. People are fed up with the old elite that has been clinging to power since the end of the civil war 30 years ago. Prime Minister Saad Hariri is said to have given a South African fashion model a gift amounting to some 13.5 million euros while his people were dealing with power cuts and were forced to purchase expensive generators to secure their electricity supply. The national electricity company is running an annual deficit of almost 1.7 billion euros. Even before the crisis, power was out for at least three hours a day.

And now, the people of Beirut are facing the loss of their memories, destroyed homes, trauma and grief. This is once again rekindling the public's anger. Minister of Education Tarek Majsub (who has since resigned) appeared on Friday (7 August) with a broom to help sweep up debris, but people greeted him with demands for his resignation.

In the shattered Gemmayze district of Beirut, the singer Majida Roumi was greeted by many with tears in their eyes. The 64-year-old proclaimed before a crowd of helpers and journalists that she found the solidarity they were demonstrating inspiring, and pronounced: "Revolution is born out of suffering."

That line comes from her famous song "Beirut, sitt el dunia" ("Beirut, loveliest diva in the world"). On 1 August, three days before the explosion, Roumi sang her anthem to Beirut at a virtual memorial celebration for the Lebanese army. But the sentence was censored, and her choir had to sing la la la instead. In the street, the singer reiterated that the line could never be expunged "because it expresses what people feel". 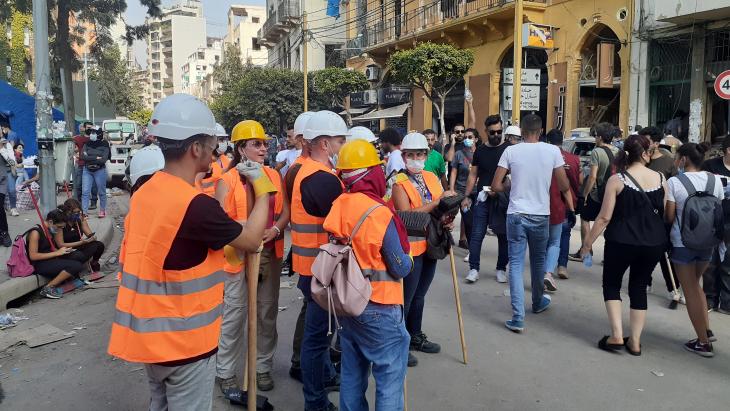 Volunteers carry out clean-up work in the Gemmayze district of Beirut. The former trendy district was hit hard by the explosion. Now it is Lebanese citizens who are clearing away rubble, removing remnants of walls and collecting the broken glass lying around, while the military and police remain largely inactive

Last Friday evening, 40-year-old Dania Baidoun could be found standing in the street clad in an orange high-visibility vest singing Roumi's song at the top of her lungs. "All of this could only happen because the government is corrupt, just like the ones before it," she said. "They will not let us live in peace. The politicians should know that they have to go. They will leave Lebanon, but we will stay." Baidoun is the mother of five children. She brought her children and relatives along to Beirut from Saida in the south to lend a hand.

Solidarity is everywhere these days in Beirut. A woman cooks meals every day and brings them to one of the many tents that helpers have set up. Volunteers are coordinating clean-up efforts, providing psychological counselling, and searching for missing persons. And architects are inspecting the damaged houses, asking people what they need and vowing to make sure that inhabitants are not displaced by the state when it comes time for reconstruction.

The people who are now taking spades and shovels in hand to clean up streets and homes are infuriated with the government, whose military and police are standing idly by. "We need to repair both: our homes and the system," was the message in a WhatsApp group coordinating relief efforts. Many people congregated on the central Martyr's Square in downtown Beirut last weekend, brooms in hand, to protest.

They made hangman's nooses from wood and rope and demanded justice for the victims of the explosion, calling for the government to step down. The political science student Soueidy is not just cleaning up either. She wants to keep protesting until political change finally comes. "We will fight until we get what we want."

Home
Print
Newsletter
More on this topic
Interview with Lebanese political scientist Bassel Salloukh: Will a new Lebanon arise from the ashes of Beirut?Aftermath of the Beirut explosion: Lebanon, a state in freefall thanks to corrupt governanceQantara dossier: Lebanon
Related Topics
Arabellion, Armenians, Confessionalism, Democracy and civil society, Hezbollah, Saad Hariri
All Topics

Food prices doubled, salaries halved, banks restricting withdrawals: Egyptians now have the same problems as the Lebanese. But if things get worse here, the fallout will be far ... END_OF_DOCUMENT_TOKEN_TO_BE_REPLACED

Lebanon was long viewed as the Switzerland of the Middle East. Until relatively recently, billions were deposited in its banks. Gulf states were among the foremost investors in ... END_OF_DOCUMENT_TOKEN_TO_BE_REPLACED

November 2022 sees the Arab world firmly in the spotlight with the COP27 in Egypt and the FIFA World Cup in Qatar. Public trust in MENA governments is weak, thanks to their ... END_OF_DOCUMENT_TOKEN_TO_BE_REPLACED

"You are not my guide... I am the compass. Iranian women have spoken, freed themselves, and unleashed a revolution despite smelling death. They have cut their braids in anger; ... END_OF_DOCUMENT_TOKEN_TO_BE_REPLACED

In “The Wrong End of the Telescope”, Rabih Alameddine draws us away from the headlines and into the personal story of one individual. Mina is complex, compelling and very real. By ... END_OF_DOCUMENT_TOKEN_TO_BE_REPLACED
Author:
Julia Neumann
Date:
Mail:
Send via mail

END_OF_DOCUMENT_TOKEN_TO_BE_REPLACED
Social media
and networks
Subscribe to our
newsletter