"Decor," the latest film by the Egyptian director Ahmad Abdalla, is a tribute to the narrative power of cinema and to the eternal themes of freedom, love, and constraint. Christopher Resch watched the film

Ahmad Abdalla is one of the most exciting young film-makers in Egypt. This is because his audiences can never be quite sure what he is about to offer them. After his successful underground dramas "Heliopolis" (2009) and "Microphone" (2010), he made a radical about-turn with "Rags and Tatters" (2013) by directing a calm, almost experimental film from the fringe of the Egyptian Revolution.

With "Decor" (2014), Abdalla has made the transition from independent director to big-budget player. Instead of a crew of eight or nine, he had team of almost a hundred working on the set. The film reflects the opportunities provided by the extra finances.

So, is it a radical departure? No. "Decor" is a (successful) reflection on the freedom to decide. What does a director do when given complete freedom? What do film characters do when such freedom is missing? When external constraints demand decisions that surpass the wherewithal of an individual life?

Maha (Horeya Farghaly), the protagonist, is a successful film set designer. She is a career woman, childless by choice, who together with her handsome partner Sherif (Khaled Abol Naga) designs the sets of a mediocre B film. Maha is a perfectionist, yet the tremendous time pressure in the commercial film business means her work brings her more stress than pleasure. Suddenly, the camera pans and Maha is transported into the film within a film, living the illusion that she is the wife of a loving, but boring husband (Maged El Kedwany) and the mother of a rebellious daughter.

Between reality and illusion

Abdalla introduces this sudden change very skilfully, portraying both worlds in soft, almost dream-like monochrome.  Soon the viewer loses a sense of certainty as to which world is the real one and which the illusion – in one the successful, but stressed career woman and, in the other, a loved, but unhappy mother. A shrewd psychological tenet serves as our constant guide, showing that the issues in both worlds are interlocked: are the three characters truly happy with the decisions of their past? 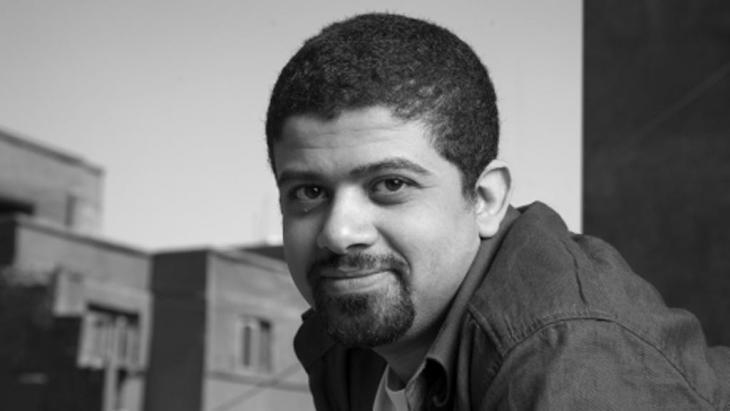 "With "Decor" (2014), Abdalla has made the transition from independent director to big-budget player. Instead of a crew of eight or nine, he had team of almost a hundred working on the set. The film reflects the opportunities provided by the extra finances," writes Christopher Resch

Ahmad Abdalla allows his characters to revolve around major themes – such as the role of women in modern society, the influences of the world outside (a curfew is in force), and the compatibility of work and family life – without being forced to decide on a position. This functions well, even when not every shift in the 116-minute-long film succeeds in moving the narrative forward, at times taxinf the patience of the audience.

Nonetheless, Abdalla has filmed a brilliantly staged auteur work with "Decor," a film that also pays homage to female characters in Egyptian cinema. Constantly running in the background are clips from films featuring Faten Hamama, the great Egyptian actress who passed away in January 2015. Maha, the protagonist of "Decor," is infatuated with Hamama's films, perhaps serving as a metaphor for her desire to be similarly strong and free.

Up on the stage of the Berlin Alfilm Festival, Khaled Abol Naga smiled, having expected the question about a cinematic metaphor. "To be honest, we are playing with the audience in the film," says the 48-year-old film star. "If you see a metaphor here, then so be it. Every viewer has their own ideas."

In this sense, as well, "Decor" proved to be a good choice to open the 6th Alfilm Festival, as it offered the festival the opportunity to explore a whole range of thematic directions. Women occupy a large place in this year's retrospective as well, focusing on the work of the Egyptian actress Yousra, one of the best-known contemporary Arab actresses.

Sisi’s mismanagement has plunged the country into crisis. Both political and economic reform is needed to save it, writes Abdelrahman Mansour END_OF_DOCUMENT_TOKEN_TO_BE_REPLACED

The devaluation of the Egyptian pound combined with rising food prices is taking its toll on Egypt. More and more people are slipping into poverty. Karim El-Gawhary reports from ... END_OF_DOCUMENT_TOKEN_TO_BE_REPLACED

Egyptian Sufis have been on the defensive against the country's Islamists for decades. Meanwhile, interest in mysticism is growing among the young members of Cairo’s middle and ... END_OF_DOCUMENT_TOKEN_TO_BE_REPLACED

Abortions are illegal in Egypt unless they are necessary to save a married woman's life. But that doesn't stop local women from having one. Egyptian society needs to acknowledge ... END_OF_DOCUMENT_TOKEN_TO_BE_REPLACED

Food prices doubled, salaries halved, banks restricting withdrawals: Egyptians now have the same problems as the Lebanese. But if things get worse here, the fallout will be far ... END_OF_DOCUMENT_TOKEN_TO_BE_REPLACED

END_OF_DOCUMENT_TOKEN_TO_BE_REPLACED
Social media
and networks
Subscribe to our
newsletter