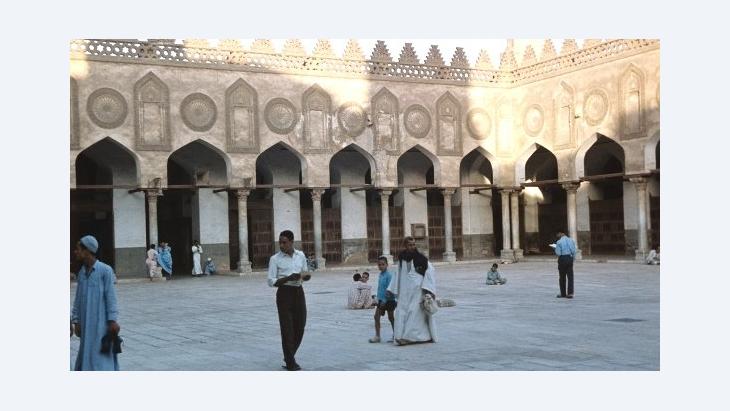 The spread of extremism in Muslim societies in the past century can be attributed to a largely overlooked trend: the demise of religious institutions that once had global reach. Focusing on Egypt's Al-Azhar university, Hassan Hassan takes a look into the matter

Moderate, diverse and transnational learning centres became localised and inward-looking because of momentous events such as the abolition of the caliphate system in Istanbul, the occupation of Jerusalem, the monopoly of Wahhabi ideology in Mecca and Medina, the dominance of the Khomeini doctrine in Qom and the weakening of the Najaf learning centre by Baathists and Khomeinists. These institutions have in many ways lost their religious global reach and yielded to provincialism.

Al-Azhar University in Egypt, Sunni Islam's highest seat of learning and arguably the last bastion of pan-Islamic rationalism, appears to be facing a similar fate.

The new Egyptian constitution, approved in a popular referendum in December, has granted Al-Azhar a codified independence and consultative powers over whether certain laws or policies are Sharia-compliant. But, ironically, these provisions will prove to be to the detriment of Al-Azhar's global appeal and religious moderation by dragging it into local political bickering and religious rivalry. 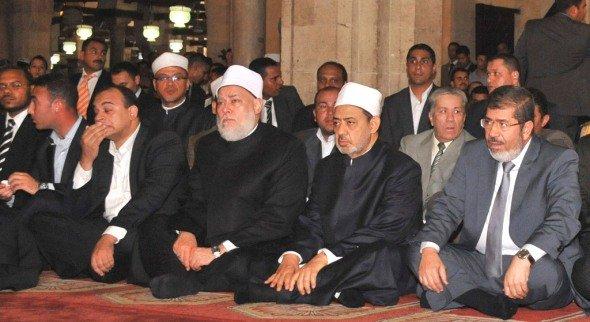 "Yielding to provincialism": Egypt's new constitution has officially annexed Al-Azhar into the political system. Before the revolution, Al-Azhar was an Egypt-based Islamic institution that could be presided over by non-Egyptians

​​The constitution has officially annexed Al-Azhar into Egypt's political system and made it an Egyptian institution, instead of an Egypt-based Islamic institution that could be presided over by non-Egyptians, as was the case before when even the head of the centre could be a non-Egyptian. "Independence" does not mean sovereignty or immunity from takeover.

Since it was established by the Fatimids in 972 to promote Ismaili doctrine, and then turned to a university three years later, Al-Azhar has been involved in Egyptian affairs under the watchful eyes of the state. Abbas Hilmi, the last Khedive of Egypt, demanded that Al-Azhar refrain from political activism, "riots" and "chaos of thought", and instead dedicate itself to "useful religious knowledge because it is a religious institution above all".

The first time Al-Azhar was officially integrated into the state was after the 23 July Revolution of 1952 that overthrew the Egyptian monarchy, when its work and finances were legally regulated. Gamal Abdel Nasser instructed Al-Azhar to "mobilise the public in all Islamic countries against Israel and the colonisers".

But despite such political interference, no previous leaders or occupiers sought to overhaul its basic doctrine, which endured since the institution adopted Sunni doctrine in the 12th century. Early Muslim rulers – Ayyubids, Mamluks and Ottomans – either shunned Al-Azhar or did not interfere in its education system.

The situation is different now with the rise of Islamists in Egypt. Religious groups are likely to take over the centre and impose their own ideologies to bolster their political and religious standing. Since the new constitution was approved, there have been reports of such attempts. In a video released in December, Sheikh Yassir Al Borhami, the deputy leader of Egypt's Salafi Calling movement, revealed a plot to oust Al-Azhar's chief sheikh constitutionally. 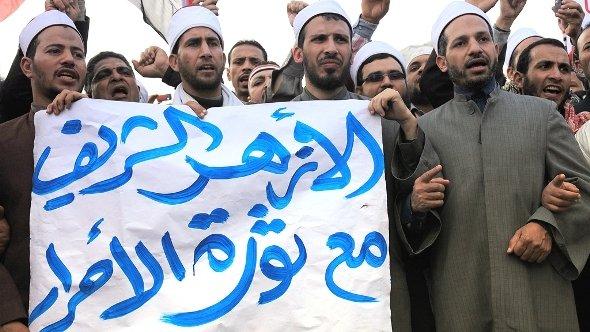 "A truly rationalist and moderate school": If extremist ideologies take over the institution, they are likely to tamper with its curriculum, which would have global implications, Hassan Hassan writes

​​There were also reports that a leading member of the Muslim Brotherhood, Abdulrahman Al Barr, was among a list of nominees for the post of Grand Mufti earlier this month; although the Dar al-Ifta institute the Grand Mufti heads is a separate institution from Al-Azhar, the post would be an important gain for the Brotherhood within the vast Egyptian religious establishment and subsequently towards a potential takeover.

The religious establishment in Egypt, which includes Al-Azhar, the Ifta institute and the Ministry of Awqaf in charge of religious endowments, is largely hostile to the Brotherhood and Salafists. But while they currently can resist attempts of takeover by hardline groups, that is likely to change with time.

Staunch advocates of tolerance and dialogue

The Al-Azhar institution, however, is simply too important to fall in the hands of extremists. The university has branches in the United States, United Kingdom, Indonesia, India, Pakistan, Malaysia, Somalia, Sudan, Palestine and Kuwait. And Azharite communities exist throughout the Muslim world, from Mauritania to India, and have been staunch advocates of tolerance, coexistence and dialogue. Al-Azhar ascribes to the Asharite school, a religious doctrine that was responsible for rationalising Islamic theology in the 10th century.

Because globally Asharites are not organised, Al-Azhar's role in Egypt will likely weaken its branches and communities in other countries, making them susceptible to local influences. Wahhabi and Salafi ideologies are already spreading fast across the Muslim world, in tandem with the rise of Islamists in politics in several countries in the Middle East. Azharite communities, in countries where a power shift is taking place such as Syria, are also likely to be overshadowed by Salafist-leaning clergy.

Al-Azhar traditionally has been an antidote to fundamentalist and sectarian trends, in Egypt and elsewhere. For decades, "moderate Islam" was attributed to groups such as the Muslim Brotherhood, but true moderation is represented by fundamentally rational institutions such as Al-Azhar. The Muslim Brotherhood and its allies do not ascribe to an ideology that upholds moderation and rationalism ideology that upholds moderation and rationalism.

The trend of provincialism among Islamic institutions

The Brotherhood, for example, is essentially a strand of Salafism, which is pragmatic only in its tactics; its susceptibility to extremism, fundamentalism and sectarianism is clear. Many committed members of the Brotherhood hold extremist and sectarian views, and groups affiliated with it have endorsed violence as a political strategy. 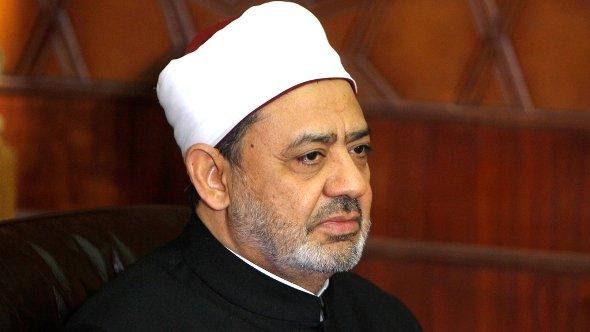 Ahmed Muhammad Ahmed el-Tayeb is the current Grand Imam of Al-Azhar and president of al-Azhar University. He was appointed by Hosni Mubarak in 2010. He is considered to be one of the most moderate Sunni clerics in Egypt

​​Al-Azhar, on the other hand, is a truly rationalist and moderate school. If extremist ideologies take over the institution, they are likely to tamper with its curriculum, which would have global implications: the Asharite school has played a significant role in curbing extremism in Islamic societies for centuries.

What makes the eclipse of Al-Azhar a deeply worrying possibility is that it is part of a wider trend, along with the rise of religious extremists. Mecca and Madina used to be places where Muslims exercised tolerance and coexistence through tutoring circles that represented all schools of thought; they are now exclusively Wahhabi requiring strict compliance with that definition of pure Islam.

A similar transformation has occurred in Najaf, Qom, Damascus and other learning centres. Jerusalem once was a centre where Muslims from across the spectrum worshipped together, with members of other faiths. These centres have now retreated to their locales and are subject to local politicking and narrow religious understandings.

This trend of provincialism among Islamic institutions has created a profound religious crisis that is likely to deepen if the institutions continue to lose their global reach. And yet little has been done to prevent or compensate for their demise.

﻿Hassan Hassan is a columnist for The National newspaper in Abu Dhabi, the UAE, and a contributor for The Guardian, Foreign Policy and Carnegie Endowment. He graduated from the University of Nottingham, the UK, with MA in International Relations.

Since President Abdul Fattah al-Sisi seized power in Egypt in 2013, he has ruled the country with an iron fist. Civil society, opposition and free press struggle to survive. Tens ... END_OF_DOCUMENT_TOKEN_TO_BE_REPLACED

The lack of grain supplies from Ukraine is forcing Egypt to act. Now even the Toshka project is being revived to grow grain in the desert. Birgit Svensson travelled to see it END_OF_DOCUMENT_TOKEN_TO_BE_REPLACED

In this unusually beautiful book of images and text, published in German and Arabic, artist Marianne Manda presents her own unique take on the megacity of Cairo. In over fifty ... END_OF_DOCUMENT_TOKEN_TO_BE_REPLACED

A stage, lights, a mesmerised audience: it looks like an Egyptian folkloric concert, but Umm Sameh is singing to heal the sick by driving out the demons that possess them END_OF_DOCUMENT_TOKEN_TO_BE_REPLACED
Author:
Hassan Hassan
Date:
Mail:
Send via mail

END_OF_DOCUMENT_TOKEN_TO_BE_REPLACED
Social media
and networks
Subscribe to our
newsletter