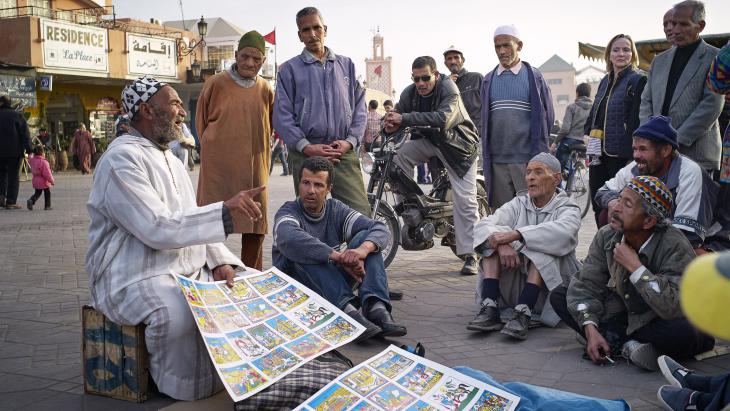 The art of storytelling has always been part of Arab culture. Yet it is a tradition with an uncertain future. Filmmaker Thomas Ladenburger's exploration of the world of Moroccan storytellers provides a fascinating insight into the intangible cultural heritage of humanity. By Melanie Christina Mohr

Ever since he was ten years old, Abderrahim El Makkouri has spent much of his time on Djemaa el Fna square, the pulsating, vibrant centre of magical downtown Marrakesh. He tells his stories to the halqa – the listeners who gather round to hear tales passed down by generations of storytellers, stories that bring together and perpetuate the traditions and the magic of Morocco.

In May 2001, UNESCO honoured this cultural tradition and helped consolidate its preservation when it proclaimed the creative activity on Djemaa el Fna as a "masterpiece of the oral and intangible heritage of humanity". The lack of institutional structures, however, means that such traditional art forms in Morocco, as in many other countries, are in a rather precarious situation.

"Young artists are no longer willing to settle for just a few dirhams," explains Abderrahim El Makkouri. "Like everywhere else, life in Morocco is changing fast. Everything has changed. In my day, we were satisfied with simple meals – what's wrong with lentils anyway?" He laughs. "The young ones nowadays just want to spend all their time loafing around in restaurants. And if this country doesn't come to its senses soon and give active support to storytelling, there will soon be no more Moroccan storytellers on Djemaa el Fna square."

"This is not about storytelling for tourists. Most of them don't speak Arabic in any case." The storytellers of Djemaa el Fna often rattle off their tales at tremendous pace, but it is always in Moroccan dialect, intended for a local audience that is willing to gather night after night in the illuminated square, eagerly awaiting the next installment of the previous day's story.

Filmmaker Thomas Ladenburger travelled to Morocco in 2000. His interest in the diversity and richness of Arab literature had been aroused during an earlier project and with it his fascination with the storytellers. Over the following one and a half years he accompanied storytellers such as Abderrahim El Makkouri, one of the last of his breed. The resulting film transports its audiences into the intimate world of a family relationship, between El Makkouri and his son, linked by the storyteller's art and the family narrative, the inheritance to be passed on from father to son.

The filming took some time. Thomas Ladenburger quickly realised that it would require patience and the trust of the halaiqis if he was to bring the world of the halqa of Djemaa el Fna to a larger audience. 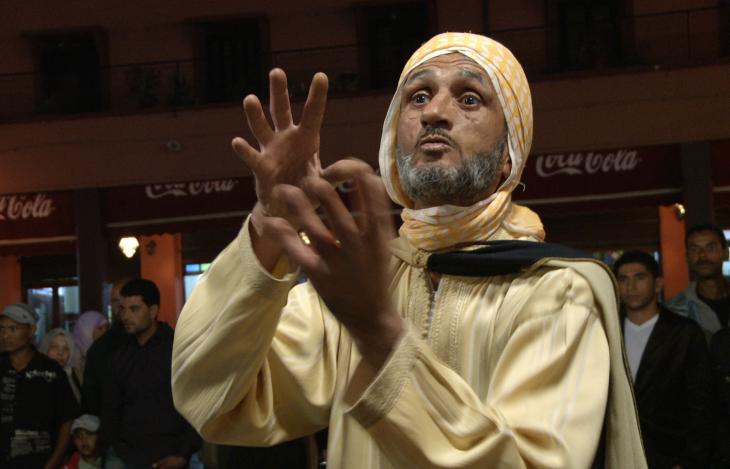 Tradition swathed in the magic of Morocco: ever since he was ten years old, Abderrahim El Makkouri has spent much of his time on Djemaa el Fna square, the pulsating, vibrant centre of magical downtown Marrakesh

"I wanted to take advantage of the opportunity," says Ladenburger. "Luckily, I had a sound man from Casablanca, an amazing guy, who not only did the recording, but was also able to translate. We were a small team, just three of us in all. Later, I began filming others along with the storytellers, trying to capture the diversity of the performers in the square, their vitality and the passion of their performances.

For Thomas Ladenburger, the Jemaa el Fna is the ″essence of Moroccan culture″: ″when you plunge into a halqa, you will emerge at an entirely different point in the country. Each halqa relates to a particular saint, and each of these saints is represented by a marabout (a Muslim religious teacher from the mystic tradition), somewhere in Morocco. There are very strong links, therefore, between the different parts of Morocco and the various halqas on the Djemaa el Fna – I found this interesting and it inspired many of the portraits in the film."

One of these fascinating portraits tells the story of a halaiqi who earns his living dancing in women's clothes to the sound of the violins.

In addition to the impressive documentary film "Al Halqa - the Last Moroccan Storytellers" and a successful exhibition last autumn at the Ethnological Museum Dahlem in Berlin, Thomas Ladenburger has also created a virtual museum as an attempt "to create, or preserve a collective memory and invite people to tell their own stories and share them with others on the Internet."

With the help of stunning photographs and a rich repertoire of well-chosen audio and film material on the history of the square, the filmmaker has succeeded in opening a virtual door on the Moroccan art of Djemaa el Fna to a wide audience.

″Look here: this is Moroccan culture!″

It was important to Ladenburger that his film should highlight the significance of both the art and the artists. "People need to understand that storytelling is an important part of cultural heritage," Ladenburger argues.

"While I was filming, I became aware that storytelling was not being given recognition as an art form by the majority of the Moroccan population. Not at a higher level at least. The intention behind my project was to provide a context, for the halaiqis in general, and the storytellers in particular, and to emphasise the value of what they do."

Storytelling is not just telling stories. It is an art, one that requires practice, perseverance and passion. "The first stories I heard were told to me by my grandmother," Abderrahim El Makkouri recalls.

"My daily route to school as a child took me across Djemaa el Fna square. I got to know the storytellers and learned other stories, stories about love and adventure and magic that were longer than those my grandmother had told me. I was fascinated and decided I had to learn the stories of the oldest storytellers on the square. My head was filled with stories when I was young. I wasn't interested in money. More than anything else, I wanted to make a name for myself on the Djemaa el Fna and to hold my own against the long-established halaiqis. I remember travelling all the way to Fez to listen to a storyteller and learn his story by heart, because I had heard that it was a story that no one could resist. That was the lucky break; it gave me my place on Djemaa el Fna square and it turned me into a storyteller."

Her grandparents are Jews – born in Tunisia and Algeria. Director Cleo Cohen has now broken the silence about this with a very personal debut. By Nadine Wojcik END_OF_DOCUMENT_TOKEN_TO_BE_REPLACED

Moncef Marzouki was Tunisia's first democratically elected president after the fall of dictator Ben Ali. Today he is the most prominent critic of increasingly counter- ... END_OF_DOCUMENT_TOKEN_TO_BE_REPLACED

Moroccan sociologist Fatima Sadiqi believes that women's movements in North Africa have changed over the past ten years. Today, women from all social classes are fighting together ... END_OF_DOCUMENT_TOKEN_TO_BE_REPLACED

In her latest novel, Catalan-Moroccan writer Najat El Hachmi tells the story of a young migrant woman struggling to balance her desire for freedom and the demands of tradition and ... END_OF_DOCUMENT_TOKEN_TO_BE_REPLACED

The memory of experienced injustice plays a central role in the transformation of societies towards democracy. In the Arab world, the critical study of memory is only just ... END_OF_DOCUMENT_TOKEN_TO_BE_REPLACED
Author:
Melanie Christina Mohr
Date:
Mail:
Send via mail

END_OF_DOCUMENT_TOKEN_TO_BE_REPLACED
Social media
and networks
Subscribe to our
newsletter