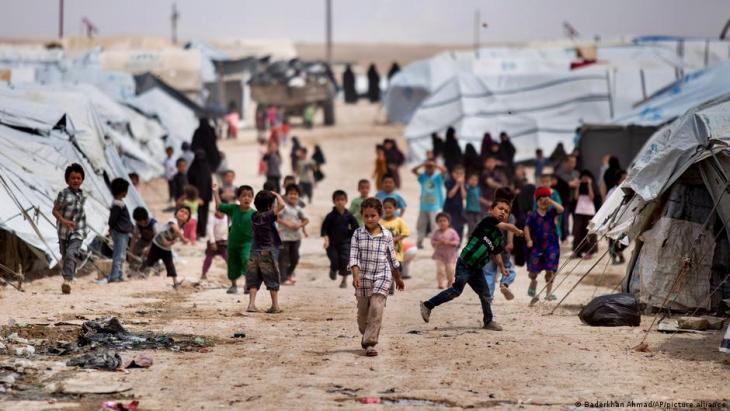 As Syrian camps housing families of Islamic State fighters get more dangerous, there are calls to bring children out, even if the mothers don't want to go. The idea of separating families is a controversial one. By Cathrin Schaer

In May 2022, an 8-year-old boy drowned in a sewage trench in al-Hol camp. In November, two girls, aged 12 and 15, were found in another sewage trench, reportedly beheaded after being sexually assaulted. An expert in extremism told DW that they had seen young children in al-Hol camp being taught to behead cats and dogs, practicing for recruitment to the extremist "Islamic State" (IS) group.

Al-Hol in north-eastern Syria, often described as "the most dangerous camp in the world", is home to over 53,000 people. Although not all the inhabitants still support IS, they are best known as being the displaced families of the group, who were forced to come here when IS was defeated in its Iraqi and Syrian strongholds.

Most of those in the camp are from either Iraq or Syria, but there are also between 10,000 and 11,000 foreigners from other countries, including in Europe, the US and Canada. The camp's population consists mainly of women and children. Aid organisations estimate that 60–64 per cent of the camp's population are children, and mostly under 12.

Given the conditions in the overcrowded camp, a lack of medical care, limited supplies and barely any education, life for the thousands of children in al-Hol was already hard. Over the past year, it has only become harder. There were 126 murders and 41 attempted murders recorded in 2021, making it al-Hol's most violent year. This year has been even worse, aid agencies said.

Additionally, neighbouring Turkey has been increasing air raids over the area because it considers the Syrian Kurds, who guard the camps, enemies. 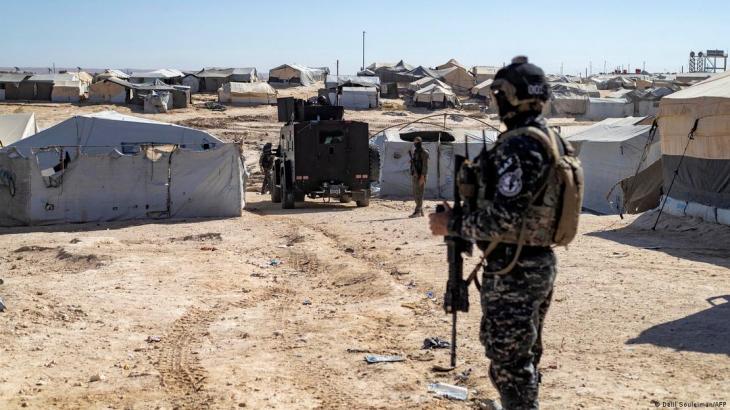 "Al-Hol in north-eastern Syria, often described as 'the most dangerous camp in the world', is home to over 53,000 people. Although not all the inhabitants still support IS, they are best known as being the displaced families of the group, who were forced to come here when IS was defeated in its Iraqi and Syrian strongholds," writes Cathrin Schaer

With all that, it might seem that if you were a parent, you would not want your children trapped in such a situation. But some of the mothers in al-Hol are choosing exactly this fate for their families.

Over 30 countries, including several European nations, have repatriated their nationals from al-Hol, Human Rights Watch noted in a November report. In a press release issued just before Christmas, Save the Children said that 1,464 women and children have returned to their home countries altogether since 2019, with a marked 60-per cent increase in repatriations in 2022.

However, some of the women approached by their governments decided not to take up the offer of repatriation. For example, the German Foreign Office told DW that the last woman who wanted to return to Germany came back in November with her four children.

"We assume that a low, double-digit number of German mothers and children are still in the Roj and al-Hol camps," a spokesperson from the Foreign Office said in a statement. "However, as far as we know, the remaining women do not wish to return to Germany."

The same is also true for women from other countries. The mothers who didn't want to go home made that decision for a variety of reasons, explained Jo Becker, advocacy director for children's rights at Human Rights Watch (HRW).

"In some cases, they didn't want to live in a non-Muslim country or they feared discrimination or prosecution," she said. "In other cases, their husbands may be in prison and they want to wait for his release, or don't want to make a decision without him. On the other hand, that may not necessarily be in the best interest of their children," she pointed out. 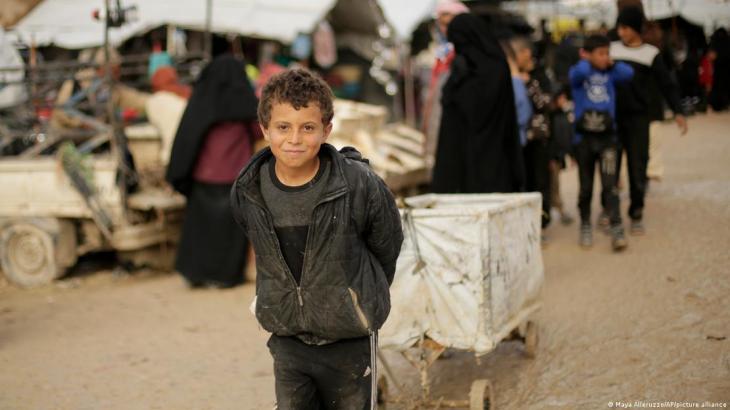 During a 2021 briefing on the fight against the IS group, the UN Security Council noted "many instances of radicalisation, fundraising, training and incitement" at al-Hol. At the camp, boys are often taken away to "re-education camps" when they reach adolescence to ensure they are not radicalised by the IS group

This is why some experts have suggested that countries should bring the children home, but leave the mothers in al-Hol, if that is what they want.

"Usually acting in the best interests of the child is to keep them with family members," argues Anne Speckhard, director of the US-based International Center for the Study of Violent Extremism (ICSVE).

"But that's not necessarily true if we're talking about IS family members, who may be staying in the camp because they're terrified of prosecution [back home] or they believe IS will eventually get them out of there," she said. "If you know of a child — say, a 7-year old whose mother is doing something abusive, giving them drugs or, for example, putting them in front of IS [propaganda] films — doesn't the state have the obligation to step in and remove that child from that home?"

Speckhard also points out that children are not usually jailed with their parents long term. "While we legally designate [al-Hol and Roj] as camps, they are in truth prisons," she said.

Peter Galbraith, a former US and United Nations diplomat and advisor to Iraq's Kurdish politicians, made the same case in a New York Times editorial earlier this year.

Most of the mothers wouldn't want to be separated from their children, he conceded. And it "would certainly be cruel and painful for the children. But I believe it is even more cruel to condemn a child to a life in prison because a parent made the decision to go to Syria to join a terrorist organisation," Galbraith argued. 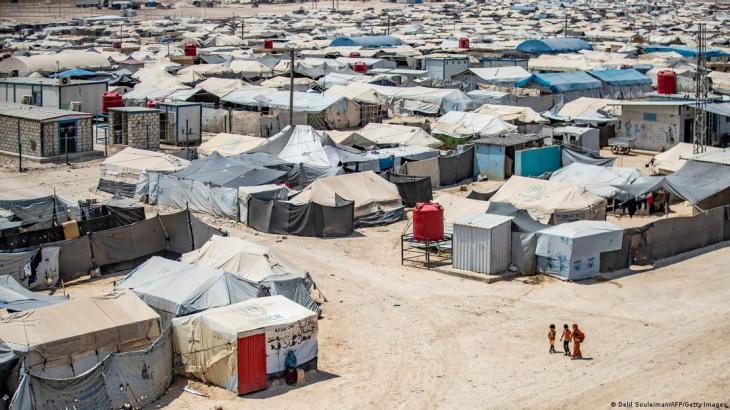 In 2021, Save the Children said that a total of 40,000 children from 60 different countries were living in dire conditions in the camps of Roj and al-Hol in north-eastern Syria and that two children die every week in al-Hol

Like other experts, Galbraith also spoke about the danger of children being radicalised in the camp. During a 2021 briefing on the fight against the IS group, the UN Security Council noted "many instances of radicalisation, fundraising, training and incitement" at al-Hol.

Galbraith suggested that children in the camps whose mothers did not want to, or could not, go home, could be taken to special children's villages run by the Syrian Kurds. Many children had relatives back home who would care for them, he added, and bringing them out of Syria would be easier this way.

In the child's best interest

Reports by aid organisations working in this area, including Doctors Without Borders, Save the Children and HRW, all emphasise the importance of acting in the best interests of the child and the terrible conditions in al-Hol camp. But none of them directly suggest separating parents and children.

"This is a tricky question that is only going to become more relevant in the future," the employee of a non-governmental organisation working in Syria and Iraq, told DW. They spoke off the record because they were not authorised to speak for their employer. "The relatively easy cases will be sorted out first and the group for potential repatriation will get smaller and more complex."

Article 9 of the UN's Convention on the Rights of the Child states that "a child shall not be separated from his or her parents against their will, except when competent authorities determine … that such separation is necessary for the best interests of the child." 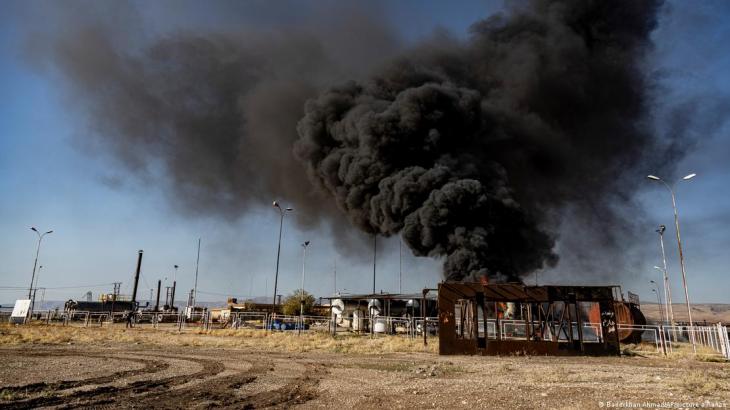 Smoke rises from an oil depot struck by the Turkish Air Force near the town of Qamishli, Syria, on 23 November 2022. Turkey's President Recep Tayyip Erdoğan said at the end of November that he would carry out a ground offensive into Kurdish areas of northern Syria "at the most convenient time for us". Turkey had already been carrying out air attacks on the region in retaliation for a deadly bomb attack in Istanbul earlier in the month that the president blamed on Syrian Kurds

If children were to be sent back to their home nations without their parent, there would need to be a process formulated and followed, with each situation decided on a case-by-case basis, HRW's Becker said.

Any process should require consultation with the mother, what options she has, what the likelihood of prosecution is back home and what sort of outcomes that might bring as well as which family members would take care of her children and how well the kids know those relatives. Older children should also have the opportunity to say what they want, she added, and it's important for officials to check back on families regularly because their attitudes may change, as the children get older or camp conditions change. "Granted, that's a pretty laborious process," Becker noted.

Even if some sort of procedure was created that would see children leaving al-Hol without their mothers, "conditions in the camp make it very difficult to follow any sort of due process," noted Okke Bouwman, communications director for Save the Children Syria, who visited al-Hol this week.

"However, none of this [situation] is the child's fault and they should not have to pay for the crimes of their parents," Becker argued. "We also believe in accountability for those [parents] who have committed offences. Those two things are not mutually exclusive," she concluded.

Any reconciliation between Turkey and Syria’s Assad regime would have disastrous consequences for many Syrians, explains Syria expert Kristin Helberg END_OF_DOCUMENT_TOKEN_TO_BE_REPLACED

Iraq bears the scars of decades of conflict and has seen its antiquities plundered, yet the House of Manuscripts' collection has managed to survive END_OF_DOCUMENT_TOKEN_TO_BE_REPLACED

Morocco has taken the 2022 World Cup by storm, with the northwest Africans reaching the semi-finals for the first time in their soccer history. As the knockout match approaches, ... END_OF_DOCUMENT_TOKEN_TO_BE_REPLACED

The Islamic Republic has been unable to quell the civil unrest that erupted three months ago, after Mahsa Amini died after being detained for violating hijab rules. Now the ... END_OF_DOCUMENT_TOKEN_TO_BE_REPLACED

The Kurds are under attack from two sides: from Turkey, and from Iran. The situation in their territories in northern Iraq is becoming increasingly desperate. Birgit Svensson ... END_OF_DOCUMENT_TOKEN_TO_BE_REPLACED

November 2022 sees the Arab world firmly in the spotlight with the COP27 in Egypt and the FIFA World Cup in Qatar. Public trust in MENA governments is weak, thanks to their ... END_OF_DOCUMENT_TOKEN_TO_BE_REPLACED
Author:
Cathrin Schaer
Date:
Mail:
Send via mail

END_OF_DOCUMENT_TOKEN_TO_BE_REPLACED
Social media
and networks
Subscribe to our
newsletter