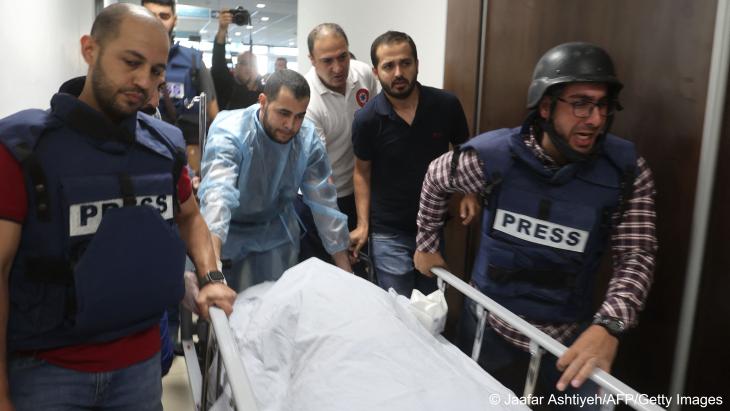 Veteran Al Jazeera journalist Shireen Abu Aqleh was shot dead by Israeli troops on Wednesday as she covered a raid on Jenin refugee camp in the occupied West Bank, the network said.

The Israeli army confirmed it had conducted an operation early on Wednesday in Jenin refugee camp, a stronghold of Palestinian armed groups in the northern West Bank. It firmly denied, however, that it had deliberately targeted journalists.

"The (army) of course does not aim at journalists," a military official told journalists. "There is an ongoing inquiry into this event. We offered and want to conduct a joint investigation with the Palestinians."

The army said there was an exchange of fire between suspects and security forces and that it was "investigating the event and looking into the possibility that journalists were hit by the Palestinian gunmen."

An agency photographer at the scene said Abu Aqleh was wearing a press flak jacket when she was shot.

Al Jazeera called on the international community to hold Israeli forces accountable for their "intentional targeting and killing" of Abu Aqleh. "In a blatant murder, violating international laws and norms, the Israeli occupation forces assassinated in cold blood Al Jazeera’s correspondent in Palestine", it said.

Another Al Jazeera journalist, producer Ali Al-Samudi, was wounded during the clash, the broadcaster added.

In recent weeks, the army has stepped up operations in Jenin, an historic flashpoint in the Israeli-Palestinian conflict. Several of the assailants blamed for deadly attacks on Israelis in recent weeks were from the area.

The army said that during its operation in the camp, "massive fire was shot toward Israeli forces by tens of armed Palestinian gunmen".

The Palestinian Authority called Abu Aqleh's killing an "execution", and part of an Israeli effort to obscure the "truth" about its occupation of the West Bank.

An official of Islamist group Hamas, which controls Gaza, called the incident "a premeditated murder".

"Media and press institutions should move to expel Israel and consider it an enemy of the freedom of the press," said Ghazi Hamad of Hamas's political bureau.

Tensions have risen in recent months as Israel has grappled with a wave of attacks which killed at least 18 people since 22 March, including an Arab-Israeli police officer and two Ukrainians.

The Israeli army has blamed some of the attacks on residents of Jenin and has stepped up operations in the area in recent weeks.

A total of 30 Palestinians and three Israeli Arabs have died during the same period, according to an agency tally, among them perpetrators of attacks and those killed by Israeli security forces in West Bank operations.    (AFP)

More on this topic
Despite unrest, it's business before politics in West Bank townIsrael ‘committed’ to status quo at Jerusalem’s Al-Aqsa compound despite wave of violenceJoseph Croitoru's "Al-Aqsa oder Tempelberg": Zeroing in on the Middle East conflict
Home
Print
Newsletter
MoreAll Topics

END_OF_DOCUMENT_TOKEN_TO_BE_REPLACED
Social media
and networks
Subscribe to our
newsletter