Skip to main content
Al-Qaida's Third Generation on the Web

Al-Qaida has launched its first online magazine in English: Inspire. With Islamist propaganda and instructions for do-it-yourself bombs, it is aimed at supporters from the west. Emad M. Ghanim reports

Al-Qaida has launched its first online magazine in English: Inspire. With Islamist propaganda and instructions for do-it-yourself bombs, it is aimed at supporters from the west. Emad M. Ghanim reports

​​ Born in Pakistan, for many years Faisal Shahzad led a normal life – till he came into contact with radical Islamist ideas. This ideology ultimately inspired the 'Times-Square-Bomber' to carry out an attack at the centre of his new home, New York. In early May 2010 he placed an explosive device in a car in the middle of Times Square; it was only thanks to a tip-off from a passer-by that it was defused in time.

It is precisely people like Shahzad that al-Qaida is now targeting with its new English-language online magazine Inspire, says Jordanian terrorism expert Mohammad Aburumman. It has been launched at a time when the number of al-Qaida sympathisers in the west is rising, he says, "people from western countries are the target group this issue is particularly aimed at."

​​ The magazine first appeared online in early July and can be downloaded as a PDF. It is published by the Al Malahim media production group, the media wing of al-Qaida. The journal's index includes articles such as "Make a Bomb in the Kitchen of Your Mom" which consists of "a detailed yet short, easy-to-read manual on how to make a bomb using ingredients found in a kitchen." Other pieces include discussion of the burqa-ban in western countries, tips on encrypting messages and an English translation of a speech by Osama bin Laden with the title "The Way to Save the Earth".

One of the central figures in al-Qaida's campaign to target people from the west is also given a platform: the US-Yemeni preacher Anwar al-Awlaki. According to assessments by security services, his English-language sermons, which can be found on the internet, have inspired countless terrorists. Al-Awlaki has a Facebook profile, a blog, and has uploaded numerous videos to YouTube, leading him to be dubbed the "Bin Laden of the Internet". He has been linked to the attempted attack on an aeroplane in Detroit on Christmas day. His article for Inspire is entitled "May our souls be sacrificed for you".

That so much space was freed up in the magazine for this man clearly demonstrates which generation of al-Qaida fighters are to be addressed, Mohammad Aburumman says: "the new generation, the third, who were born in the west and have lived there, but cannot speak Arabic, such as Abu Dujana al-Kharasani, Umar al-Faruq and Nidal Malik Hassan."

Known as the 'Bin Laden of the Internet': Anwar al-Awlaki, fugitive US-born radical preacher and key figure in al-Qaida in the Arabian Peninsula, based in Yemen's remote tribal areas

​​ The Algerian terrorism expert Ghamrassa Abdul-Hamid believes Al-Qaida is clearly undergoing a fundamental change, of which its enhancement of its media work and its adaption to the new generation are a part. "Al-Qaida's media work is currently experiencing a huge, qualitative boost in the transmission of its messages and instructions. Where terrorist organisations were once content with publishing statements, messages and images of their attacks, now they are attempting to disseminate their propaganda on another level throughout the world," he says.

The internet has long ceased to be solely a space in which ideological media wars are fought; it is increasingly becoming an effective instrument for enlistment, recruitment and training for new potential terrorists in the target countries, says Mohammad Aburumman. Western al-Qaida supporters belonging to the current, so-called third generation have increasingly begun planning and executing terrorist activities without direct instructions from the organisation's headquarters. "The medium of the internet has been of great use," Aburumman suspects. 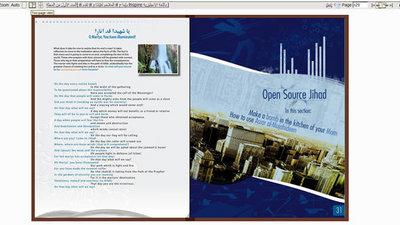 "Make a Bomb in the Kitchen of Your Mom". Screenshot of the online magazine Inspire

​​ Even the language barrier, which so far has been a big hurdle in establishing contact with this generation, can be overcome with the publication of this English-language magazine. Experts such as Aburumman fear that now the influence of al-Qaida on this generation will grow.

The first edition of the magazine, which went online at the beginning of July and was then taken up by several Islamist forums, did not get off the ground however. The contents page listed speeches, articles and instructions, running to sixty-seven pages. Only the first three could be read however; the rest was unintelligible, pages of scrambled data. US media speculate that this is the result of a successful sabotage action by American security services. It appears that the US intelligence agencies have won this round of the virtual fight. It is also certain that it will not be long before the next round starts.

Al-Qaeda's PR Strategy on the Internet
Free Propaganda
The violent Islamists of al-Qaeda, the notorious international terror network, may be accused of promoting an antiquated ideology, but when it comes to the movement's PR strategy, they adhere to the most modern standards. Alfred Hackensberger reports

Al-Qaida on the Internet
Are America's Muslims Becoming Radicalized?
In its report on recent developments in Islamist terrorism, the US Senate Committee for Homeland Security warns about Al Qaeda's sophisticated recruitment methods. For the first time, it mentions the possibility that America's Muslims may become radicalized. Joseph Croitoru reports