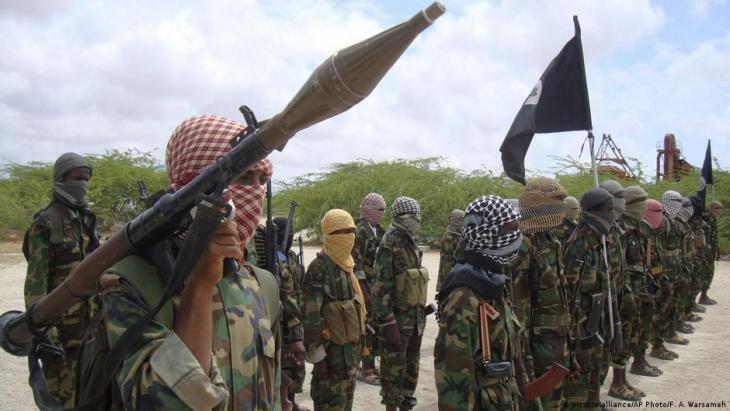 Al-Shabab jihadists armed with guns and explosives stormed an African Union base in Somalia on Tuesday, triggering a fierce firefight that killed an unknown number of Burundian peacekeepers. The Somali government and the African Union condemned the “terrorist” attack, although they did not disclose how many people had died.

A high-ranking Burundian military officer told journalists about 30 soldiers were killed and another 22 wounded, while a dozen were missing.

AU forces sent in helicopter gunships after the pre-dawn attack on a camp housing Burundian troops near Ceel Baraf, a village some 160 kilometres northeast of the capital Mogadishu, military officials and witnesses said. “There was heavy fighting and casualties inflicted on both sides,” local military commander Mohamed Ali told reporters by phone. “They launched the attack with a car bomb blast before a heavy exchange of gunfire broke out.”

It was the first such attack on a peacekeeping base since the AU Transition Mission in Somalia (ATMIS) replaced the previous AMISOM peacekeeping force on 1 April.

Al-Shabab, which has been waging a deadly insurgency against Somalia’s fragile central government for more than a decade, claimed responsibility, saying it had taken control of the camp and claimed to have killed 173 soldiers. It also released a video showing bodies of what appeared to be slain soldiers lying on the ground, according to the SITE Intelligence Group that monitors extremist groups.

The death toll claims and the video could not be independently verified.

Somalia’s government said it "condemns in the strongest possible terms the heinous attack targeting ATMIS" and appealed to the international community to do more to support Somali forces and ATMIS "in effectively combatting terrorism".

AU Commission chief Moussa Faki Mahamat said on Twitter he spoke to Burundi’s President Évariste Ndayishimiye to pay his respects for the "sacrifice" of the peacekeepers who lost their lives.

The attack highlights the ongoing security woes in the troubled Horn of Africa country, which is also embroiled in a deep political crisis over delayed elections and faces the threat of famine.

The Burundian source said about 400 Islamist fighters stormed the base after blowing up two car bombs. Burundian soldiers then retreated to a nearby hillside where they continued to fight, supported by drones and helicopters.

"The helicopters fired missiles and heavy machineguns, we saw smoke rising over the camp but we don’t know about the situation exactly," said another witness, Ahmed Adan.

In September 2015, at least 50 AU troops were reported by Western military sources to have died when Al-Shabaab fighters overran a military base southwest of Mogadishu.

In October 2011, Al-Shabab claimed to have killed more than 70 Burundian peacekeepers in battle and laid out dozens of bodies in military uniform in one of their strongholds outside Mogadishu.

At the time the African Union said it had lost about 10 soldiers, and dismissed the militants’ claims as a stunt.

ATMIS – made up of troops from Burundi, Djibouti, Ethiopia, Kenya and Uganda – is tasked with helping Somali forces take primary responsibility for security in a country that has been mired in conflict since 1991.

Under a UN resolution approving its creation, ATMIS is projected to gradually reduce staffing levels from nearly 20,000 soldiers, police and civilians to zero by the end of 2024.

Al-Shaaab fighters controlled Mogadishu until 2011 when they were driven out by AU troops. But they still hold territory in the countryside and frequently attack civilian, military and government targets in Mogadishu and elsewhere.

Last week, parliament chose new speakers for the upper and lower houses following the completion of delayed legislative elections – a key step on the path towards a long-delayed presidential vote. The drawn-out process has been marred by deadly violence and a bitter power struggle between the president and prime minister.

Somalia’s international partners have voiced fears the delays were distracting from its myriad problems including the fight against Al-Shabaab and widespread drought which has left millions facing hunger.    (AFP)

More on this topic
From failed state to fragile state? Somalia and the rocky road towards greater stabilityIslamism in eastern Africa: Not immune to terrorIslamists in Africa: The ever-present threat
Home
Print
Newsletter
MoreAll Topics

END_OF_DOCUMENT_TOKEN_TO_BE_REPLACED
Social media
and networks
Subscribe to our
newsletter