Even Alaa Al Aswany's early works were shot with the brilliance for which he is now renowned. This collection of short stories centres on Hisham, soon to be a professor of surgery, who loses himself in cynicism and criticism of Egyptian culture. Angela Schader read the book 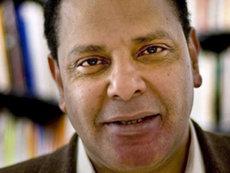 Alaa Al Aswany was born in Cairo in 1957 and studied dentistry in Egypt and America. He began writing novels in the late 1980s. He made his literary breakthrough in 2002 with The Yacoubian Building

​​ Only 300 copies of the book's first edition were printed. It was printed and distributed free of charge to critics and friends at the personal expense of the author.

You would think that any author who made such an inauspicious entry onto the literary stage would be destined to spend the rest of his writing career in literary limbo, where authors have to be content with the acclamation of a small circle of admirers and their ambitions reach no further than print-on-demand publications.

This collection of short stories – published in English as Friendly Fire and recently in German as Ich wollt', ich würd' Ägypter (I would wish I were an Egyptian) – is the literary debut of a Cairo dentist who would become the most successful contemporary author in the Arab world a decade later with his novel The Yacoubian Building.

The Yacoubian Building made Alaa Al Aswany a legend in more ways than one: not only because his X-ray image of the tenement house in the book's title provided a panorama of Egyptian fates that the country's politicians and guardians of public morals would prefer to see hidden behind solid walls, but also because the author has the discipline to continue dividing his working hours between the writing desk and the dentists' chair.

The phrase "I would wish I were an Egyptian if I weren't one already", a quote attributed to the nationalist Mustafa Kamil Pasha, opens the "The Isam Abd el-Ati Papers", the most weighty text in this early collection of short stories. It is quickly and thoroughly taken apart by the protagonist of the story in a vitriolic diatribe against all things Egyptian.

It is no wonder, therefore, that the collection made the gentlemen of the Egyptian Book Organisation, to whom Alaa Al Aswany sent his manuscript in 1989, nervous (the comical negotiations between the author and the civil servants are recorded in detail by the author in the book's foreword).

​​ This is also the reason why Al Aswany initially had to publish the book himself and why it was returned post haste by a major Egyptian publisher even after the resounding success of The Yacoubian Building. The publisher was afraid that publication of the short stories could land him in prison. Nevertheless, this literary debut lacks nothing of the quality of the novel that would follow.

Both as a writer and a columnist for opposition newspapers in Egypt, Al Aswany is not afraid to speak his mind when it comes to voicing criticism of the conditions in his country. Nevertheless, no widely read person would accuse him of sharing the opinions expressed in "The Isam Abd el-Ati Papers" as the civil servants in the Egyptian Book Organisation did.

Without disavowing the character, with whom he does have a certain sympathy, the author uses the figure of Abd el-Ati to show how sheer human clumsiness can lead someone to drown in the bile of his own arrogance; how someone clawing tenaciously to the absolute conviction of his own intellectual superiority lashes out at everyone and everything around him, hitting those closest to himself, yet is ultimately helpless to prevent his own downfall.

At one point, the protagonist admits "My mind can get around the most complex intellectual quandaries, yet spontaneous, simple dealings with other people confuse me and make me feel helpless." He chooses to seek refuge in splendid isolation and pays the price of an inhuman outlook that sees him comparing his compatriots with vermin in a drain and his mother, who has cancer, with a panicked laboratory rat. Ultimately, he falls from his ivory tower into the depths of madness.

In addition to the "The Isam Abd el-Ati Papers", the volume includes sixteen much shorter stories in which Al Aswany both pokes fun at his compatriots' weaknesses with his sharpened pen and looks kindly on their sorrows without ever becoming maudlin.

Sometimes both attitudes appear in the one story, for example in the portrait of a sedate man overcome by all-too-human feelings, plagued by pangs of hunger while sitting at his father's deathbed during the month of Ramadan.

In sharp contrast, the author shows no mercy whatsoever to egoism and hypocrisy of the kind revealed in the letter to "My dear sister Makarim". Here, he describes with a cool and unswerving gaze that perfectly matches the senseless horror of events, how night after night, the letter-writer in question bears witness to a ritual of violence – committed almost reluctantly on the one hand, borne without tears on the other – in which a young man punishes his supposedly unfaithful wife.

Naturally, ironic deference is paid to the mechanisms of an ossified state structure that has been undermined by corruption and nepotism when, for example, a poor man is evicted from his little paradise as a tea-maker by an anonymous administrative ordinance, or when a young doctor in a new job is suddenly exposed to a well-nigh systematic tyranny peppered with diverse hostilities and jealousies.

Al Aswany's most critical and biting short stories illustrate what it is that differentiates the author from his figure Isam Abd el-Ati. These stories show clearly that the human wisdom of the mind they spring from does not hide behind intellectual attitudes, but instead shines through in the "spontaneous, simple dealings with people".

Where bowing and scraping is required, Alaa Al Aswany prefers to show his claws – as illustrated in his caustic caricature of the Egyptian president Mubarak in the novel Chicago. Nevertheless, he is equally capable of highlighting with sensitivity the distress of a low-ranking employee in the Ministry of Planning, whose day is ruined by a rejected and frayed shirt.

Alaa al-Aswani
The Arab World's Literary Taboo-Breaker
Alaa al-Aswani is currently the most successful Arab novelist. He was the only Arabic-language writer to participate in this year's lit. COLOGNE in Germany, the largest literary festival in Europe, where he read from his latest novel "Chicago". Samir Grees was listening

END_OF_DOCUMENT_TOKEN_TO_BE_REPLACED
Social media
and networks
Subscribe to our
newsletter