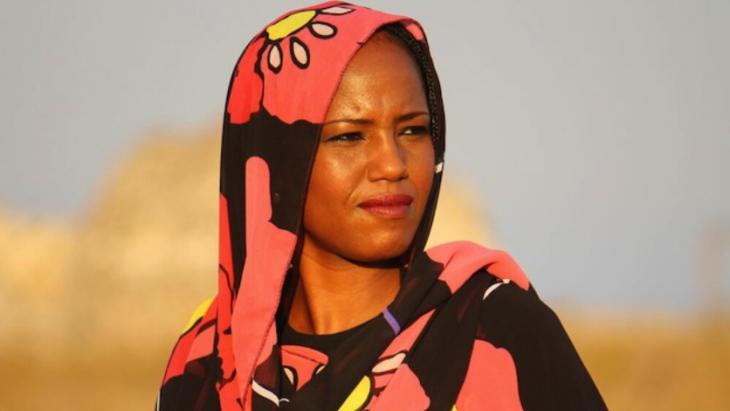 While singing about the hopes and aspirations of her own people, Aziza Brahim has created an album of songs which captures the plight of refugees and displaced peoples everywhere. Richard Marcus listened to this powerful and heartrending collection

When the Spanish expelled or killed Muslims and Jews in the 15th century, those who made it into exile usually chose to seek refuge across the Mediterranean in North Africa. How ironic is it then that more than 500 years later, Muslims seeking refuge from persecution in North Africa are now finding safe haven in the country they were once forced to flee? Aziza Brahim is one such individual. A member of the marginalised Sahrawi people forced to live in refugee camps in Morocco, Brahim left there for Barcelona, Spain in an attempt to bring her peoples' plight to the world's attention.

Like the famous Tuareg bands from the same part of the world she has chosen to do so through music. Her newest album, Abbar el Hamada, produced by Glitterbeat Records is succinctly dedicated to "my people, after forty years of occupation, exile and diaspora." From the album's title – which translates as Across the Hamada and refers to the word the Sahrawi use to describe the rocky desert landscape their refugee camps occupy – to the lyrics of each of the album's ten songs, everything about it carries Brahim's message of hope, resistance and defiance.

Her songs don't merely focus on her own people, however. While specific reference may be made to their plight, the lyrics are also universal statements about the stateless peoples of the region, and by extension, of the world. She calls it "a conversation between countries, between cultures, between generations, between tribes, between beliefs, between people." To that end, the music of this album not only bears traces of her adopted home in Spain, but is also inspired by the cultural traditions of the Western Sahara and points further afield. 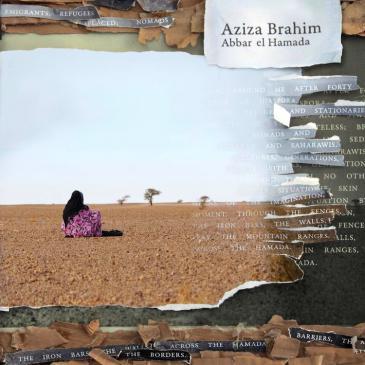 From the album's title – which translates as Across the Hamada and refers to the word the Sahrawi use to describe the rocky desert landscape their refugee camps occupy – to the lyrics of each of the album's ten songs, everything about it carries Brahim's message of hope, resistance and defiance

The first song on the disc, "Buscando la Paz", ("Searching for Peace") shows Brahim taking the guitar riffs and rhythms of Latin music to sing a message of universal peace and hope.

At the same time she is also careful to emphasise that peace can only come when the dispossessed are allowed to return to their homes. "How I hope we meet again/In the land of the lost homeland,/She calls for me and I listen/I claim her too, I need her."

On the album′s second track, "Calles d Dajla" ("Streets of Dakhla") the music switches to the more aggressive sound of desert blues. The song, which begins with the traditional sound of a woman's voice raised in ululation, celebrates the city of Dakhla. While the city is under the nominal control of the Moroccan monarchy, it is also claimed by the Sahrawi Arab Democratic Republic (SADR). The song envisions a time when the Sahrawi will once again have control of the city and by extension the lands they claim in the Western Sahara.

The album′s title song, "Abbar el Hamada" (Across the Hamada) is a homage to the area of the Western Sahara the Sahrawi call home. It reminds us of the deep connection a people can feel for their homeland. No matter how inhospitable it might appear to outsiders, home will always inspire passionate feelings in those who have roots tying them to its environment. In this song Brahim sings of her memories of a night spent out on the desert. "Amongst the blue of the starlit sky/amid those mountains so exuberant/The dunes, paradise, delight/Of one creative night".

The music accompanying the lyrics is gentle, accentuating the yearning expressed by Brahim's voice. At the same time it manages to evoke the simple beauty of her description making us understand the true depth of her feelings. It is a remarkable example of how this whole recording uses music and lyrics to convey not only political statements, but also the more profound feelings of a people's interconnection with the land they come from.

The musicians on the album reflect Brahim's desire to create a more universal sound. Aside from those who appeared on her last album – Guillem Aguilar (bass), Ignasi Cusso (guitar) and Kalilou Sangare (guitar) – she's joined by Senegalese percussionist Sengane Ngom and Senegal and Gambian-trained drummer Aleix Tobias.The core group is rounded out by guest musicians Samba Toure (guitar), Xavi Lozano (flute) and Badra Abdallahi singing harmonies. Brahim not only sings, but also supplies percussion on the tabal (a Catalonian drum).

Brahim takes listeners on a journey, physical and emotional, with the ten songs on this disc. Not only do the different musical styles reflect the path she has travelled from the Sahara to Spain, she also manages to trace the emotional upheavals caused by being forced to leave her homeland.

While we might not be able to understand the lyrics to her songs without consulting the translations in the booklet accompanying the CD, her expressiveness as a singer gives each tune a depth few others are able to express.

More and more the world seems to be filling up with displaced people. Whether they are forced to flee because of war or they've been pushed out by occupiers or famine, they all share the same thing. A desire to be where they belong; the place where the stones and the very air they breath is part of their identity.

There are many wonderful bands who sing about their lost homelands and about the plight of their specific people. However few of them have managed to achieve what Brahim has with Abbar el Hamada. While singing about the hopes and aspirations of her own people, she has also created an album of songs which captures the plight of refugees and displaced people everywhere. This is a powerful and heartrending collection of songs which should be compulsory listening for anyone who still doesn't understand the pain these people are experiencing.

Chinese President Xi Jinping's visit to Saudi Arabia in December 2022 may have rattled Washington, but it simply highlighted the Arabs’ desire to diversify their foreign relations ... END_OF_DOCUMENT_TOKEN_TO_BE_REPLACED

Nouara may be 65, but she is ready to join thousands of others who burn their ID and pay traffickers for the chance of a new life in Europe. Zineb Bettayeb reports END_OF_DOCUMENT_TOKEN_TO_BE_REPLACED

In Doha, Arabs from Morocco, Tunisia, Egypt and Algeria are gathering to celebrate the first ever FIFA World Cup to be held on Arab soil. The criticism from Europe? Over the top, ... END_OF_DOCUMENT_TOKEN_TO_BE_REPLACED

"Rebel Game: The Power of Football in the Middle East and the Qatar World Cup", an anthology published by Middle East researchers Jan Busse and Rene Wildangel, takes the upcoming ... END_OF_DOCUMENT_TOKEN_TO_BE_REPLACED

After a two-year hiatus, the Arab League re-convened at the beginning of November in Algiers against a backdrop of uncertainty and discord. By Pierre Boussel END_OF_DOCUMENT_TOKEN_TO_BE_REPLACED
Author:
Richard Marcus
Date:
Mail:
Send via mail

END_OF_DOCUMENT_TOKEN_TO_BE_REPLACED
Social media
and networks
Subscribe to our
newsletter