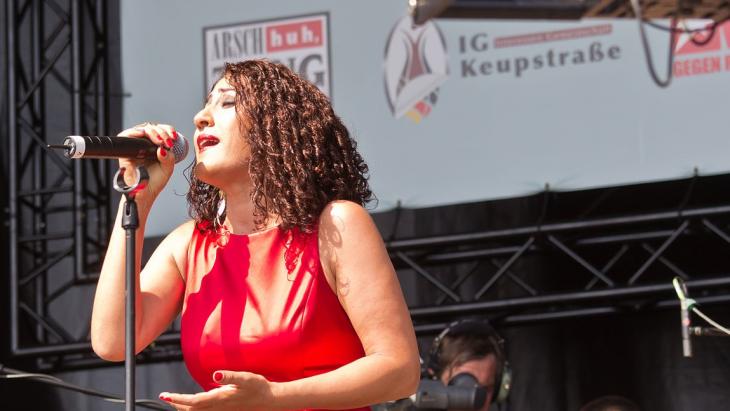 The album also includes songs with lyrics by Huseyin Erdem, a Kurdish writer in exile in Germany and founder of the Kurdish PEN centre. A comment underneath a video from 2018 of a concert Dogan gave in Vienna reads: "We became children incapable of speaking Kurdish, raised by parents who knew no Turkish." This message – or words to the same effect – appears under her videos time and again.

It’s a remark which reflects the feelings of an entire generation of young Kurds, who feel torn away from their roots and – if they live in Europe – are even keener to seek out a connection with the country of their heritage. Dogan is their voice. Her music promises to take her audience back to their roots for a few moments. The whole room trembles when she plays and her young audiences dance between the seats, performing the traditional Anatolian folk dance, the halay.

Aynur Dogan was born in the small town of Cemisgezek in Eastern Turkey in 1975, a town once characterised by its Armenian cultural heritage and where the traditions of the Alevis live on today. Cemisgezek is located in Tunceli province, also known as Dersim, a place still bound up with memories of the civil war between the Kurds and the Turkish state.

In the 90s, Tunceli was a stronghold of the Kurdish resistance. In 1992, Dogan and her family fled the bloody war for Istanbul, where she learnt to play the saz and spent the nineties studying singing, immersed in the metropolitan music scene. She released her first album in 2002.

A hint of rebellion

Some of Dogan’s songs carry this same hint of rebellion, a taste of resistance in the face of those who have deprived her community of fundamental rights. Dogan often sings of the lives and suffering of the Kurds, particularly the fate of Kurdish women, exemplified in her first major hit, "Kece Kurdan" (2004).

"Girls, rise up," she sings, "Let the world hear your voices. (…) We are the Kurdish roses. We have rebelled because of those who are ignorant." The song caused controversy in Turkey on numerous occasions, such as in 2004 when a charge was brought against a radio station which had played the song in the city of Adana in Southern Turkey. The justification for the charge claimed that the station had played the song to incite unrest among its listeners.

Dogan has sometimes met with resistance when performing in Turkey; audiences have booed her for singing in Kurdish. Today, the Turkish government considers Dogan to be a somewhat uncomfortable artist – as a result, she performs more frequently in Europe than in her home country.

For years, Dogan has worked with notable international artists in the West, such as the Silk Road Ensemble, the Kurdish-Iranian kamancheh player Kayhan Kalhor, and the famous cellist Yo-Yo Ma.

The latter once said, "To listen to Aynur’s voice is to experience the transformation of all levels of human joy and human suffering into a single sound. Her voice reaches so deeply into our souls, it settles in our hearts and, for a moment, we are one."

Services to the preservation of Kurdish culture

Dogan features prominently in Fatih Akın’s documentary film Crossing the Bridge / The Sound of Istanbul. For many years, she has been a regular guest at the renowned Osnabruck Morgenland Festival.

In February 2020, Dogan had planned to perform in Turkey again for the first time in five years. She was to play Istanbul and nine other major cities, as well as the Kurdish cities of Mardin and Diyarbakir.

In a way, it would have been a return to the early days of her career. Every concert soon sold out. However, the entire tour had to be pushed back to April of this year due to the attack on Turkish soldiers by the Syrian army in Idlib.

Subsequently, coronavirus reached Turkey and the tour was cancelled again. It remains unclear when the tour will be able to take place. In the meantime, the title of her latest album, ‘Finding solace in time’, seems perfectly tailored to these extraordinary times.

The village of Vakıflı (population 150) in the southern Turkish province of Hatay near the Syrian border is the last remaining Armenian village in Turkey. Lately, interest in the ... END_OF_DOCUMENT_TOKEN_TO_BE_REPLACED

How can the various realities of Kurdish life, shaped by depression, resistance and war, be depicted in art? This is the question addressed by the “bê welat – the unexpected ... END_OF_DOCUMENT_TOKEN_TO_BE_REPLACED

Ayse Gerner is a Muslim woman and a marriage counsellor. It is a combination appreciated by her clients, most of whom are Muslim. Although Muslim couples face the same ... END_OF_DOCUMENT_TOKEN_TO_BE_REPLACED

Born amid the horrors of war in Iraqi Kurdistan, Danish author Sara Omar now uses her voice to denounce violence inflicted on women in the name of reactionary Islam, a "calling" ... END_OF_DOCUMENT_TOKEN_TO_BE_REPLACED

The New Patrons seek to sponsor art projects initiated by citizens in order to better dovetail art and life. Anyone can become their client. In Berlin, the impressive comic " ... END_OF_DOCUMENT_TOKEN_TO_BE_REPLACED

Ronya Othmann's novel "Die Sommer" (The Summers) tells the story of Leyla – the daughter of a German and a Yazidi Kurd – who visits her grandparents' Yazidi village in northern ... END_OF_DOCUMENT_TOKEN_TO_BE_REPLACED
Author:
Marian Brehmer
Date:
Mail:
Send via mail

END_OF_DOCUMENT_TOKEN_TO_BE_REPLACED
Social media
and networks
Subscribe to our
newsletter