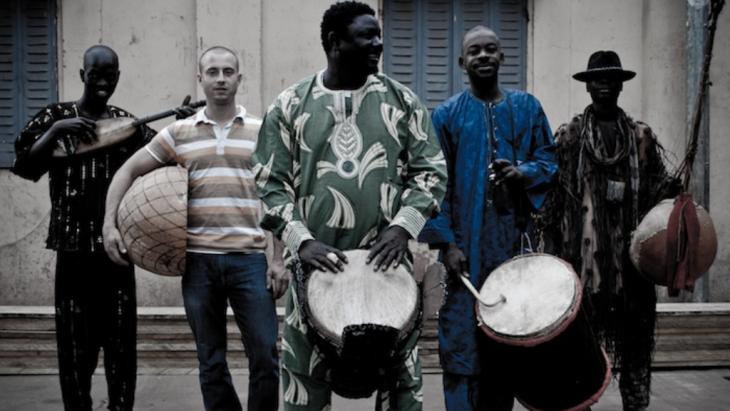 A fascinating mix of the old and the new

The BKO Quintet was founded during the state of emergency in Mali in 2012. Even though the tracks on the quintet's album "Bamako Today" feature primarily traditional Malian instruments, the resulting sound is anything but typical of the music of this country. According to Richard Marcus, it is raw and both extraordinary and thrilling to the ear

Mali and music. More and more, those two words are becoming synonymous with some of the most exciting performers on the world's stage. Up until 2012, the Festival au Desert in northern Mali was a major stop on the world festival tour, attracting celebrities like Bono and Robert Plant as audience members and performers. The 2012 uprising and subsequent targeting of musicians by terror groups in northern Mali resulted in the cancellation of the festival and forced many of the country's internationally celebrated musicians to flee.

While the occupation of the north has been ended, the threat to musicians isn't over. Nevertheless, this hasn't prevented them from producing music and doing their best to keep their cultural traditions alive. Whether in exile, like Tinariwen, or in the relative safety of the south, not only have those seeking to create a homogenised culture in Mali failed to silence them, individuals and bands are working to preserve and evolve the music of their homeland. While the recent attack on a bar in Mali's capital city of Bamako, in the southern part of the country, hasn't been directly linked to fundamentalists, it's an indication of the dangerous conditions musicians continue to face throughout the region.

All of which makes the new album from the BKO Quintet, "Bamako Today", released on the Buda Musique label on 15 March 2015, all the more important. Aside from it being an album of great music by accomplished musicians, it also shows how they are building on the foundation of their traditions to create something new. In fact, listening to this CD is akin to actually seeing and hearing the evolution of something new. For even though the majority of the songs feature primarily traditional Malian instruments, the sound is far different from almost anything else I've heard come out of this country.

A sense of urgency 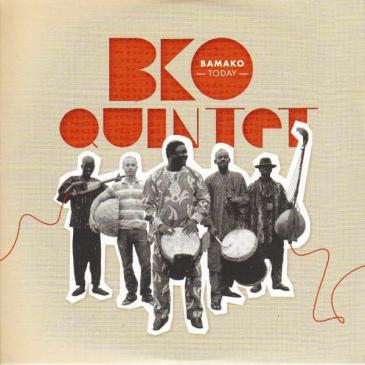 "In order for a culture to thrive, it has to continue to grow," says Richard Marcus. BKO's "Bamako Today" is an extension of the movement towards growth: "a smooth grafting of the traditional and the modern in an attempt to make what they call 'Trad Actual Malian Sound', the New Tradition of Mali"

The band was formed during the 2012 state of emergency, and the album was being recorded even as the insurgents were threatening to invade from the north. Perhaps that's where the urgency pervading the album comes from, or maybe it comes simply from their desire to do something different. The songs on the album are mainly traditional, but the band has given them their own interpretations. They've altered melodies, changed arrangements and two tracks, "Comment Ca Va" and "Donsolu" include lyrics sung in French and English respectively (the latter features guest Piers Faccini on vocals and acoustic guitar).

The core of the band is made up of co-founders Aymeric Krol and Ibrahima Sarr (percussion and drums), Fassara Sacko (lead vocals), Nfali Diakite (dansongnoi (bass ngoni)/lead vocals) and Abodulaye Kone (ngoni). Aside from Faccini, they are also joined by Julien Raulet (electric guitar) on tracks one and seven and Mbaba Sissoko (ngoni) for tracks four and six. Each of them brings his own musical experience and traditions to the band, and the resulting melange is both extraordinary and thrilling to the ear.

This is neither the refined precise renderings of traditional songs we've heard in the past, nor is it what we've come to know as either desert blues or Malian blues from other contemporary bands. Instead we can hear elements of each scattered throughout the album. There's an overall rawness to the sound, which takes the CD into previously unexplored territory by bands from this region. Listen to the disc's opening track, "Ntana" and you'll hear the differences. Certainly they are using all the same instruments others have used in the past; it's what they do with them that's so exciting.

The interplay of Diakite and Kone's bass and lead ngonis respectively with Raulet's electric guitar create what is initially an almost trance-like atmosphere to the song as they weave around Diakite's lead vocals. Then we are jarred out of our reverie by a sudden assault from the percussion. The drumming of Sarr and Krol is like a call to battle or hunt. They stir the blood and bring us back to reality; a world where danger lurks and nothing can be taken for granted.

Without translations of the song's lyrics the music becomes even more important to most listeners. By choosing to push the music in new directions, the BKO Quintet gives it an emotional depth that gives us more of an insight into a song's content than is normal under these circumstances. It's not just the instrumentalists who are given more range, both vocalists take far more liberties with their mode of expression than is normal for the griot tradition. Instead of merely telling the story, they also appear to be giving us their opinions and expressing how they feel about a piece of history. Of course this is an assumption, but it almost feels like they are using the old to express how they feel about the present.

With the music of Mali being considered one of the main arteries feeding the heart of contemporary popular music, it's fascinating to hear what happens when the old and the new wash up against each other as they do on this album. For not only have the members of the BKO Quintet reached into their own past for inspiration, they've stretched their hands out to the rest of the world. It's not just the inclusion of guitars and lyrics in English and French either, it's adding elements of pop and rock and roll to the music. How many times have you heard rock'n'roll played on ngoni and other traditional Malian instruments as is the case in track nine, "Kongo Kono"? Not only does it sound great; it sounds right.

In order for a culture to thrive, it has to continue to grow. As many people around the world have discovered, allowing yourself to become hidebound by tradition creates stagnation, which leads to a slow death. Musicians in Mali, of all backgrounds and traditions, have been using music to keep their traditions alive for decades now. In order to keep the sound relevant while maintaining the integrity of the message, they have picked up electric guitars and other modern instruments. The BKO Quintet's "Bamako Today" is the next logical extension of this movement towards growth, a smooth grafting of the traditional and the modern in an attempt to make what they call "Trad Actual Malian Sound", the New Tradition of Mali.

Home
Print
Newsletter
More on this topic
Album review: "Kirike" by Kasse Mady Diabate – "Understanding is what we wish for: to live in peace"Interview with Mali expert Marie Rodet: ''The whole region is potentially explosive''Consequences of the military intervention in Mali: A tinderbox situationInterview with Bakary Sambe: ''In the Arab world, we Africans are viewed as inferior Muslims''Musicians in Mali: Fighting back against censorship
Related Topics
African music, Musical worlds
All Topics

Anansy Cisse's new release "Anoura" – literally 'the light' – is not only a fine example of Malian music, but the story behind the album is also a microcosm of the struggles ... END_OF_DOCUMENT_TOKEN_TO_BE_REPLACED

The end of July saw the launch of the African Union’s "Sauti" digital publication, the first young feminist platform in Africa, which this year showcases stories by female youth ... END_OF_DOCUMENT_TOKEN_TO_BE_REPLACED

Timbuktu, the ancient desert city in Mali, has always been shrouded in myths. Charlie English’s "The book smugglers of Timbuktu" proves that the city has not lost its magic. By ... END_OF_DOCUMENT_TOKEN_TO_BE_REPLACED

With "Amankor/The Exile", the Kel Tamashek band Tartit have produced another cultural treasure for the rest of the world to appreciate. Their original intent may have been to keep ... END_OF_DOCUMENT_TOKEN_TO_BE_REPLACED

Cultural arrogance has long been a feature of Western journalism and it continues to flourish. But can journalists really describe the world from the perspective of a Yemeni ... END_OF_DOCUMENT_TOKEN_TO_BE_REPLACED

Comments for this article: A fascinating mix of the old and the new

THIS IS MY TYPE OF MUSIC

END_OF_DOCUMENT_TOKEN_TO_BE_REPLACED
Social media
and networks
Subscribe to our
newsletter