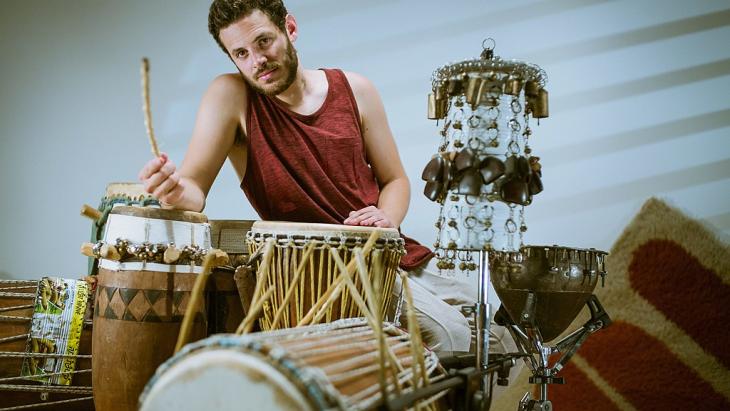 Most albums take only a few weeks to complete. While that doesn't include song-writing and music composition, the actually physical recording period usually isn't too long. However, in the case of Xalam, Ben Aylon's first international album with Riverboat Records, the process of recording and mastering took years.

What is more, most people record their albums in the sterile environment of a studio, using the latest modern equipment at their disposal. Aylon recorded all over the world in various locations using a variety of improvised equipment, including lamps as microphone stands for recording vocal tracks laid down in a hotel room.

This kind of improvisational attitude is not only indicative of the nature of the album, but Aylon's musical trajectory as well. Ben Aylon is first and foremost a percussionist. Born in Israel, he has been working and studying with drummers in Senegal since 2008 to learn their techniques. While his primary focus has been on learning the specifics of the traditional Senegalese drum, the sabar, he has also become proficient in other traditional African instruments including the ngoni, a plucked string instrument which can also be used for percussion purposes.

It was from these studies that he began to develop his own style, something he calls "One Man Tribe". This is not a reference to any sort of affiliation with a people, rather it symbolises his efforts to make solo drumming sound like a group of people. The popularity of his performances on Senegalese national television and his acceptance among the musical community of Senegal and other countries in Africa are proof of how successful he has been in this endeavour. 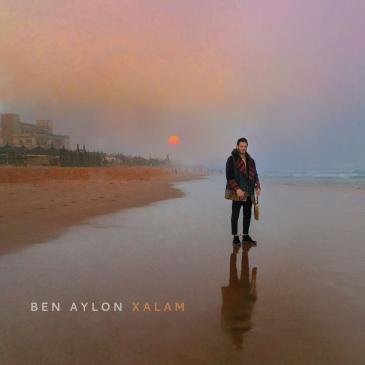 "With the recording of 'Xalam', Ben Aylon has created an album that crosses both physical and cultural boundaries," writes Richard Marcus. "That he uses his talents to showcase not only the musicians who inspired and taught him, but those he admires and appreciates the most, says as much about him as a human being as it does about his music"

All of this provides a partial answer to the question of how a guy from Israel came to be recording with, and befriending, what many would consider to be the royalty of African music, including the famed Youssou N'Dour, the legendary Senegalese percussionist Doudou Ndiaye Rose – considered the modern master of the sabar – and his son Aly.

The album's opening and title track, "Xalam", could be said to epitomise the meeting of what at first glance would be two cultures with little or nothing in common – Israel and Senegal. The xalam is one of the oldest stringed instruments in western Africa with its origins dating back to the ancient Malian kingdoms. Pronounced "Khalam", it sounds identical to that of the root of the Hebrew word for 'dream'.

Maybe this is just a coincidence, one of the many linguistic quirks that have been known to pop up around the world, but it also seems like a portent that something special will occur on the album. Listening to the first track only reinforces that feeling. Co-written by Aylon and Doudou Ndiaye Rose, this instrumental piece features the entire Ndiaye Rose clan – the father and his two sons – playing percussion, while Aylon plays the xalam and djeli ngoni.

The layers of percussion intertwine seamlessly with the plucked instruments for a sound that is both uplifting and inspiring. Unlike some popular music where everything is mushed together to form an intimidating wall of noise, we hear each individual in the same way we'd hear a character in a play speaking their lines. They each have something to say and are allowed to give full expression to that voice.

While the six instrumentals on the recording are wonderful showcases for both Aylon's and the Rose family's prodigious talents, the tracks featuring the various guest vocalists are some of the album's highlights. Two of them feature icons of Malian music; the late Khaira Arby and the equally wonderful Amy Sacko.

For both Arby's song, "Alafia", and Sacko's "Jonibenina", Aylon has created music to accompany lyrics written by the two singers. Both songs also reflect the improvisational spirit of the album – Arby was recorded in a hotel room in Worms, Germany (where the previously mentioned lamps were used as microphone stands) and Sacko was recorded at the foot of the Rock of Gibraltar looking out towards the mountains of Morocco.

For "Alafia", Aylon created music that suitably highlights Arby's vocals. While the music is intricate and interesting, its purpose is to provide a backdrop for her remarkable and expressive sound. There is no attempt to smooth out the rough edges Arby is famous for, and we're left with a moving and fitting tribute to this great singer. If you've never had the opportunity to appreciate her music, this song will send you searching for more.

"Jonibenina" introduces the listener to Sacko's haunting and captivating voice. Again, Aylon has provided a stunning context for the singer. The music has a dream-like quality that accentuates the wistful sound of the vocals and helps carry the listener to another time and place. You can almost visualise their recording location – staring off across the Mediterranean to North Africa. If you let yourself sink into the song you can smell the sea air and see the slight heat haze rising from the faraway coastline.

The third song with a guest vocalist is "Hulem Belibe" featuring Ethiopian/Israeli singer AvevA. Primarily accompanying her on the ngoni, Aylon has created music which ties the eastern African influences Aveva brings to her singing to the West African instruments of Mali and Senegal with which he is so familiar.

This song is not only beautiful, but a sign of hope in a troubled world, bringing together the multitude of cultures represented by the performers. It's not often you hear anything that so effortlessly combines Israel with East and West Africa. If only it were that simple all the time.

Algeria‘s regime is again cracking down on anti-fracking activists and the unemployed in the country‘s south. Yet EU countries remain keen to scale up their energy cooperation ... END_OF_DOCUMENT_TOKEN_TO_BE_REPLACED

Anti-Semitic motifs have no place at Germany’s documenta art show or anywhere else in the world, stresses Meron Mendel, director of the Anne Frank Educational Centre in Frankfurt ... END_OF_DOCUMENT_TOKEN_TO_BE_REPLACED

Fifty-five years after Israel began occupying Palestinian lands, it is more difficult than ever to imagine a way out. The seeds of the two-state solution that were planted by ... END_OF_DOCUMENT_TOKEN_TO_BE_REPLACED

Yazan Khalili is spokesman for The Question of Funding, a collective of artists taking part in the leading German contemporary art festival Documenta 15. Here, he responds to ... END_OF_DOCUMENT_TOKEN_TO_BE_REPLACED

When times are tough, the exchange of ideas and perspectives becomes especially important. It takes dialogue. And at Deutsche Welle, we need distributors and cooperative partners ... END_OF_DOCUMENT_TOKEN_TO_BE_REPLACED

Every week, Jewish, Christian and Muslim youths meet to sing together. And they do so in the middle of a city where Israelis and Palestinians are often at loggerheads. Anja Koch ... END_OF_DOCUMENT_TOKEN_TO_BE_REPLACED
Author:
Richard Marcus
Date:
Mail:
Send via mail

END_OF_DOCUMENT_TOKEN_TO_BE_REPLACED
Social media
and networks
Subscribe to our
newsletter