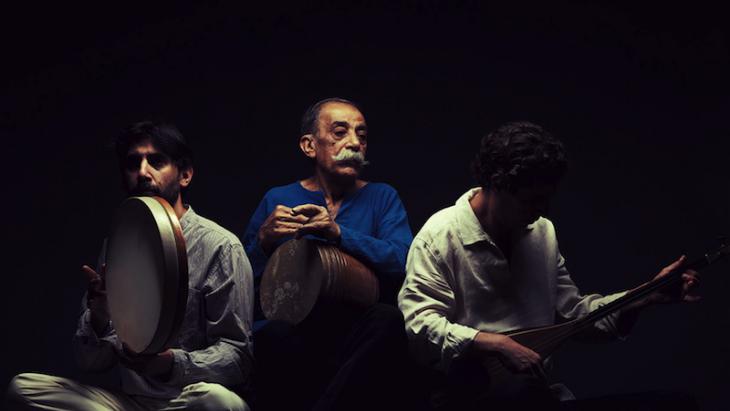 In Western music, percussion generally supports a singer or other musical instruments, rarely playing a starring role in its own right. "Dawar", the latest recording from Trio Chemirani, turns this notion on its head. Richard Marcus listened to the album and was astounded by the diversity of sound and feelings that three musicians are able to create using just a few instruments

Percussion instruments aren't normally something you'd think of as playing a leading role in a song. Usually percussion players are the ones buried at the back of the stage tapping out a rhythm most of us don't pay any attention to while the lead musicians play the melody. However, the further away you travel from pop or European orchestral music, the more the relationship between beat and tune changes. While it's true that rap and hip-hop both rely heavily on rhythm to drive their songs, in those instances, the pulse is driving the lyrics and is not the primary means of communication.

However, music in which the percussion is the primary focus, creating both the melody and the rhythm, is something not often heard anywhere. On the latest recording from Trio Chemirani, "Dawar" (The Universal Rhythm), on the Harmonia Mundi label, we are introduced to a world of almost pure rhythm.

Rooted in classical Persian music, the trio expands upon this base to include sounds and feelings of traditions from around the world and to create something that resonates not only in the body but the spirit.

The trio is made up of father Djamchid Chemirani and his two sons Keyvan and Bijan. While the elder Chemirani is a trained classical Persian musician, he has not limited himself to that genre alone. In 1985 he worked with famed British director Peter Brook on his production of the Mahabharata, the epic Indian tale of the lives of the gods. Influenced by both their father's music and his willingness to explore other forms of expression, both sons spent time learning about other musical traditions. However it wasn't just music they were interested in. They also studied language and how the speech patterns shared by different cultures shaped music when different musicians worked together.

A synthesis of three men's expertise 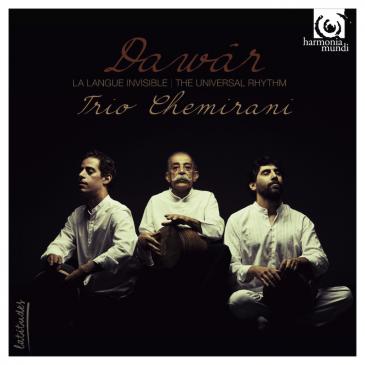 "While each listener may respond in his or her own way depending on their own backgrounds, each will find something in the music with which they can identify," writes Richard Marcus about Trio Chemirani's album "Dawar"

"Dawar" is a synthesis of the sons' studies and the father's musical heritage. While each of the three men play the zarb (or tonbak), a traditional Persian goblet shaped drum, the younger Chemirani also play the daf, a Persian hand frame drum. Occasionally, the percussion is augmented by Keyvan's playing of the santur, a Persian hammered dulcimer, and Bijan's playing of the saz (or baglama), a long-necked, four stringed instrument.

On four of the CD's 18 tracks, the opening and title piece "Dawar" and the tracks "To Bandegui", "Yade Saman" and "Arezoust", Djamchid recites extracts from two famed Sufi poets/mystics. The latter is an extract from a poem by Rumi, while the first three are taken from works by Hafiz, the pen name for the fourteenth-century Persian poet Shamseddin Mohammad. While the recitations are in Farsi, the sound of his voice combined with the music communicate just as clearly to those not conversant with the language as those who speak it fluently.

And that is the point of this music. It creates a universal rhythm that translates into a universal language. At our core, we all believe in the same things, and the songs on this disc, whether with lyrics or not, manage to tap into those feelings. While each listener may respond in his or her own way depending on their own backgrounds, each will find something in the music with which they can identify.

Listening to the three men play, you can't help but be astounded by the diversity of sound and feelings they are able to create using so few instruments. Each song is like an elaborate tapestry woven out of rhythmic patterns to create an image of beauty and splendour. You can almost see them creating the image while you listen. While one of the three lays down a foundation, the other two proceed to entwine layer upon layer of patterns and sound through and around it. The result is a kaleidoscope of textures as brilliant to the ear as colours are to the eye.

Music with a deep impact on the listener

Naturally as each song builds, the intensity level of the piece – especially the instrumentals – tends to increase. Some musicians don't seem to be concerned about the impact this can have on their audience and allow the music to increase in power to the point of discomfort. The Chemiranis are much more sensitive to the impact their compositions can have on a listener.

Just as it builds to the point where you think you won't be able to tolerate it much longer, they bring in one of the two stringed instruments as a respite. While both the santur and the saz are primarily rhythmic in nature, they change the atmosphere of what's been created sufficiently to bring us back from the edge of a precipice. It's almost as if there's only so much wonder we can tolerate, and these two instruments are able to bring us back to earth.

The quality of the music created by Trio Chemirani on "Dawar" is even more incredible when you think that only the three of them, with no overdubs or other common production techniques, are creating the sounds you are hearing. As you begin to understand the complexity of what they are doing, your amazement will only increase. That six hands can create not only something so beautiful, but so incredibly intricate, using such simple hand drums and basic stringed instruments is astonishing.

If you think that percussion is something that just supports an overall song, or that hand drums could never create a piece of music that can stand on its own, than listening to "Dawar" by Trio Chemirani will be an eye-opening experience. However, it's not just the fact that they create amazing pieces of music with percussion alone that makes this disc so remarkable, it's what these songs are capable of doing to the listener. Prepare to be transported by their international language of rhythm and the dialogue with the cosmos it creates.

Home
Print
Newsletter
More on this topic
Interview with Michèle Claude: The wonderful world of muwashshahatAlbum review: "Mountain Melodies" by Quraishi: Keeping the voice of Afghanistan aliveInterview with Ramin Sadighi from the Iranian music label Hermes Records: The fine line between what is permitted and what is notInterview with the Iranian theatre director Amir Reza Kohestani: "In Iran, art fills a void"
Related Topics
Iranian music, Musical worlds
All Topics

The protests in Iran have entered their third week with no indication that Tehran is prepared to address the demands that are echoing through the streets. Radio Farda’s Hannah ... END_OF_DOCUMENT_TOKEN_TO_BE_REPLACED

Just as the Islamic Revolution fundamentally changed Iran 43 years ago and had an impact far beyond the country's borders, the current wave of protests sweeping the country is set ... END_OF_DOCUMENT_TOKEN_TO_BE_REPLACED

The death of Mahsa Amini at the hands of Iran's "guardians of morality" is only the latest, tragic example – in a neverending chain of state repression and excessive police ... END_OF_DOCUMENT_TOKEN_TO_BE_REPLACED

In "Iran. Die Freiheit ist weiblich", journalist Golineh Atai describes the dogged resistance of courageous Iranian women against the Islamic Republic and the mullahs who have ... END_OF_DOCUMENT_TOKEN_TO_BE_REPLACED

Iranian artist Parastou Forouhar has lived in Germany since 1991. Full of rage, just like the protesters, she hasn't yet given up on the idea of justice. By Julia Hitz END_OF_DOCUMENT_TOKEN_TO_BE_REPLACED

Fariduddin Attar’s "The Conference of the Birds", one of the seminal works of Islamic mysticism, has recently been published in sumptuously illustrated German translation. It ... END_OF_DOCUMENT_TOKEN_TO_BE_REPLACED
Author:
Richard Marcus
Date:
Mail:
Send via mail

END_OF_DOCUMENT_TOKEN_TO_BE_REPLACED
Social media
and networks
Subscribe to our
newsletter