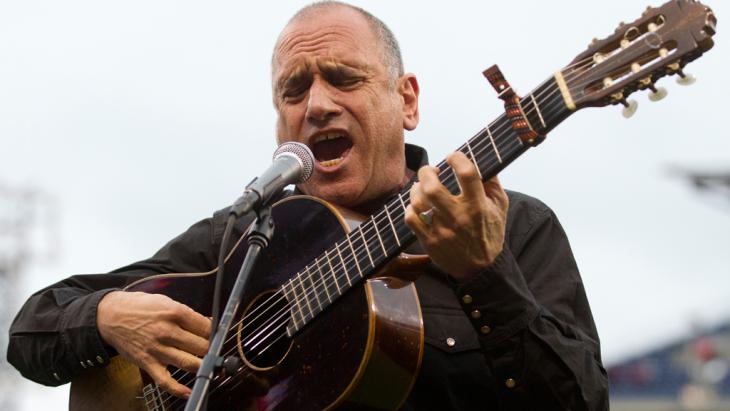 Album review: "East Jerusalem/West Jerusalem" by David Broza
"A combined effort of the mind, the heart and the soul"

David Broza is one of Israel's most popular and best-selling recording artists and a long-standing supporter of the peace movement in his country. His latest album "East Jerusalem/West Jerusalem" features artists from Israel, Palestine and America and was recorded in a Palestinian-owned recording studio in East Jerusalem. Richard Marcus listened to the album and spoke to the artist

There are some divides so wide and deep that it is impossible to ever imagine them being bridged. To most outside observers, the one separating Israelis and Palestinians seems nigh on insurmountable. The invective and distrust on both sides is so deep and bitter that the chances of the two peoples ever finding common ground are remote if not impossible. Yet in spite of what seems to be impossible odds and the recent climate of escalated violence, groups and individuals on both sides are continuing to make the effort to find a way out of the morass dragging their respective people down.

During the recent horror in the Gaza Strip, a new group/page appeared on Facebook, "Jews and Arabs Refuse To Be Enemies". The page is dedicated to offering an alternative vision of the relationship between Muslims and Jews than the one usually portrayed in the media. Not only does the page show people standing side by side demanding peace, individuals have submitted pictures of mixed-race couples and friends holding signs proclaiming their ethnicity and the depth of their devotion/friendship. 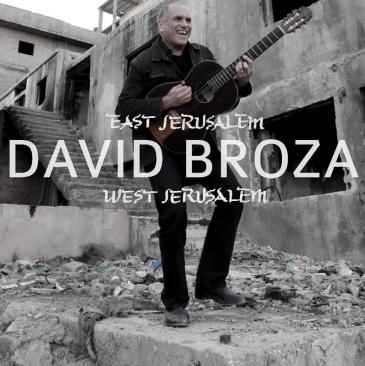 "Not only is it an amazing album of music, it is also a wonderful reminder of how music and culture can lay the foundation for bridge-building," writes Richard Marcus of David Broza's album "East Jerusalem/West Jerusalem"

However it's on a cultural level that some of the most direct and hopefully long-lasting actions are occurring in Israel itself. Organisations like "Heartbeat: Amplifying Youth Voices" and the Jerusalem Youth Chorus are bringing Palestinian and Israeli youths together to create music. While some of the songs they sing are of hope and peace, their existence is the strongest message of all.

David Broza has been working towards the same goals for almost 30 years. As a professional musician, he is one of Israel's most beloved and best-selling recording artists. As an individual, he has been a long-standing peace advocate. While he has often recorded and toured with Palestinian musicians, his most recent album, "East Jerusalem/West Jerusalem" not only had him working in East Jerusalem in a Palestinian-owned recording studio, but is a collection of songs that would bring the two musical worlds together.

Over the course of eight days, he, producer Steve Earle, musicians Mira Awad, Wyclef Jean, Muhammad Mughrabi (also know as G-Town) and others worked together on the album. Realising that visuals sometimes speak as loud as music, Broza also filmed the recording process and interviewed those involved. While the finished documentary premiered at The Woodstock Film Festival in Woodstock, New York, Broza is now raising money through crowdfunding site Indiegogo to create and distribute a DVD version of the movie.

I first heard "East Jerusalem/West Jerusalem" when it was released in January 2014. Not only is it an amazing album of music, it is also a wonderful reminder of how music and culture can lay the foundation for bridge-building. Broza has been touring the United States recently and took some time out from his busy schedule to answer some questions I had about the project.

David Broza: I have been working in the studio in East Jerusalem for the past 15 years and I had never managed to bring my Israeli musicians to record with me there or even just to come and hang out and take it easy. So I was determined to find the right project. When I thought of making this album, I was also hoping it would inspire local Palestinian musicians whom I know and we would create a mix of East West sound. So I had a couple of objectives in mind, and this was the right project.

You've recorded/performed with Palestinian musicians before. In what ways does this project differ from previous ones?

Broza: My previous projects were different musically. My first recording at the studio and with local Palestinian musicians was a soundtrack. The second was a Spanish album of mine called Parking Completo. I brought to the studio a great Spanish producer, Javier Limon. It was very different.

You have a long history in the peace movement in Israel. What role do you think culture – and specifically music – can play in helping bridge what to outsiders seems to be an almost impossible divide between the two peoples of the region? Or is that in itself an overly simple question?

Broza: I think the involvement of music and the arts in the social movements and peace movements is a great force of definition. Any time an artist connects with a cause, it magnifies the importance and the outreach. However, artists don't have to get involved; it's a very individual thing. As for the problem in the Middle East, it is so complex that it's not the art or the good will that will solve the problem. It all has to be a combined effort of the mind, the heart and the soul. In other words: politics, compassion and religion. These are the three elements that steer the way and direct the energy.

The songs on "East Jerusalem/West Jerusalem" are a mixture of originals and covers. What message do you hope people will take away from the original material on the CD?

Broza: The album is a beautiful collection of songs – some original and some covers. That's what it is. An album of music. Songs! The story behind the making of the album, once it gets discovered, should hopefully inspire others to do similar projects.

The covers were an interesting mixture of artists; Elvis Costello ("Everyday I Write The Book"), Roger Waters ("Mother"), Yusef Islam/Cat Stevens ("Where Do The Children Play"), Nick Lowe ("What's So Funny About Peace Love and Understanding") and Steve Earle ("Jerusalem"). Was there any particular theme you were trying to express through your choice of covers and was there any reason you chose songs by these specific artists?

Broza: The covers are primarily songs I have loved for many years and have always wanted to record myself singing. They also pertain to artists who, in part, boycott Israel and I think that by singing them, I am defying the embargo. I want to show that music prevails and triumphs and that it cannot be dragged into the political world.

You had quite an interesting mix of performers appearing in featured roles on the CD: Wyclef Jean, Mira Awad, G-Town (Muhammad Mughrabi) and Shaanan Street. While the first two have an international reputation in their own right, most people outside Israel and the West Bank/Gaza probably don't know the last two. Can you tell us a little about them and how you came to work with them?

Broza: The artists involved in the album are all friends of mine. With Wyclef Jean I go back a few years when we experimented in the studio together. I was hoping that he would come to the studio in East Jerusalem, but that never happened. I am still hopeful. G-Town is a very cool hip-hop band that has been jamming with me for several years. So when I realised that the song "Peace Is Nothing But A Word " was going to be featured, it made all the sense in the world to get them to record with me. Once I had the Arabic translation figured out, I knew I wanted to have an Israeli hip-hop artist, and Shaanan Street came up. Shaanan is a founding member of the Israeli band Ha'dag Nachash. They are very cool. I think the combination of all these created a beautiful multilingual track.

As David Broza says, music alone isn't going to solve the problems in Israel, however, it is certainly a good place to start. In the trailer for the DVD, Mughrabi and Awad talk about the difficulties of overcoming the inherent fear and mistrust between Israelis and Palestinians. Seeing and hearing them creating such amazing music together makes one think there could possibly be a future where this is no longer an issue. Listen to the CD, watch the DVD when it's released, and see how people who live in one of the most unsettled regions of the world are working to create a better world for themselves and their children.

Home
Print
Newsletter
More on this topic
Album review: "The Paris Session" by The Touré-Raichel Collective: Expanding each other's musical horizonsInterview with Daniel Barenboim: "The world is suffering from a lack of leadership"Protest and culture in Palestine: Make art, not warRavid Kahalani's Yemen Blues: ''Your language is my language''
Related Topics
Dialogue of Cultures | Intercultural Dialogue, Israeli-Palestinian dialogue, Middle East peace process, Musical worlds
All Topics

Her grandparents are Jews – born in Tunisia and Algeria. Director Cleo Cohen has now broken the silence about this with a very personal debut. By Nadine Wojcik END_OF_DOCUMENT_TOKEN_TO_BE_REPLACED

Every year in December, the team at Qantara.de takes a look back at the articles that proved most popular with our readers. This year is no different. Here is a run-down of the ... END_OF_DOCUMENT_TOKEN_TO_BE_REPLACED

Christmas in Bethlehem is usually a festive and colourful season. This year, festivities in the Palestinian town are set to return – but the COVID-19 pandemic is still casting a ... END_OF_DOCUMENT_TOKEN_TO_BE_REPLACED

Haifa is known for being Israel’s exemplary model of relative harmony between Jewish and Palestinian citizens. Its unique "Holiday of Holidays" is a joyous, multicultural event ... END_OF_DOCUMENT_TOKEN_TO_BE_REPLACED

May 2021 saw a deadly flare-up in Israel-Hamas hostilities, with eruptions of extreme violence in several of Israel's 'mixed' cities. Two weeks later, a broad-spectrum governing ... END_OF_DOCUMENT_TOKEN_TO_BE_REPLACED

Ankara is seeking to improve its relations with several states in the Middle East – such as the United Arab Emirates, Egypt and Israel. There are several reasons for this. ... END_OF_DOCUMENT_TOKEN_TO_BE_REPLACED
Author:
Richard Marcus
Date:
Mail:
Send via mail

END_OF_DOCUMENT_TOKEN_TO_BE_REPLACED
Social media
and networks
Subscribe to our
newsletter