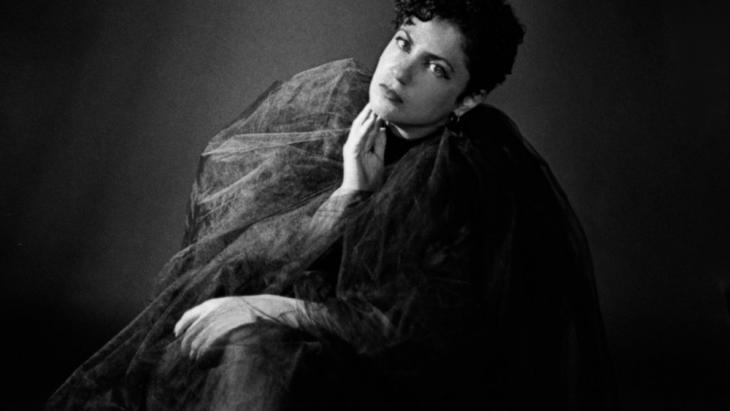 The coronavirus lockdown has hit performing artists especially hard, with the cancellation of live concerts denying them their major source of income and promotional opportunities. Emel Mathlouthi was one artist who took to recording a solo project. By Richard Marcus

Emel Mathlouthi was visiting her native Tunis when the international travel ban was enacted, preventing her from returning to her home in New York City. So she borrowed a guitar and took her laptop onto the roof of the building she was staying in and proceeded to record the two disc set The Tunis Diaries, for Partisan Records. While the recording doesn't contain any new material – disc one sees her re-working some of her most well-known songs and disc two features covers of other people's work – the solo performances are spellbinding and beautiful.

For those familiar with her work, the covers will probably be the biggest surprise. For those not familiar with her previously, the covers will provide an accessible introduction to a person who, while internationally acclaimed, is not be as well known in the English-speaking world as she deserves. While she has become known for her experimental work with electronics and dance in her music and performance, The Tunis Diaries is a nod to how she began – as a solo artist playing an acoustic guitar. 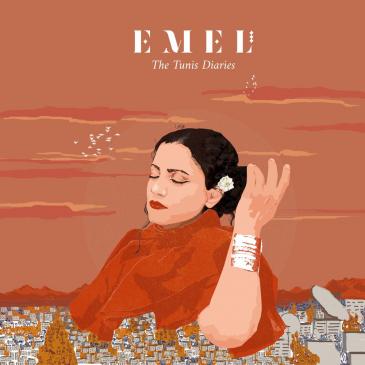 Richard Marcus: "The Tunis Diaries" is a collection of amazing renditions of an incredibly diverse range of material by one of today's most exciting performers. If you've never listened to Emel before, take this opportunity, you won't be disappointed. This may just be one of the best albums to come out of the worldwide lockdown during the pandemic"

With the music stripped down to the essentials of what she could create on her own, the listener focuses primarily on Emel's voice. An amazing instrument in its own right, here it is front and centre.

Experiencing her voice is something you can only struggle to describe. There don't seem to be any limits to her range; she is equally comfortable climbing the scale to the highest notes, as she is descending into the lower octaves.

The power of an anthem

Not once do you hear the annoying sound of someone pushing or straining to give a simulation of emotion. Instead she acts as the conduit for the content of the song. Whether it’s something she wrote or her interpretation of another person's material, she lets the music and emotion behind the lyrics flow through her without any interference.

It doesn't seem to matter how many times, or how many versions, you hear "Holm" (A Dream), the song that first brought her to international attention when it became the anthem of the Arab Spring during the Tunisian protests, it still packs the emotional wallop it did the first time you heard it. It's only fitting this is the first song on the recording.

While we might be used to hearing acoustic versions of "Holm", listening to her re-working some of her other work in this manner is something of a revelation. Songs like "Everywhere We Looked Was Burning", from the album of the same name, and "Princess Melancholy", from the release Ensen, become even more powerful stripped down to their bare essentials of voice and guitar.

While the idea of rock bands doing acoustic versions of their songs is something of a conceit, they hardly ever live up to the expectations, Emel's re-interpretations of her own music reveals just how powerful the song is and the true quality of her voice. Almost as fascinating are her interpretations of other people's material, if for no other reason than the diversity of the artists she's chosen to perform.

When you think of Emel, would you normally associate her with bands like Nirvana, Deep Purple, Rammstein, Placebo or System of a Down? Grunge, post punk, metal and hard rock are not genres that readily come to mind when thinking back over her work to date. Her versions of their songs might take them places maybe not intended originally, but what she brings to them adds an extra dimension that the originals lack.

The second disc begins with Emel's cover of Nirvana's "Something in the Way". Now Nirvana, and if I'm honest most grunge and metal are not my cup of tea, her versions of this song, and others, make me want to go back and listen to the originals again to see what I may have missed. She does such a remarkable job in creating something new out of them, they take on a new life as she marks them with the indelible stamp of her talent and drive.

Black Sabbath was probably one of the original metal bands and Emel has chosen to cover one of the songs that made them famous, "Sabbath Bloody Sabbath". She makes the song into a kind of lament on the human condition and it chills you in a way the original never did. The same goes for her versions of Placebo's "Every You and Every Me" and "Aerials" by System of a Down.

What's remarkable about these covers is how much Emel has been able to create something new, while retaining some of the original intent of the material. However, while I appreciate her versions of these songs, and enjoyed them immensely, the covers of David Bowie's "The Man Who Sold The World" and Leonard Cohen's "One Of Us Cannot Be Wrong" stand out head and shoulders above the rest.

On both songs Emel has effortlessly tapped into the deep emotional well the originals contained, while adding even deeper layers of meaning. Being familiar with both songs in advance, you'd think you'd be prepared for the depth of feeling they generate. However, her versions are almost heartbreaking in their intensity and remind us of just how great both the songs and songwriters were.

The Tunis Diaries is a collection of amazing renditions of an incredibly diverse range of material by one of today's most exciting performers. That she recorded these songs on her own, on a rooftop in Tunis (you can hear birds singing in the background on "Holm") makes them even more remarkable.  If you've never listened to Emel before, take this opportunity, you won't be disappointed. This may just be one of the best albums to come out of the worldwide lockdown during the pandemic.

Tunisia has launched a successful transition to democracy, but difficult economic and social times lie ahead. According to political scientist Said AlDailami, Europe should focus ... END_OF_DOCUMENT_TOKEN_TO_BE_REPLACED

Mass protests began in Egypt on 25 January 2011. They triggered the overthrow of long-time ruler Mubarak. Ten years later, many human rights activists and journalists are in ... END_OF_DOCUMENT_TOKEN_TO_BE_REPLACED

Mass protests began in Egypt on 25 January 2011. They triggered the overthrow of long-time ruler Mubarak. Ten years later, many human rights activists and journalists are in ... END_OF_DOCUMENT_TOKEN_TO_BE_REPLACED

Recent unrest shouldn't come as a surprise to anyone who's followed Tunisia's trajectory. The image of the North African country as the only "survivor" of the uprisings in the ... END_OF_DOCUMENT_TOKEN_TO_BE_REPLACED

Ten years after the start of the Arabellion in North Africa and the Middle East, many view the movement as a failure. But rather than being over, it has now entered a more mature ... END_OF_DOCUMENT_TOKEN_TO_BE_REPLACED

M’hamed Oualdi presents the story of a manumitted-slave-turned-dignitary in the Ottoman province of Tunis and the posthumous conflicts over his estate as a case study to ... END_OF_DOCUMENT_TOKEN_TO_BE_REPLACED
Author:
Richard Marcus
Date:
Mail:
Send via mail

END_OF_DOCUMENT_TOKEN_TO_BE_REPLACED
Social media
and networks
Subscribe to our
newsletter