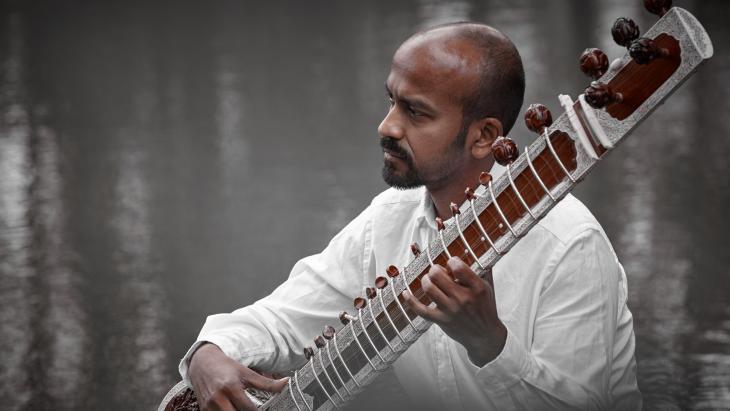 Album review: Hindol Deb's "Essence of duality"
Beyond the exotic – for a new East-West dialogue

For Western listeners, the sound of the sitar is perhaps the most cliched musical symbol of India. Sitar player Hindol Deb, who lives in Cologne, Germany, has just released his debut album, which explores new ways of combining the Hindustani long-necked lute with jazz. Stefan Franzen had a listen

The head of sitar player Hindol Deb emerges from a vortex of orange colour, mirrored on an invisible axis – this is the striking cover of his latest CD "Essence of Duality". The concept of duality is at the core of the album, both musically and figuratively.

"It started with the duality of two styles of music," explains Hindol Deb. "On the one hand, my classical Indian background, which I brought with me to Germany, and on the other, music built on harmonies. Jazz is too fuzzy a term for me. I had wanted to bring these two worlds together ever since I listened to the late night shows on the radio in 10th grade. But when I came to Germany, I realised: it's not that easy. Something had to change in me too, in my head, so that I could get into the Western philosophy of life, of which music is only one part."

Hindol Deb comes from a West Bengali family and grew up in Delhi. He was taught North Indian Hindustani music on the sitar by his own father. Ever since Ravi Shankar taught the Beatle George Harrison to play the instrument, the sitar has become a symbol of exoticism and has been used countless times as an ornament in jazz and pop. 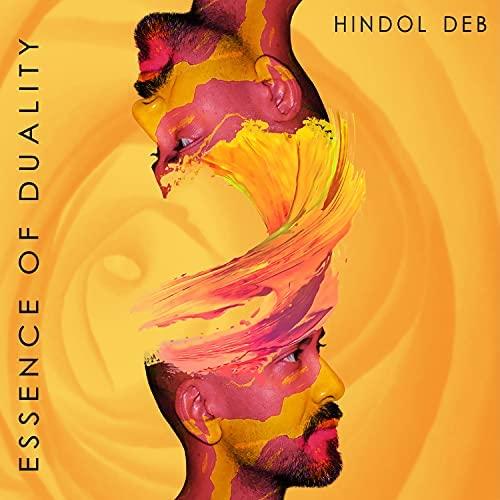 Away from the cliche: ever since Ravi Shankar taught the Beatle George Harrison to play this instrument, the sitar has become a symbol of exoticism and has been used countless times as an ornament in jazz and pop. "It's true that most people have a certain sound in mind when it comes to the sitar," admits Hindol Deb. "The focus has always been on the sound, and not on what was actually played. It was just meant to convey an image of India to Western listeners. But it has been years now; there has been a lot of exchange through migration, and it is time to explore new opportunities for crossover"

But that was not enough for Hindol Deb when he began teaming up with German musicians in 2012, relocating to Cologne just a few years later.

"It's true that most people have a certain sound in mind when it comes to the sitar," he admits. "The focus has always been on the sound, and not on what was actually played. It was just meant to convey an image of India to Western listeners. But it has been years now; there has been a lot of exchange through migration, and it is time to explore new opportunities for crossover."

He has implemented these ideas on his album "Essence Of Duality" with a jazz quartet, in which he gives all the musicians equal space to develop.

His ensemble consists of double bass player Christian Ramond who has spent time in India, drummer Jens Düppe, and his long-time companion Clemens Orth on piano, with whom he has not only arranged many pieces, but who also shares his own artistic and philosophical convictions.

Ukrainian Tamara Kukasheva adds a touch of vocal spice to several of the titles. So, what do the new routes to crossover described by Hindol Deb look like in concrete terms?

The Hindustani music system is composed of a large number of what we would call scales, the "ragas", which are played at certain times of the day or year, and evoke very particular moods among listeners. Hindol Deb does use ragas, but in his encounter with Western music he explodes their strict system.

"I often use ragas outside this assignment to certain times of the day or seasons, sometimes I also relate two or three ragas to each other in a composition. I combine them with familiar European cadences. While I compose, I also change the notes of the raga scale slightly, which also modifying the underlying harmonies. In this way I can achieve completely different timbres. Depending on the piece, even Indian listeners can find it hard to recognise the raga being used."

One example of such a composition is "Unknown Voyage", which is based on the raga Purvi, but which Hindol Deb has pretty much put through the wringer. The composition "Desert Clouds", on the other hand, presents the rainy season raga "miyan ki malhar" as largely unchanged and is less complex than melodic.

The sessions for Hindol Deb's album "Essence Of Duality" were not without their problems. The German musicians had their difficulties, especially with India's complex polyrhythms, the talas. Hindol Deb reports with a smile how they continued to "believe in their beat" for a very long time during the rehearsals.

The rhythmic confusion is taken to extremes in the appropriately titled piece "Fragmented Within", in which the beats change bar by bar and different metres overlap. One of the most beautiful pieces on the album "Essence Of Duality" is certainly "Journey To Kedarnath", which traces a journey to the Himalayas. Hindol Deb has not only taken the Kedar raga as his starting point, but also tapped into a quite unexpected source, namely a bass line by the Esbjörn Svensson Trio.

Hindol Deb has been living in Germany for five and a half years now and has dabbled in almost every musical genre. This inevitably raises the question of whether he has experienced an insurmountable culture clash somewhere?

He cites an example from New Music: "During my studies at the Hochschule für Musik in Cologne, I took part in a project with more than a dozen musicians, it was music for the theatre, notated in diagrams. Everyone played at the same time, there were no notes, only sound. I thought to myself: 'Oh my God, what am I doing here?' There was no chance of my sitar being heard, it was like a black hole sucking up my instrument's entire sound!"

There is no such danger on "Essence of Duality": HindoLDeb's debut album is a well-balanced work that allows all instrumentalists to be heard and, precisely because of this, succeeds in presenting multiple facets of a new East-West dialogue.

Recent efforts to rehabilitate Assad are setting a damaging precedent for accountability, just as the international community is expressing the need to hold Russia to account for ... END_OF_DOCUMENT_TOKEN_TO_BE_REPLACED

Nouara may be 65, but she is ready to join thousands of others who burn their ID and pay traffickers for the chance of a new life in Europe. Zineb Bettayeb reports END_OF_DOCUMENT_TOKEN_TO_BE_REPLACED

Education for girls and women is still possible in Afghanistan, says Reinhard Eroes of the Kinderhilfe Afghanistan initiative. In interview with Elisa Rheinheimer, he talks about ... END_OF_DOCUMENT_TOKEN_TO_BE_REPLACED

Locals in the Middle East have said European critics are showing bias and hypocrisy when they condemn Qatar. Observers agree that Qatar has had to deal with more criticism than ... END_OF_DOCUMENT_TOKEN_TO_BE_REPLACED

In Doha, Arabs from Morocco, Tunisia, Egypt and Algeria are gathering to celebrate the first ever FIFA World Cup to be held on Arab soil. The criticism from Europe? Over the top, ... END_OF_DOCUMENT_TOKEN_TO_BE_REPLACED
Author:
Stefan Franzen
Date:
Mail:
Send via mail

END_OF_DOCUMENT_TOKEN_TO_BE_REPLACED
Social media
and networks
Subscribe to our
newsletter