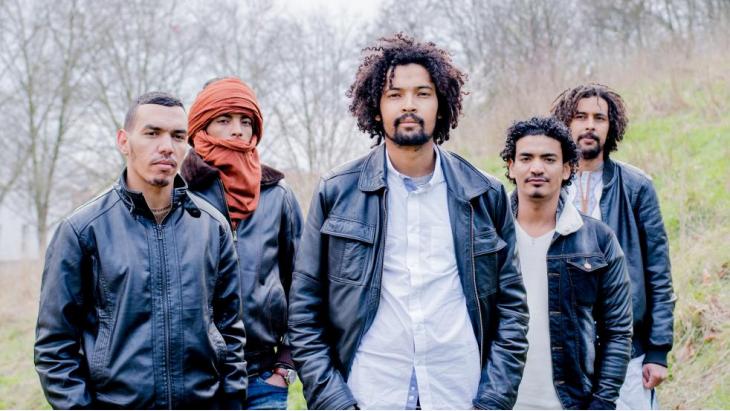 "Aboogi", on the City Slang label, is the latest release from Imarhan. Hailing from southern Algeria, Imarhan are one of the many bands that have emerged from the Tameshek diaspora. They see their music as a chance to preserve the culture and history of their people. By Richard Marcus

In early 2019 Imarhan built the first professional recording studio in their home city of Tamanrasset and named it for the traditional living structures the Tamashek once used when travelling the caravan routes: 'aboogi'. Calling the album the same name not only references the cultural history of their people, but points to the feelings of impermanence felt by so many indigenous people around the world. For the aboogi were not permanent structures, but were taken down and moved with the people as required.

Like other Tamashek musicians, however, this band is definitely here to stay. While the outright wars against their people have abated, they still face even greater economic hardship than others in the region. Having lived so long in the desert, being forced to relocate into metropolitan areas with little or no hope for the future has created a vacuum that swallows many of the current generation.

This is, of course one of the major reasons bands like Imarhan exist. Many of the people who fought for the extremist forces in Northern Mali, forces that targeted Tamashek musicians, were disaffected youth. The extremist leaders offered them money and weapons, gave them a purpose, no matter how twisted.

Through their music Imarhan hopes to help counter the influence of these and other forces that prey upon their people. The music is meant to both instil pride and serve as a reminder. Pride in who they are as a people and a reminder of the values they hold dear. Values that differ widely from those being promoted by those extolling violence. 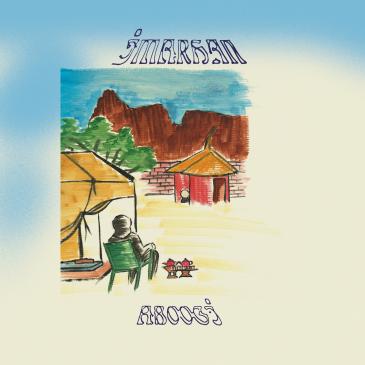 Music with a mission: many of those who fought for the extremist forces in Northern Mali, forces that targeted Tamashek musicians, were disaffected youth. Through their music Imarhan hopes to help counter the influence of these and other forces that prey upon their people. The music is meant to both instil pride and serve as a reminder. Pride in who they are as a people and a reminder of the values they hold dear

Imarhan isn't just looking to the past, however, in order to inspire their people. Traditions are all very well and good, but they can also tie you in place and make you blind to the reality around you.

The nomad life is gone – caravans of camels no longer carry trade goods across the deserts. That doesn't mean, however, that lessons learnt about respect for the land and each other have to be discarded.

A love of place and people

Melding past with future also means looking beyond the horizon for influences and inspiration – to other people who share in your struggle but offer a different perspective.

On Aboogi Imarhan have done just that by reaching out to Welsh singer Gruff Rhys. He joins the band on the song "Adar Newlan", where he sings in his native Welsh about the value of kinship.

Like the Tamashek, the Welsh have a long history of having their language and culture attacked by invaders, so this is not an idle expression of kinship. Indigenous people around the world have much in common: no matter how odd it might sound to us, this is a mixture that makes sense.

The song is an interesting mix of styles and doesn't sound like the typical desert blues track we're used to hearing. Once you move past some of the differences in style and arrangement, the similarities in feeling and tone become apparent.

Apart from the fact that it is sung in Welsh, the piece expresses the very love of place and people extolled by much Tamashek music. This type of universality is not only important for the members of Imarhan as musicians – it means they aren't stagnating artistically – it is also important for their culture as well. Finding complimentary influences that speak to the same subjects ensures growth and regeneration.

They are also joined by guests who live closer to their home than Wales. Sulafa Elyas is a Sudanese singer who has collaborated with Imarhan previously. On this album she contributes a haunting verse sung in Arabic to the song "Taghadart". It is another example of how the band is moving beyond simply being another desert blues ensemble.

The music is slower and more meditative than listeners may be accustomed to from bands from the sub-Saharan region. Even to non-Arabic and Tamashek speakers, the mournful nature of the music is apparent. The song whispers in our ears like a soft wind blowing across the desert sands. In the process it evokes images of twilight as the region settles down for the night.

"Giving space … to the sun and the sand"

Of course, Imarhan is still one of the premier performers of desert blues and they don't stray too far from those roots. The song "Achinkad" is a wonderful example of just how complex and entrancing the genre can be. The sound swells from its opening acoustic guitar and syncopated percussion accompanying vocals to included expanded vocal harmonies until an electric guitar takes centre-stage.

As the tune increases in intensity listeners are caught up in the passion of the song. You can hear what bandleader Iyad Moussa Ben Abderahmane means when he says the band wants to "give space to the wind and the natural energies, to the sun and the sand. We want to express their colours through music."

While that might seem like a tall order, trying to evoke such intangibles, listening to the music on this record will transport you to another place. It is an album of magic and wonder and an introduction to a world most of us know nothing about.

With Aboogi, Imarhan have established themselves as one of the premier bands of the sub-Saharan region. Like their contemporaries in the Kel Tamashek community, they are focused on the preservation of their culture and their people's place in the world. However, they also do an amazing job of incorporating music from beyond their community to make this a truly universal album.

For those who have never heard desert blues or experienced the beauty of the music from the region, Aboogi would be a great place to start. Be warned, once you start listening you won't want to stop – it is incredibly addictive.

Sultana Khaya, 41, has been peacefully resisting the Moroccan occupation of Western Sahara for many years. Because of her campaign to assert the self-determination of the Sahrawi ... END_OF_DOCUMENT_TOKEN_TO_BE_REPLACED

Since Spain abandoned its traditional neutrality towards the conflict in Western Sahara, Morocco has announced a "new phase" in relations between the two countries. But what is ... END_OF_DOCUMENT_TOKEN_TO_BE_REPLACED

An increasing number of government ministries in Algeria are announcing they will abandon French in future. They may be reacting to the mood among the population, but the move is ... END_OF_DOCUMENT_TOKEN_TO_BE_REPLACED

Russia's ranking on the World Press Freedom Index has fallen again over the Kremlin's wartime censorship of the Ukraine conflict. From Myanmar to Mexico, journalists continue to ... END_OF_DOCUMENT_TOKEN_TO_BE_REPLACED

The Algiers book fair has taken place for the 25th time, following a two-year break owing to the pandemic. Independent Algerian publisher APIC used the occasion to showcase its ... END_OF_DOCUMENT_TOKEN_TO_BE_REPLACED 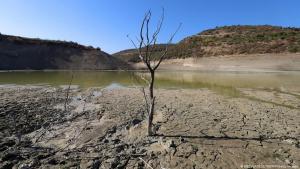 As challenges such as population growth and the end of the fossil fuel era loom large, not a single Arab regime is in a position to meet them. It is now incumbent upon Europe to ... END_OF_DOCUMENT_TOKEN_TO_BE_REPLACED
Author:
Richard Marcus
Date:
Mail:
Send via mail

END_OF_DOCUMENT_TOKEN_TO_BE_REPLACED
Social media
and networks
Subscribe to our
newsletter