“La Melancolie Royale” is an hour-long Sufi meditation on the reed flute by the great Turkish virtuoso Kudsi Erguner. Marian Brehmer on a Sufi musician with a mission

“Listen to the reed flute, how it tells its tale / How it bewails the pain of separation” – it is no coincidence that the Persian mystic and poet Rumi began the Masnawi, his 25,000-verse masterwork, with the ney as a symbol. After all, the ney, like almost no other Oriental instrument, represents the yearning of the soul for its origins, for a union with the divine source from which it originated.

For the Sufis, the ney serves as a perfect metaphor. In order to make this instrument, a reed is first torn from the reed bed, just as the human soul is uprooted and feels alienated in this world.

As the first step in transforming the reed into an instrument, the flute maker completely hollows out the reed, just as individuals on the path to perfection must empty themselves from all desires and egotistical traits. Then he takes a hot iron rod to bore holes in the emerging flute. This process stands for all the trials and tribulations the spiritual aspirant experiences on the path towards maturity. Only upon completion, after all this elaborate work, can the breath of the divine flute player flow through the body of the ney.

A listener to Kudsi Erguner’s new album – “La Melancolie Royale. Meditation Soufie” – might be inclined to think that the master has set humanity's existential journey to music. The ney virtuoso's album consists of six tracks, which celebrate the original sound of the reed flute in all its facets. For the most part, the sound of the instrument resembles that of a soft sigh, with delicate melodic lines and, to Western ears, a tonality that is unusually nuanced and characterised by many subtle ornaments.

In performing his instrument, Erguner, the neyzen, the name given to a ney player in Turkish, displays acrobatics with his breath and achieves a meditative state that gradually draws in the listener as well. Erguner’s playing exhibits enchanting beauty that immerses the receptive listener into a deep sense of spirituality. The virtuoso intentionally excludes other instruments from the performance. He wants to preserve the singularity of the ney and allow it to tell its own story. As a result the album is at once both mellow and ascetic. 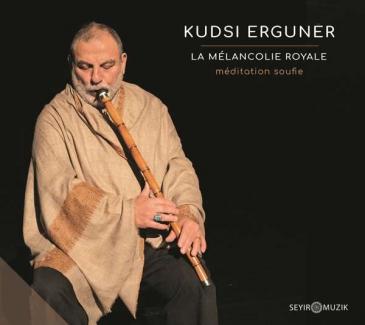 Ney music with a mission: as a flute virtuoso, Kudsi Erguner soon made a name for himself in Europe. Erguner collaborated with world music stars like Peter Gabriel and at the same time engaged in research into traditional musical cultures in regions such as North Africa, Afghanistan, and South Asia

Kudsi Erguner is one of the most famous ney performers to have made a name for himself on the world music scene. Born in 1952 in the eastern Turkish city of Diyarbakir to a family of musicians, Erguner was taught to play the ney by his father and his grandfather. Both were so well known in Anatolia as outstanding masters of their instrument: even today people in Turkey speak of the “Erguner school” of ney playing.

When he was seventeen, Erguner became a member of the Istanbul Radio Orchestra, and at 23, he moved to France to study architecture and musicology. In Paris, he founded the Mevlana Institute, where he taught classical music and the precepts of Sufism.

As a flute virtuoso, he soon made a name for himself in Europe. Erguner collaborated with world music stars like Peter Gabriel and at the same time engaged in research into traditional musical cultures in regions such as North Africa, Afghanistan, and South Asia. In the 1980s, he served UNESCO as commissioner for Turkish musical culture.

In 2008, as part of the Frankfurt Book Fair’s Turkish Guest Country Programme, Erguner headlined a highly-acclaimed concert in the Alte Oper in Frankfurt, where, together with his ensemble, he performed music both as composer and flautist in the traditional Turkish Sufi style to accompany poetry from Goethe’s East-West Divan. In describing Erguner’s accomplishments, the renowned World Music Central forum writes, “He has documented and revived an almost forgotten musical tradition and brought it to the notice of a Western public, thereby ensuring its place in the cultural heritage of Europe.”

All eyes in Turkey are on a court hearing scheduled for January 30 into a child abuse case that allegedly occurred with the knowledge of one of Istanbul's most powerful Islamic ... END_OF_DOCUMENT_TOKEN_TO_BE_REPLACED

Any reconciliation between Turkey and Syria’s Assad regime would have disastrous consequences for many Syrians, explains Syria expert Kristin Helberg END_OF_DOCUMENT_TOKEN_TO_BE_REPLACED

The poetry of Pir Sultan once prompted uprisings in the Ottoman Empire. To this day, Alevis identify with him. Rainer Hermann visited Mehmet Celebi, a direct descendant of the ... END_OF_DOCUMENT_TOKEN_TO_BE_REPLACED

There are signs of an imminent normalisation of relations between Turkey and Syria. This would allow Erdogan to score political points domestically before the upcoming elections ... END_OF_DOCUMENT_TOKEN_TO_BE_REPLACED

Turkey will mark the centenary of the proclamation of the Turkish republic in October. But 2023 will be an important year in another respect too: Turks will go to the polls in ... END_OF_DOCUMENT_TOKEN_TO_BE_REPLACED

END_OF_DOCUMENT_TOKEN_TO_BE_REPLACED
Social media
and networks
Subscribe to our
newsletter