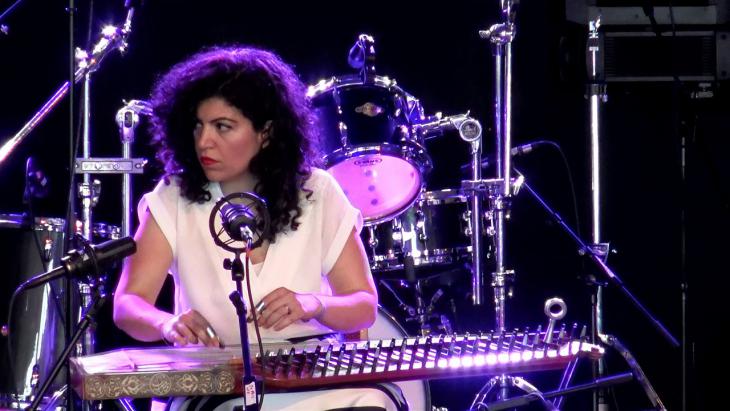 You would be forgiven for failing to derive anything positive from the title of Maya Youssef's latest album, ″Syrian Dreams″. After all, now in the seventh year of a vicious conflict, isn′t Syria more the stuff of nightmares? Youssef pushes back against the prevailing image, providing a glimmer of hope. Review by Richard Marcus

According to Youssef, the act of playing and creating music is a life and hope-affirming act. Syrian Dreams, released on the Harmonia Mundi label, is her journey through six years of seeing her country torn apart. Into it she has poured her memories of home and the feelings about the war and its impact upon the people of Syria. For her, music can be an antidote towards what is happening in not only Syria, but other troubled spots in the world as it brings people back to their humanity. It is her way of helping create a world where people can exist together in peace.

For those who think Youssef may be living a little too much in a dream world, you need to consider some facts about her. First, she is one of the few women who play her instrument of choice, the qanun (or kanun). She first heard the instrument when she was starting to study music and decided it was what she wanted to play. Normally the qanun is part of a much larger ensemble, but Youssef has promoted it to being a solo or lead instrument. This is a woman who doesn't let little things like accepted practices stand in the way of her dreams.

For those unfamiliar with it, the qanun is a 78-string zither played in the Middle East and especially in the Arab world and Turkey. The word ′qanun′ translates as ′the law′. Being the only instrument in traditional Arabic ensembles capable of playing all the notes in the Arabic scale on open strings and because the rest of the ensemble depends on it for setting pitch and tuning, the qanun lays down the law. 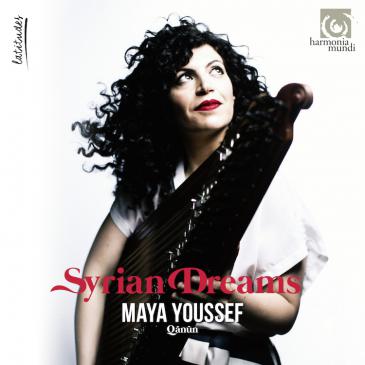 "With 'Syrian Dreams', Maya Youssef has created an album of music which remembers what Syria was and holds out hope for its restoration in the future. While difficult to listen to at times for its emotional strength, ultimately the album serves as a wonderful contrast to the way the country is currently being depicted as a place of perpetual darkness," writes Marcus


Its sound may be a little jarring to the ear initially – think of piano wires being plucked – and you'll be heading in the right direction. Yet, once you adjust to the different tonality, you quickly come to appreciate its beauty and diversity.

Youssef has also assembled a group composed of instruments and players, who compliment the qanun beautifully: Barney Morse-Brown on cello, Sebastian Flaig on percussion and Attab Haddad on oud.

You can hear how this accompaniment works right from the first song on the CD: "Horizon". Primarily a duet between the cello and qanun, listeners will be immediately struck by how well the instruments′ contrasting sounds compliment each other.

The plucked strings of the qanun's sharp and almost aggressive sound is smoothed out by the lush tones of the cello. It's like the latter is filling in the spaces left by the former's tonal range to complete each note played. Together the two almost sound like one.

However, the real power of the qanun is in its ability to startle. In fact Youssef creates an almost dissonant sound verging on the edge of chaos in the second cut on the disc, "Bombs Turn Into Roses". The title of the track is evocative enough on its own – a hope for a day when there will be the beauty of growing things again in Syria – but somehow Youssef is also able to recreate the tumult of the bombardment and bring us back to a moment of peace.

Truthfully, although this track is not even four minutes in length, it is incredibly difficult to listen to in places. Aside from the dissonance needed to create the right atmosphere to represent a bombing, the piece is also emotionally disturbing. At times you feel like your heart is going to jump out of your chest as you listen. Thankfully, as she turns the bombs into roses, Youssef does restore peace to the listener by the end of the song, but it's a difficult journey.

Of a Syria at peace

"The Seven Gates of Damascus" is by far the longest and most complex piece on the disc. It is a guided tour through the city via its seven gates. The gates are in and of themselves a history of the city, with the oldest dating back to Roman times. They also represent the diversity of both the city and the country, representing moments in time significant to both Muslims and Christians.

This beautiful piece of music captures the spirit of a Syria at peace, something for people to dream of restoring. That Youssef is able to accomplish this using instruments alone speaks volumes of her ability as both a composer and a musician. The emotional range demonstrated throughout the course of this album is breathtaking. Listening to this, as she shows us the current reality and her dreams for the future, you get the feeling that perhaps there is hope for a better tomorrow.

Into the seventh year of news reports on the horrors happening in Syria and with images of the mass exodus of refugees seared into our brain, it's increasingly hard to think of the country as anything other than a war zone. However, there's more to Syria than conflict.

With Syrian Dreams, Maya Youssef has created an album of music which remembers what Syria was and holds out hope for its restoration in the future. While difficult to listen to at times for its emotional strength, ultimately the album serves as a wonderful contrast to the way the country is currently being depicted as a place of perpetual darkness.

Any reconciliation between Turkey and Syria’s Assad regime would have disastrous consequences for many Syrians, explains Syria expert Kristin Helberg END_OF_DOCUMENT_TOKEN_TO_BE_REPLACED

There are signs of an imminent normalisation of relations between Turkey and Syria. This would allow Erdogan to score political points domestically before the upcoming elections ... END_OF_DOCUMENT_TOKEN_TO_BE_REPLACED

As Syrian camps housing families of Islamic State fighters get more dangerous, there are calls to bring children out, even if the mothers don't want to go. The idea of separating ... END_OF_DOCUMENT_TOKEN_TO_BE_REPLACED

Where are the measures to deal with the looming challenges facing the Arab world? In this commentary, Marwan Muasher warns that the region is in grave danger of falling behind ... END_OF_DOCUMENT_TOKEN_TO_BE_REPLACED

At the end of every year, the team at Qantara.de gives you a run-down of the ten most-read articles on the site over the past 12 months. Here is a quick overview of the stories ... END_OF_DOCUMENT_TOKEN_TO_BE_REPLACED

Social engagement is often motivated by religious factors. A new book explores the background to these community efforts and appraises how effective they are in helping to ... END_OF_DOCUMENT_TOKEN_TO_BE_REPLACED
Author:
Richard Marcus
Date:
Mail:
Send via mail

END_OF_DOCUMENT_TOKEN_TO_BE_REPLACED
Social media
and networks
Subscribe to our
newsletter