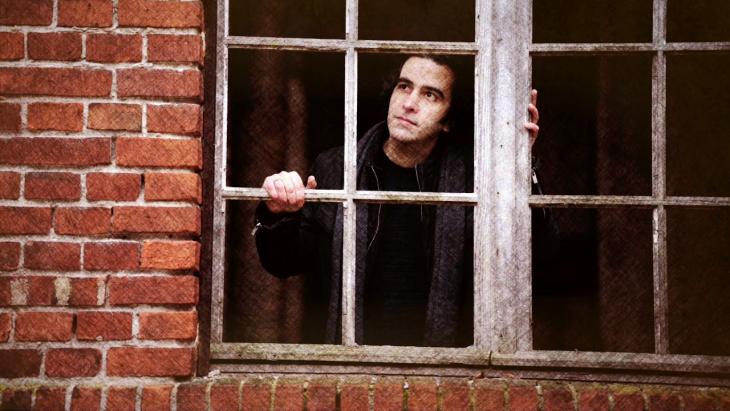 On the cover of his new solo album, "Unknown Nearness", Iranian kamancheh virtuoso Misagh Joolaee stares out through a paneless, old wooden window frame into the distance. His gaze – questioning, yet somehow full of longing – is turned both inward and outward at the same time. In this way, the photo adeptly encapsulates the philosophy behind Joolaee's solo album. "Unknown Nearness" not only revolutionises kamancheh playing techniques, but also examines the burning questions of an artist's existence.

These questions are inherent in the album's title. "There is an ambivalence to it that relates above all to the process involved in creating the pieces," explains the Berlin-based musician. "When I create something new, there is an urgency and pull that feels unknown and unusual, but at the same time near. After all, it all comes from inside me. You are impatient; wanting to explore that feeling."

He then quotes the author Ferdinand von Schirach, who once said that artists cannot be at peace inside and feel definite satisfaction, which is why they search for a way out, for a solution, through the creative process. However, they cannot ever fully find this solution, and if they did, they would stand still and would never want to search again.

After his last album, "Ferne", which won the prestigious German Record Critics Award ("Preis der deutschen Schallplattenkritik") in 2020 and featured percussionist Sebastian Flaig, Joolaee took the next logical step in exploring his instrument and returned to the most concentrated expression of the kamancheh, namely solo performance.

As a period of isolation, the coronavirus pandemic made this step even more logical. The result is a cycle of 12 pieces that draws an arc between Persian tradition and the enigmatic echoes of Western music such as flamenco or Johann Sebastian Bach. This is undoubtedly a unique style in his generation of young musicians with Persian roots.

Joolaee (pronounced "july") , who is 38 years of age and hails from the northern Iranian province of Mazandaran, learned the radif, the collection of old Persian melodic figures, on the European violin before switching to the kamancheh. This instrument, which is also known as the Persian spiked fiddle, delivers a sound rich in overtones. He also has an in-depth knowledge of Western classical music and Andalusian forms.

Joolaee has always been a seeker and an innovator without ever wanting to make an iconoclastic break from his anchoring in tradition. "My way of thinking and my language are deeply rooted in the radif. When I write a piece in a specific mode (dastgah), then I automatically use the short pieces of melody (gushehs) that have been handed down from generation to generation. My new contribution to all this is the playing techniques that I have invented and the rhythms that have never before been tested."

All of this is evident right at the start of "Unknown Nearness": with the track "Origins", his adaptation of a well-known melody from Mazandaran, he imitates the sound of the laleva flute. He achieved this sound after much explorative experimentation, ultimately finding an unprecedented combination of overtones and underlying tremolos.

In the up-tempo section, he develops incredible virtuosity using staccato techniques that create a thrilling, whirling gallop. He transferred this special whirlwind-like sound from the Persian hammered dulcimer, the santur, which he first encountered in the performances of Parviz Meshkatian, to the kamancheh.

Respect each and every sound

Parviz Meshkatian is a name that crops up again and again in conversation with Joolaee. He is a great admirer of the Iranian master, who passed away in 2009, and has dedicated "Vastness", the central – and longest – piece on the album, to him. "I have been familiar with the way he played the santur since my childhood, and it fulfilled me to such an extent that initially, I couldn't even imagine how it could possibly be topped. The word 'vastness' relates to his free improvisations, the way he combined various motifs and drew an expansive arc with highs and lows." Joolaee succeeds in achieving similar depth, similar inwardness, in this ten-minute track.

Achieving a balance in the conflict between this spiritual depth and new virtuoso techniques was a real challenge, explains Joolaee. One should never lose focus of the sound, he stresses, explaining that it is indispensable to respect each and every sound and to ask oneself whether the inclusion of a virtuoso passage in a piece is justified.

In his attempts to achieve this balancing act, it helped him to study another of his musical heroes, Paco de Lucia, to whom he dedicated the piece "Nightwind", which culminates in a rhythm borrowed from flamenco music. A classically trained Persian musician treading flamenco paths? It is certainly not the first combination one might expect! But Joolaee convincingly explains why it works.

"As a Persian musician, you immediately hear modes such as short, nava, and isfahan in flamenco forms such as the solea, the tarantas, or the farruca. They have common roots, and the founder of Arabo-Andalusian music in Cordoba, Ziryab, hailed from the Persian Empire. When I came together with my flamenco colleagues, they also noticed how good the smoky, scratchy sound of the kamancheh suited the flamenco sound – even more so than the guitar!"

This impurity and indistinctness, this brittleness – one could even say brokenness – is also what fascinates Misagh Joolaee about the human voice. He creates space for all this in a piece called "Deceived Heart", which is a moving musical version of a poem by the great poet Attar of Nishapur. These are verses about the yearning for a loved one that lead to a yearning for the divine. And this is where he comes full circle philosophically: the search for something higher can never end within the course of a life.

Joolaee has captured this realisation and really focused on it in two other pieces, "Thrownness" and "Longing": the way the bow touches the strings is a suitable image of what Heidegger once referred to as the "thrownness" of humans in their existence; for the inevitability of how humans have to accept their lives and the resulting question: "what next?" The answer to this question is an unfulfilled yearning that can best be expressed without words. Misagh Joolaee's kamancheh is a particularly beautiful vehicle for this answer.

Giessen, Eichsfeld, Kusel, Berlin – cars bearing old German number plates are the latest trend on the streets of Cairo. Many Egyptians regard the discarded plates as chic. What ... END_OF_DOCUMENT_TOKEN_TO_BE_REPLACED

Tunisia has been going through a severe economic and political crisis in recent years. More than one in three young people there are unemployed. For many skilled, qualified and ... END_OF_DOCUMENT_TOKEN_TO_BE_REPLACED

German imams have publicly expressed their solidarity with the women of Afghanistan. In a letter of protest, the clerics say that the Taliban regime's decree barring women from ... END_OF_DOCUMENT_TOKEN_TO_BE_REPLACED

At the end of every year, the team at Qantara.de gives you a run-down of the ten most-read articles on the site over the past 12 months. Here is a quick overview of the stories ... END_OF_DOCUMENT_TOKEN_TO_BE_REPLACED

Social engagement is often motivated by religious factors. A new book explores the background to these community efforts and appraises how effective they are in helping to ... END_OF_DOCUMENT_TOKEN_TO_BE_REPLACED

The government in the Netherlands, one of the last European nations to abolish slavery, has made an historic apology. But some feel that there is still a long way to go. By Ella ... END_OF_DOCUMENT_TOKEN_TO_BE_REPLACED
Author:
Stefan Franzen
Date:
Mail:
Send via mail

END_OF_DOCUMENT_TOKEN_TO_BE_REPLACED
Social media
and networks
Subscribe to our
newsletter