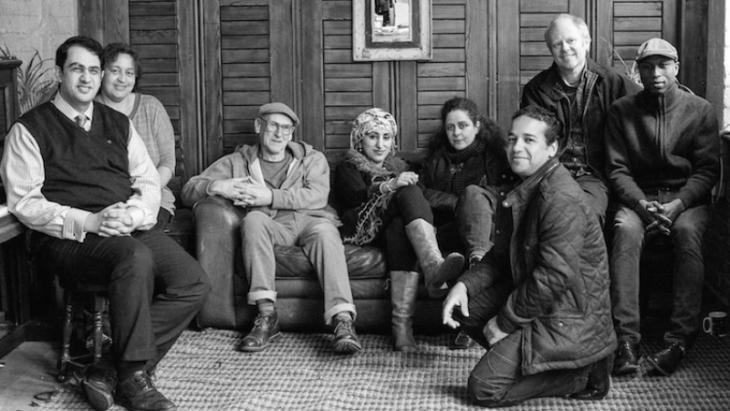 Rafiki Jazz′ latest album, ″Har Dam Sahara″, is one of those rare releases which manages to combine the music of multiple cultures to produce a sound that is both unique and harmonious. Review by Richard Marcus

Founded in Sheffield in the United Kingdom in 2006 Rafiki Jazz combines musical elements from cultures as diverse as West Africa, The Punjab, Pakistan, Hebrew, Arabic and other Middle Eastern and Asian sources. The musicians involved in the project and the source material inspiring the individual songs on the album reflect both the diversity and bridge-building this type of enterprise is able to accomplish. For example, how often to you hear an eleventh century Hebrew poem set to music evoking a Hindi raag as you do on the song "You Are Light"?

Of course the disc's title gives us a clue as to what we will find within. Translated from Urdu into English it reads, "In life's every moment there is always support". Here the moments are music and the support is the variety and texture of the different people and styles incorporated into each song. No piece stands on its own, yet each is made up of distinct individual sounds which have their own character and flavour. However, like all the best recipes – and in this case the music is a mixing together of ingredients to conjure up a treat for our collective palate – their tastes are enhanced rather than diminished in combination.

A meeting of minds 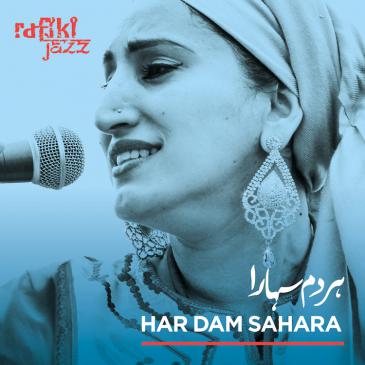 The group's name intimates that the music on Har Dam Sahara was always going to be a meeting of minds and styles in the quest for something new. "Rafiki" translates as friends and jazz has always been synonymous with freedom – at least freedom of expression.

Here we see not only individuals coming together in harmony, but the music they bring with them fitting together in beautiful symmetry, no matter how odd the juxtaposition of the various styles and cultures might appear.

Like all the best jazz the music on this disc is more about how the sounds come together, rather than the specifics of a lyric's meaning or a component's origins.

In this case each of the seven songs build from either one or two source materials and then weave tapestries of sound around them to further embellish and elaborate on the themes expressed in the original.

The fifth track on the recording, "Har Chand Sahara" is a perfect example of this in action.

While the song is a classic Sufi ghazal (a poetic form with rhyming couplets and a refrain with each line sharing the same meter) with lyrics based on the poetry of the late Shohrat Bokhari, the rendition we hear is derived from one created by Pakistani playback singer Nayyara Noor.

(In Bollywood style movies the songs are usually sung by singers other than the actors appearing on screen who are called playback singers).

However, this doesn't sound like any Bollywood number I've heard. Firstly, few contain the variety of instruments used on this song and secondly, it doesn't really move like most Bollywood songs I've heard.

It is far more contemplative and restrained than the dance numbers most of us associate with the genre. Sarah Yaseen and Avital Raz's vocals on the track weave a beautiful harmony which soars above the violin, tabla and flute providing the accompanying music, with an ethereal quality that lifts the spirits and sends thoughts inwards.

You can hear the same sort of re-working of material on the sixth song of the disc, "Jhooli Laal Qalandar". Here the band has reworked a traditional Qawaali Song, "Mustt Mustt" with lyrics based on the poetry of Bulleh Shah, written in praise of Sufi mystic Hazrat Lal Shabaz Qalandar. Yaseen sings the lyrics in Punjabi while guest Sarah Sayeed provides a English spoken word rendition. This is a beautiful and finely textured song which, with the inclusion of English lyrics, manages to convey both the spiritual and earthly side of this type of music. We hear how words which evoke human love can also be used to celebrate the connection with the divine and vice versa.

Of course the album doesn't just draw upon South East Asia for inspiration and this is reflected in both the first and last tracks on the recording. The opening song "Sunno" is written and performed by Senegalese musician Kadialy Kouyate and Yaseen. While Kouyate wrote the music and plays kora on the track, Yaseen wrote the lyrics. It's a beautiful, almost simple tune, with the resonate sounds of the kora gently supporting the vocals as they travel through their story.

Kouyate also wrote the seventh and closing track of the disc, "Cheikh Amadou Bamaba (Serigne Touba)", a tribute to the Sufi spiritual and pacifist resistance leader of the same name. In this song, as well as the first, we hear the influence of the West African Griot tradition – wherein future generations learn of, and are inspired by, somebody's history preserved in song.

Har Dam Sahara is one of those wonderful albums where you can sit and listen and be transported out of yourself. Notwithstanding most of the lyrics are sung in a variety of languages there is something inherently accessible about the sound and the music. You find yourself easily slipping into the reality Rafiki Jazz has created and being washed by their beautiful harmonies.

Not only have they created an album of wonderful music, they have also shown how a variety of cultures and people can come together to create something wonderful out of their diversity without anyone having to sacrifice personal identity. It is a valuable lesson for all of us in these days of division and intolerance.

The recent escalation of violence in Idlib is also a result of the increasing tensions between Turkey and Russia. The victims are those in Idlib, caught up in a hopeless situation ... END_OF_DOCUMENT_TOKEN_TO_BE_REPLACED

The 2015 Joint Comprehensive Plan of Action with Iran is in jeopardy. European governments should use the JCPOA’s dispute-resolution mechanism both to pursue immediate measures to ... END_OF_DOCUMENT_TOKEN_TO_BE_REPLACED

Many predominantly Muslim countries have penal laws against "blasphemy", "defamation of religion" and "apostasy". In practice they serve as highly effective weapons to settle ... END_OF_DOCUMENT_TOKEN_TO_BE_REPLACED

These days you might be forgiven for wondering whether international relations would be better served by artists than politicians. Iranian Kayhan Kalhor, a bridge builder from the ... END_OF_DOCUMENT_TOKEN_TO_BE_REPLACED

As we digest the details of Donald Trump's Vision for Peace, we need to ask ourselves just one question: does this draft guarantee an Israeli and a Palestinian baby born today ... END_OF_DOCUMENT_TOKEN_TO_BE_REPLACED

As expected the Trump administration released its Israeli-Palestinian peace blueprint on Tuesday, a plan that ignores the Palestinians at the expense of lasting peace. Middle East ... END_OF_DOCUMENT_TOKEN_TO_BE_REPLACED

Comments for this article: In life′s every moment

END_OF_DOCUMENT_TOKEN_TO_BE_REPLACED
Social media
and networks
Subscribe to our
newsletter