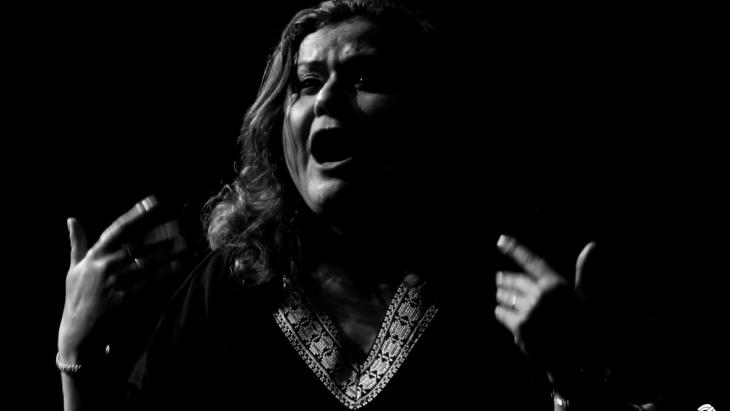 Album review: Reem Kelaniʹs "Why Do I Love Her?"
Sweet discomfort

As a prelude to the album she's currently working on, "This Land is Your Land", Reem Kelani has just released the four track EP "Why Do I Love Her" – recorded live at the Tabernacle in London. By Richard Marcus

"An autobiographical roundtrip between East and West and in between": while that might seem like a somewhat cryptic statement on the surface, a quick check of her biography reveals what Kelani means. Reem Kelani was born in Manchester England, but was raised in Kuwait and now lives in London. It seems like her route to music was as circuitous as anything else in her life. Not only is she an experienced literary translator, but she also graduated from Kuwait University as a qualified biologist prior to deciding upon a career in music.

However, while all of those, especially growing up in the liberal Kuwait of the 1970s and 80s where women singers and band leaders were common, might have been influences on her life and career choices, her Palestinian heritage is what has continued to inspire and influence her the most. Her past musical projects (her first release "Sprinting Gazelle – Palestinian Songs form the Motherland and the Diaspora" and her co-composition of "Cry Palestine") are an example of this impetus to sing about her people.

Of course this is typical of many artists who live in exile. However, there is something a little different, more intense, about Kelani's feelings. The lyrics to the title song, "Why Do I Love Her" – ʹherʹ being Palestine – were written after she was admitted to hospital on returning from visiting her extended family in Palestine. It seems that every time she visits she becomes ill. 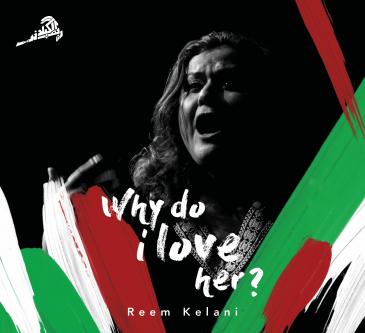 "Her heart is her earth…Her bosom… my mother": Kelaniʹs language calls to mind the way Native Americans and First Nations people talk about their relationship with their traditional territories. They're not just places they might once have lived, they have a deep connection with the land and to see it damaged or misused causes them actual physical pain

"By day, I’m unable to rest and by night, I’m unable to sleep. I often get a paralysing sense of ʹfree-floatingʹ anxiety mixed with sweet discomfort. The feeling of estrangement is heightened when in a car at night, and I see intertwined roads and villages brutally sectioned by settlement clusters, illegal under international law."

The song "Why Do I Love Her" is a thing of passion and stark beauty. It opens with a stunning piano solo from Bruno Heinen which is both harsh and haunting at the same time.

About a third of the way into the song he's joined by the rest of the band (Ryan Trebilcock on double bass and Antonio Fusco on drums) and then Kelani begins to sing.

While the song's lyrics are in Arabic, there's no mistaking the passion and anguish in her voice as she talks how she feels when she is in Palestine.

The majority of the song details how the circumstances under which people live creates feelings of suffocation and claustrophobia: "Her sky scares me/Her air chokes me/Her closeness shreds me".

Yet the final two lines make it clear, no matter what, how much she loves the land of her people. "Her heart is her earth…Her bosom… my mother." Kelani's language calls to mind the way Native Americans and First Nations people speak about their relationship with their traditional territories. They're not just places they might once have lived, they have a deep connection with the land and to see it damaged or misused causes them actual physical pain.

While none of the other three songs on this release approach "Why I Love Her" in emotional intensity, they are also equally powerful in their own ways. The opening song, "Last Night O Saud", is a nod to her upbringing in Kuwait. While it was written by a man, Abdul-Aziz Al-Basri, and is meant to be about how he feels towards his beloved, it was made famous by two prominent female Kuwaiti singers, Aysha Al-Marta and Laila Abdul-Aziz.

What's interesting about this song is how Kelani and her musicians have managed to marry Western jazz influences with the syncopated rhythms of the Middle East. Her playing of the frame drum sends a note of discord through the songʹs more traditional beat, but also gives it a distinctive edge, thus heightening the impact. It is a great example of how it's possible to bring together two styles of music while allowing each of them to retain their integrity.

The disc's second track, "Going up the Mountain", is a traditional Palestinian song. According to Kelani, nobody is quite certain of its provenance, but she believes it was written when the region was ruled by the Ottoman Empire as it features a Turkish word in its lyrics.

The song was sung by Palestinian women when they visited their husbands in jail. The song's lyrics were a subversive code which allowed the wives to pass messages of hope to their imprisoned loved ones.

As well as being pertinent today, with so many Palestinians currently imprisoned, it also reminds the listener of just how long they've been without self rule. Going from being occupied by empire after empire or ruled by others they've been a people without title to their own land for multiple generations.

However, Kelani also reminds us that music can simply be fun and doesn't always have to carry a message. The final song on the recording is a cover of the American jazz/blues standard "Mama Don't Allow". Not only do she and the band have a great time performing this tune, it gives us a chance to appreciate her sense of humour as well – she even throws in a kazoo solo for good measure.

Reem Kelani is a powerhouse of a performer, with a voice conveying a rare depth of passion and emotion. This is complemented by her abilities as an arranger that enable her to combine the musical traditions of two cultures almost seamlessly. Although "Why Do I Love Her" comprises a mere four songs, it is the perfect introduction to this great singer and will leave you eagerly awaiting her next release.

Written by the controversial Kuwaiti Shia preacher, Yasser Habib, the film's plot pursues two threads: one from the Islamic past, the other from the present. The narratives meet ... END_OF_DOCUMENT_TOKEN_TO_BE_REPLACED

Anger in the Middle East is spreading over comments made by an official of India's ruling BJP about the Prophet Muhammad, with various countries summoning New Delhi's envoy and a ... END_OF_DOCUMENT_TOKEN_TO_BE_REPLACED

Women's empowerment in the Gulf has become a tool of deflection, rather than a genuine effort to promote women’s full and equal participation in society. By Mira Al-Hussain END_OF_DOCUMENT_TOKEN_TO_BE_REPLACED

Ahead of Ramadan, most Middle Eastern countries have eased restrictions to near pre-pandemic times. However, increases in prices and food shortages due to the war in Ukraine are ... END_OF_DOCUMENT_TOKEN_TO_BE_REPLACED

It is getting hotter and hotter in Iraq. Fifty degrees or more is no longer a rarity. The state between the Euphrates and Tigris rivers is now one of the hottest countries on ... END_OF_DOCUMENT_TOKEN_TO_BE_REPLACED

Germany's foreign policy is explicitly values-based. But what happens, Ralf Bosen asks, when democracy, the rule of law and human rights collide with the logic of trade and ... END_OF_DOCUMENT_TOKEN_TO_BE_REPLACED
Author:
Richard Marcus
Date:
Mail:
Send via mail

END_OF_DOCUMENT_TOKEN_TO_BE_REPLACED
Social media
and networks
Subscribe to our
newsletter