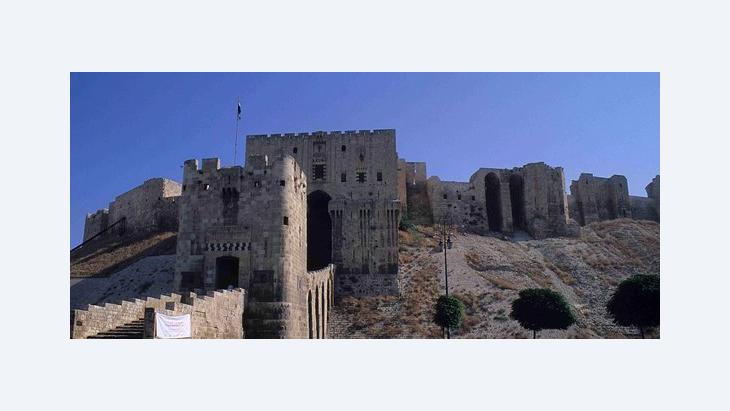 ﻿Large-scale destruction is being inflicted on the unique historical and cultural legacy of the Syrian commercial metropolis Aleppo. And the people of the city had actually only just begun to show an interest in that legacy. By Claudia Mende

One of the world's oldest cities, Aleppo, is threatened with destruction. UNESCO fears that irreversible damage is being inflicted on the global cultural heritage of this city, which uniquely embodies the religious and ethnic diversity of Syria. The organisation is not yet in a position to appraise just how much damage has already occurred as a result of the civil war, and there is also no reliable information currently available within Syria itself.

But it is not just the silent witnesses of a vibrant past that are at stake. Aleppo's historic buildings are also part of the city's multicultural identity. Just as the ancient buildings of Aleppo, this, too, is now at risk of getting lost.

Syria's commercial metropolis can look back on a history spanning 5,000 years. On the hilltop with the mediaeval citadel in the centre of the city – where news agency reports say Assad's troops are bracing for an attack on the rebels – there are traces of human settlement dating back to 2,000 years B.C.

Bastion against the crusaders

According to legend, the Biblical forefather Abraham set his goats to pasture on the hill, and gave the city its Arab name "Halab". "Halab" can mean "milked", and it was therefore said that Abraham milked his goats here and distributed the milk to the poor. 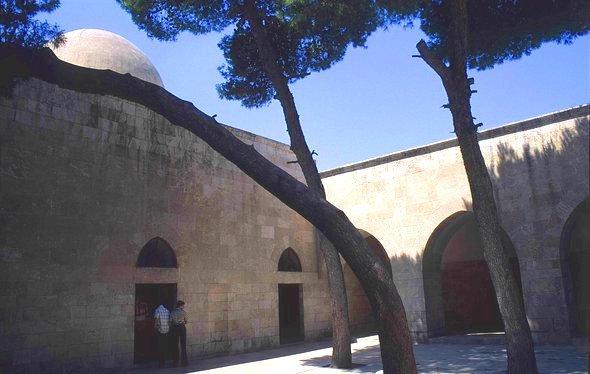 Silent witnesses to a vibrant past: Traces of human settlement dating back to the 2nd millennium B.C. were found on the hill with its mediaeval citadel in the centre of the city. Pictured: Inside court of the Mosque of Abraham in Aleppo's Citadel

​​This story demonstrates how confidently Aleppo itself rates its significance in the history of humanity. The citadel itself was erected in the 12th century and successfully defended the town against the crusaders.

For centuries, the city was located at the centre of trading routes between Europe and the Far East. It attained greatness and wealth in the 16th century through trade with the Italian city states. Tradesmen brought spices and silk from Iran, India and China to meet growing demand from the bourgeoisie in Europe, and stopped en route in Aleppo.

The Aleppo souq – beating heart of the city

To this day, the magnificent lodges, caravanserais, mosques and historic residential buildings testify to the important role that the city played in international commerce. Covering an area of around 350 hectares and with some 16,000 historic houses, the Old City encompasses the largest traditional residential district in the Arab world. Extending an estimated 12 kilometres, the vaulted souq is the largest in the Middle East. In recent years it has retained its status as the beating heart of the city, with thousands of stalls and shops.

Aleppo's architecture mirrors the city's multicultural history, defined by a racial blend of Arabs, Circassians, Armenians, Azerbaijanis and Kurds, and of Muslims, Christians and Jews – although most of the latter were forced to leave the country after 1948. 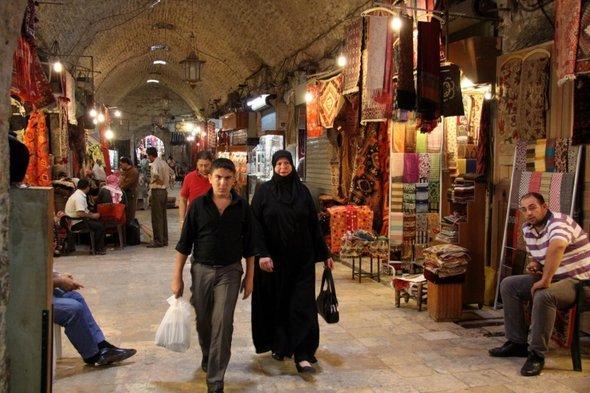 Vaulted labyrinth: An estimated 12 kilometres in length, the souq is the largest in the Middle East and in recent years it has retained its status as the beating heart of the city, with thousands of stalls and shops

​​In the years preceding the rebellion against Assad, Aleppo drew tourists from all over the world. But the people of Aleppo themselves had only just begun to activate their historical memory. It also took city authorities a long time to recognise its worth; until the 1990s large areas of the Old town were falling into disrepair. Those who could afford it moved into districts newly-built in a wave of unfettered modernisation.

The numbers of people living in the Old City halved between 1945 and 1995, with some 100,000 people living there in 2011. Most of those were low-income families, some from rural areas, who moved to the area after wealthier residents had relocated to the newly-built suburbs.

The new residents of the Old City were often not in a position to fund a renovation of their property or repair roofs. Foundations were undermined and cracks started appearing in the walls. In the 1980s, city authorities were still favouring a modernisation approach that involved the demolition of old houses to make way for wide roads for cars, which would partially cut right through the Old City.

Only after protests by the prominent Syrian architect Adli Qudsi and the city's inclusion on the UNESCO world cultural heritage list in 1986, did the city government partially revise its plans and discover the enormous tourism potential of Aleppo's cultural legacy. Over the past few years, Aleppo's local administration has joined forces with international donors to restore the old city centre.

In particular the Aga Khan Foundation and what was then the German Technical Cooperation Agency (GTZ), as well as the small German association "Friends of the Aleppo Old City" threw their weight behind the drive to repair and restore historically significant buildings. As part of the project, residents were able to acquire favourable loans and received technical support. The plan was aimed at improving the quality of life for residents of the area, and halt the depopulation of the Old City. 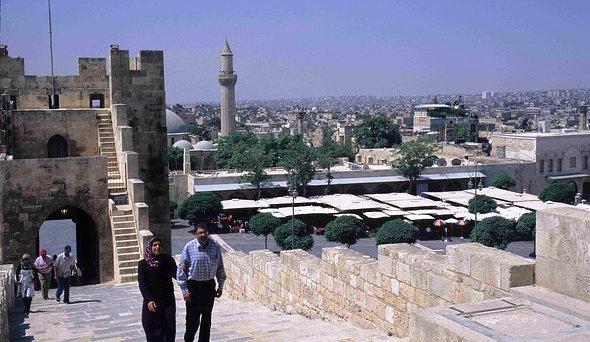 Aleppo's citadel was erected in the 12th century; it successfully defended the town against the crusaders

​​Around one thousand houses were restored in this manner over the past 15 years. A plan to create a pedestrian zone around the citadel hill was partially realised, aimed at reducing traffic and improving air quality in the Old City. Unfortunately it also cut the bazaar off from its customers.

The old city gate to the south Bab Qinnesrin was renovated, as was the "Bimaristan Argun", a mediaeval hospital dating from the 14th century, where even in those days, music therapy was used to treat the mentally ill. The "Bimaristan Argun", one of the most beautiful courtyards in Aleppo, was turned into a small museum documenting the scientific achievements of Arab doctors and scholars.

But it wasn't only international donors who were concerned with the maintenance of the Old City. For a long time, the residents of Aleppo themselves viewed the ancient buildings primarily as a way of attracting tourists to their city.

Interest in the city's history

But in the years before the start of the uprising against Assad, interest in their own history grew. The non-governmental organisation "Adyat" (can be roughly translated as "old things") under the leadership of Tamim Kasmo, a civil engineer with Azerbaijani roots, undertook to encourage greater interest in the city's historic legacy among educated citizens with a series of guided tours and lectures.

The guided tours were increasingly popular. Groups of locals set out to discover the Old City on public holidays, kitted out with digital cameras and notepads, tourists and explorers in their own backyard.

"The residents of Aleppo are only just beginning to understand the scope of their extraordinary cultural heritage," said Jenny Pocher-Marrache, one of the few people with an in-depth knowledge of the history of Aleppo, during a visit to the city in mid-2010. The elderly lady, whose family was a member of the Christian upper class with Austro-Hungarian roots, grew up in the former Venetian trading post "Khan an-Nahazin" (Khan the coppersmith) founded in 1539, and owns one of the city's largest private collections of historic documents and photographs.

Parts of her collection also found their way into the new city archive, established in the year 2010 with the support of the German Development Service. The archive was founded to conserve and make accessible to the public historic documents that were often in private ownership. It was opened on 11 December 2010, in the "Shebani School", a former Franciscan monastery in Aleppo.

But barely had the people of Aleppo began to show an interest in the value of their own city, it is now under threat to an extent that no one could have imagined at the time. Just three months after the opening of the city archive, the first peaceful protests against the Assad regime began in the Syrian city of Dara'a.

How is one to convey the history of Islamic images of Muhammad freed from today’s polarised politics? What are the challenges and pinch points of this particular academic ... END_OF_DOCUMENT_TOKEN_TO_BE_REPLACED

A Tunisian farmer attaches a machine to a cow's udder and sets the pump whirring, but he only expects to fetch less than half the normal amount of milk amid soaring fodder prices END_OF_DOCUMENT_TOKEN_TO_BE_REPLACED

Food prices doubled, salaries halved, banks restricting withdrawals: Egyptians now have the same problems as the Lebanese. But if things get worse here, the fallout will be far ... END_OF_DOCUMENT_TOKEN_TO_BE_REPLACED

Any reconciliation between Turkey and Syria’s Assad regime would have disastrous consequences for many Syrians, explains Syria expert Kristin Helberg END_OF_DOCUMENT_TOKEN_TO_BE_REPLACED

Iraq bears the scars of decades of conflict and has seen its antiquities plundered, yet the House of Manuscripts' collection has managed to survive END_OF_DOCUMENT_TOKEN_TO_BE_REPLACED

END_OF_DOCUMENT_TOKEN_TO_BE_REPLACED
Social media
and networks
Subscribe to our
newsletter