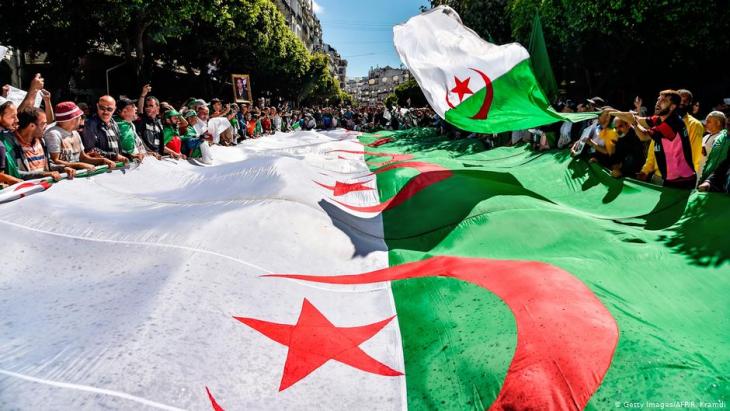 For more than four months now, protesters in Algeria have been urging a clean-up of the country's politics and a new constitution. But how realistic is change given the military's iron grip on power? By Dalia Ghanem

Algeria, where power has long been firmly consolidated in a deep state, has seen mass peaceful protests since 22 February. What started as student protests against the former President Abdelaziz Bouteflika's bid to run for a fifth term after twenty years in power, grew to a nationwide movement pushing for a clean cut from the past and a new republic with a new constitution.

There is no date scheduled for elections in Algeria after a ballot slated for 4 July was postponed in early June.

As a result of the extended protests, the military, the real locus of power in Algeria, switched its allegiances and pressured President Bouteflika to renounce his bid to retain his rule. Several political figures, powerful former intelligence chiefs, business tycoons close to the Bouteflika inner circle and the brother of the former president, Saïd, have since been arrested and investigated on corruption charges. In application of article 102 of the constitution, Abdelkader Bensalah, who heads the National People's Assembly (NPA), was appointed as interim president with a caretaker government. In the absence of a date for the next elections, it seems that Bensalah's mandate, which expired on 7 July, will likely be extended until the next presidential election.

These measures have not quieted the protesters. On the contrary, the vast majority of Algerians view them as purges by the military leadership, aiming to settle scores, get rid of opponents, retain power and restrict political participation. In response to continued dissent, the authorities banned all protest and public assembly, with permission only granted for the regular Friday protests. Ahmed Gaid Salah, a military officer who called for President Bouteflika to be declared unfit for office, insisted on "the convergence of visions between the army and the people," and urged the people to stop "certain irrational demands, such as the demand for the collective departure of all state officials."

Four months after the beginning of the mass peaceful protests, the political situation is untenable. On the one hand, the military is failing to reassure protesters that it is willing to change the system. On the other, the popular movement can't agree on a leadership to voice precise demands and initiate negotiations. 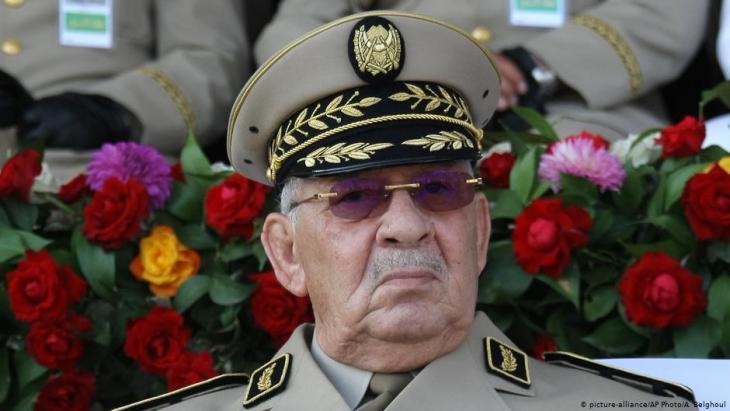 Ahmed Gaid Salah, chief of staff of the Algerian People's National Army (pictured here), is the most powerful man in Algeria right now. In late March, he called for President Bouteflika to be declared unfit for office, insisted on "the convergence of visions between the army and the people," and urged the people to stop "certain irrational demands, such as the demand for the collective departure of all state officials"

Intertwined interests of those in power

Algeria's opaque power structures dent chances of any transition to a genuine democracy that involves more than just calling Algerians to voting stations every five years without offering a real choice. The regime consists of various actors and intricate circles of power, with the central ring comprised of top senior members of the People's National Army (PNA), political leaders from the ruling-party National Liberation Front (FLN) and its twin the National Rally for Democracy (RND) with close ties to the PNA constituting the second circle, and influential business tycoons forming the third circle. To protect these intertwined interests and prevent any broad-based rejection of the status quo, the regime has been using fragmentation, co-optation, manipulation and the silencing of opponents.

Meanwhile the military's grip on power also hinders a transition. In light of the current situation in Algeria, it is safe to say that the army is now directing, instead of moderating, the political system. The PNA is one of the most professional and modern armies in the Arab world. However, this modernisation and professionalisation did not translate into more democratic values and the military's disengagement from politics.

According to the Bertelsmann Transformation Index (BTI) 2018 survey on Algeria, there is a widespread sense of political powerlessness. "The population feels it must rely on personal influence or violence to force the administration to act. In general… it is still felt that the 'deep state' (i.e. the army and security forces) seems to take all relevant decisions with little democratic control." Highlighting this weakness, the BTI report rated Algeria's commitment to democratic institutions at just two out of a possible 10 points. 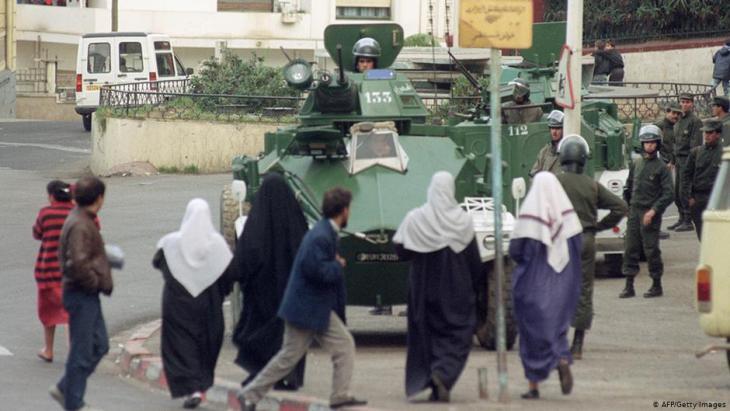 According to Dalia Ghanem, the Algerian military in the 1990s "played a pivotal role in the war against jihadism during what came to be called the 'black decade' (1992–2001). More than ever, the PNA perceives itself as messianic and more patriotic and knowledgeable than civilians. As a result, the military is unlikely to bow to civilian authority." Pictured here: army tanks in Bab El-Oued, Algiers, in 1992

Among officers of all generations there is an entrenched institutional, militaristic, and paternalistic culture. That has historic roots: In the 1950s, the army played a crucial role in the war of independence against the French (1954–1962), in the 1960s and 1970s, it was an agent of change and socioeconomic development, driving Algeria's industrial growth. Then, in the 1990s, it played a pivotal role in the war against jihadism during what came to be called the "black decade" (1992–2001). More than ever, the PNA perceives itself as messianic and more patriotic and knowledgeable than civilians. As a result, the military is unlikely to bow to civilian authority.

Given the military's dominant role, reform is difficult and repression is dangerous – but as of now, both options are on the table. If the first option materialises, substantial reforms and changes to the constitutional rules must take place. The military will be able to negotiate the transformation of the system with selected civilian partners, as well as discussing its planned withdrawal of power while imposing its conditions to preserve its continued influence.

If the army pursues the second path, that of repression, it will once again block transition and break its ties with the people – as happened in 1988, 1992 and 2001. It is unclear whether the military would choose to clamp down on the populace as this would endanger its relationship with the population. Repression also risks undermining the cohesion of the army and may spark conflict between the political-military and the professional one, between high-ranking officers and NCOs or junior officers.

Both the military and the general population (assuming they manage to agree on a leader) need to talk to enable a transition that would satisfy the protesters' concerns while reassuring the military that its corporate interests and institutional structures will be protected. The window of opportunity for negotiated and meaningful change will only be open for a brief period. Failure to agree to a resolution would mean that the patterns and practices inherited from the previous regime will be resurrected, making it even harder to achieve change.

Dr Dalia Ghanem is an Algerian resident scholar at the Carnegie Middle East Center in Beirut. Her work examines political and extremist violence, radicalisation, Islamism and jihadism with an emphasis on Algeria.

The coronavirus pandemic brought mass pro-democracy protests in Algeria to an abrupt end. Exploiting the distraction engendered by the health crisis, the new Algerian government ... END_OF_DOCUMENT_TOKEN_TO_BE_REPLACED

Algeria has not found peace since Abdelaziz Bouteflika, who was president for 20 years, resigned under massive public pressure in April 2019. On 1 November 2020, the government ... END_OF_DOCUMENT_TOKEN_TO_BE_REPLACED

Ten years after the start of the Arabellion in North Africa and the Middle East, many view the movement as a failure. But rather than being over, it has now entered a more mature ... END_OF_DOCUMENT_TOKEN_TO_BE_REPLACED

Algeria's recent referendum was a thinly veiled attempt to hijack the agenda of the country's popular Hirak protest movement. Yet the people are no longer willing to accept ageing ... END_OF_DOCUMENT_TOKEN_TO_BE_REPLACED

Now that the COVID-19 crisis in Algeria has eased significantly, Algerian authorities are once again cracking down on migrants with extreme severity, expelling thousands of people ... END_OF_DOCUMENT_TOKEN_TO_BE_REPLACED

END_OF_DOCUMENT_TOKEN_TO_BE_REPLACED
Social media
and networks
Subscribe to our
newsletter